I read “Rinaldi’s Revenge” due to part of a documentary I recently began watching – the BBC series “The Private Life of a Masterpiece.” Covered on one disc that featured some Italian Renaissance paintings was a three panel work I hadn’t paid much attention to during my study of famous artworks. But learning the history behind the subject jarred my memory of seeing this book offered by Harlequin. The painting is Paolo Uccello’s The Battle of San Romano which tells of the victory won by the famous 15th century condottiero Niccolo da Tolentino. Ah, serendipity!

“Duchess Elena de Carisenda fears her small but wealthy duchy will be taken from her by force. Her only chance for survival is to hire an army to protect her and her people–and mercenary Marco Rinaldi is the best soldier money can buy.

Marco pledges to fight off all invaders, but one look at the beautiful duchess and he insists he’ll pose even more of a threat if he and Elena wed. Strong and commanding, he awakes the sensual woman deep inside her, but soon it is apparent he harbors a dark secret. Is their marriage part of a plan for revenge?” 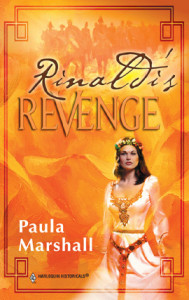 This is a reissue of a book first published in 2002. I had forgotten how much a little more word count allowed authors in past years to add to the depth of the story and characterization. But it also reminded me that sometimes a bit more editing can be a good thing. “Rinaldi’s Revenge” starts slowly and with lots of clunky information snippets – only some of which seem to actually be needed. I do love to learn new things, especially historical information, but only if it adds to the story. If it feels like a “hey, here’s something cool I learned while researching that I felt I just had to wedge into the narrative somehow” then I’d rather it be left out. But on the other hand, there’s no doubt that the story is firmly set in its time frame.

I enjoyed the character of Elena. True she’s a typical “sheltered woman unexpectedly thrilling to a virile hero” but she recovers fairly well from her initial “zoing!” and doesn’t stand in a puddle of drool, gaping like an idiot. She’s probably not a typical 14th century woman in that she’s been raised by her Duke father to be his heir and thus is better educated, more used to speaking her mind and ruling. Yet this also makes her more interesting and understandable to modern readers. Still, she avoids being the dreaded overly feisty, kick-ass female.

Marco manages to be an alpha without being an asshole. He’s caught on early to how smart Elena is and seems impressed. Also he’s a Lord of some small township so the ultimate marriage isn’t so far out of line. And no one’s really, truly holding out for love. Even Elena is fairly down-to-earth in her beliefs about being able to marry for love and when the subject is broached, she looks at the marriage from a tactical standpoint as well. It’s obvious that Marco isn’t all that he at first appears to be and hints are dropped from early on as to his true past. I like that these hints don’t club me over the head but rather slowly fall into place and build up to the ultimate reveal.

The romance is evenly balanced as far as Elena and Marco falling early for the other, even if they’d deny it at this point. The power balance issues that I often have with historicals are countered with several things. She’s the ruler in charge and has been raised for that role. He’s got some kind of secret background that raises him above a standard jumped up peasant and is a take-charge soldier doing his job. The resolution of their differences actually worked well for me. Elena isn’t used to being left out of decisions that affect her Duchy but Marco isn’t used to consulting a woman. However, it isn’t simple misogyny on his part. He honestly never thought that she’d be interested in it and was going on the premise of “she hired me to do a job and I’m doing it.” When Elena gives him a reasoned and logical argument rather than hysterics and miffed feelings, he pauses, thinks about it and realizes she’s right – war is another form of statecraft and that is what she is used to being in charge of. Marco still occasionally has to stop and remind himself that from now on he and Elena are a pair and make decisions jointly but this transition for him seems well established by the end of the story.

As much as I like how well their relationship progresses, I do question whether they have a realistic wedding night. One brief bit of pain for virgin, untutored Elena and then it’s ecstasy, baby, all the way! And then comes the next day argument followed by the “I’m furious at you! Let’s f*ck!” scene.” The day after her wedding night and up against a wall? Elena is a quick start at this, eh? Then it’s every time ending in ecstasy. I mean every, single, damn time. Climbing the cliffs of ecstasy, touching the sky of ecstasy, going over the waterfall of ecstasy, shooting off the rockets of ecstasy… okay, I’m over-doing the silly here but every, single encounter – including her first time – is out of this world? This could be turned into a drinking game.

In regard to the external conflicts, the book features a fairly standard host of potential flies in the ointment from city advisers on the take to neighboring city rulers who would just love to add the wealthy duchy to their own holdings plus the early hints of hidden motives Rinaldi has. All of them seemed believable and reasonable as sources of issues for 15th century Italians to deal with. I also liked how the conflict was maintained throughout the course of the story – both internally and externally.

So, why a C+ final grade? There’s perhaps a bit too much time spent on descriptions of things and people. A little is good but it got sorta plodding in places. And there is lots of talk vs do, telling vs showing. Maybe it’s just me reacquainting myself with a slightly older style of writing but there were enough times when I felt a bit of pruning was needed here and some time was needed actually seeing something happen vs being told about it that brought down my happiness in the subject matter used and locale of the book. C+

→ Jayne
Previous article: REVIEW: The Lady Who Broke the Rules by Marguerite Kaye
Next Post: Daily Deals: A comedic travelougue; retelling of fairytales; and two books authored by a couple historical romance staples