We did a series of reviews of Georgette Heyer novels here last year and it dawned on me just how many I hadn’t read. A recent comment here about this book mentioned that it was funny and when I remembered that it is a Georgian, that made up my mind as to which of La Heyer’s books I would try next. Carrie G, thank you!

I’m going to pinch this summary from Publisher’s Weekly because to try and get my head around the whole plot would take me a week.

“An impetuous young lady and a fugitive nobleman…
When spirited Eustacie stumbles into a band of smugglers, she is delighted to be having an adventure at last. Their leader, young heir Ludovic Lavenham, is in hiding, falsely accused of murder. Pursued by the law, Eustacie and Ludovic find refuge at an unassuming country inn.

And the delightfully sensible couple who try to keep them out of trouble…
The resourceful Miss Sarah Thane and the clear-thinking Sir Tristram Shield gamely endeavor to prevent Ludovic’s arrest and Eustacie’s ruin as the four conspire to recover the missing talisman ring that will clear Ludovic’s name.”

What fun! When I loaded this ebook on my reader, I was stunned at the length and thinking that it would take me days to get through it but each time I dragged myself away and came up for air, I would be shocked to see how much of the story I’d swallowed in another gulp. The book practically read itself. Though the plot is carefully laid out as to why young Ludovic Lavenham is thought to have murdered someone, and of how events unfolded afterwards, I soon found that these pesky details wafted away as I got caught up in all the memorable characters, witty dialogue, near misses, and delightful romance. And while the charges against young Lavenham are serious and the danger only to real, honestly, it was fairly obvious from early on that nail biting suspense wasn’t really in the cards in this book. No, what captures the imagination is how deftly Heyer weaves the story, working now this part and then that, and how she moves her characters around each other like chess pieces. It’s more a riveted “now what’s going to happen next?!” instead of breathless “omg, someone’s going to die!” 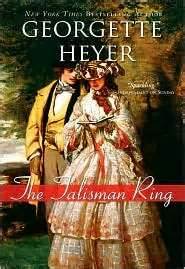 When I read the description of the two sets of characters, I had a flashback to my feelings about the young lovers of “Powder and Patch.” I saw them one way “back in the day” and with maturity, I find that they amuse me as an older woman is charmed by the rashness of Bright Young Things so intensely in love. I had a feeling that Sarah and Tristram would resonate with me more and this is the case. Still Ludovic and Eustacie are like delightful quicksilver. They’re energetic, sometimes rash, hurl themselves into anything and are brave to the point of idiocy at times but you can’t fault their determination or zest. Wanting an Adventure, Eustacie heads off to find it and to avoid a ‘mariage de convenance’ at her dying grandfather’s orders. She wants some Excitement, darn it!, and she’s going to get it. Reading her dramatic imaginings – such as what she’d wear in a tumbril on her way to the guillotine in order to present just the right image or how Tristram would be the type of cold husband who would not ride ventre a terre to her deathbed after being hauled out of a gaming hell – are hilarious. I think, perhaps, the events of the book wise her up just enough that she might not indulge herself in daydreams quite so much from now on. Ludovic is stunned to discover this spitfire, who’s come across him in his role of free trading, is actually a relative but he quickly realizes that she’s the woman for him – almost as soon as she catches on that he’s the one for her. He’s also the type who has to be dragged away from danger and – sometimes forcibly – stuck in a cellar for his own good. One exchange between them says it all. “Don’t you know you’re marrying a ne’er-do-well?” “Certainly I know it. It is just what I always wanted,” she replied. Life with these two will never be dull.

Meanwhile, the romance between Tristram and Sarah is a delight. Here are two thoughtful, intelligent and rational people who at first don’t quite know what to make of each other. Soon, however, they begin to develop a deep appreciation for the talents of the other one – even if Sarah doesn’t draw, something which the men are dumbfounded to learn since all females are taught the skill, aren’t they? Listening to them tease each other with their dry wit and deadpan delivery made my day. I think I enjoyed their courtship more just because it’s not something that gets rushed into or settled immediately. It’s subtle and requires the attention of the reader to catch the little steps forward. The youngsters know in a flash but watching Tristram and Sarah discover each other over the course of saving Ludovic and keeping Eustacie from doing anything foolish is like a nice mug of hot cocoa, sipped while wrapped in a snuggly blanket with someone you love. It’s delicious, romantic and lasting and with the promise of something intense later on. Don’t believe me? Wait for what Tristram says he will make sure is included in their marriage vows.

Two romances, the Georgian setting, some daring do and a heroine who is allowed to be sensible and is loved for it? Win for me! Plus the “blood will tell” stuff is kept to a minimum and there are some seriously wonderful secondary characters – I would love to read about Sylvester Lavenham’s life – to boot. I agree with the opinion that this is one of Heyer’s best lively romps.  A