REVIEW: Mine Tomorrow by Jackie Braun 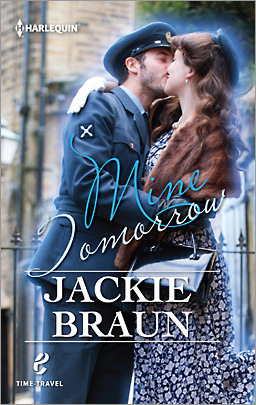 Devin Abernathy secretly dreams of escaping to a simpler time. It’s why she owns a vintage clothing shop, fulfilling her lifelong fantasy of surrounding herself with period style. All she has to do is slip on a garment to be spirited away to a bygone era—in her imagination, anyway. But lately she’s also dreamed at night of a passionate affair with a handsome World War II naval officer named Gregory Prescott, who seems oddly familiar.

Fantasy becomes reality when Devin dons a mysterious estate-sale coat and is suddenly whisked back in time—to New York City in 1945 on V-J Day, where she’s welcoming Gregory home with open arms and ruby-red kisses…. All she wants is to stay in his powerful embrace, but to do so means choosing between his past and her future.

Okay so this is a novella – maybe a long novella – but still short so my question on starting it is “will I believe in the HEA as it zips towards me at the speed of sound?” You’ve neatly taken care of that by Devin having dreamed of Gregory for years. She knows his face, she knows he loves her, she knows she (at the very least) has the hots for him. He is, literally, the man of her dreams. So when she finally actually meets him, most of the heavy lifting of falling in love is done.

Since she’s also described as someone who loves the 1940s more than any other time period – the clothes, the manners, the style of living – she fits in a bit better than the average TT “fish out of water” character. Good thing Gregory already knows she can’t cook so the antiquated kitchen doesn’t trip her up either. The quasi reincarnation “memories” that she has also come in handy in allowing her to “blend.”

This is where I found myself a little disappointed though I think it might be due to word count space constraints. Here’s Devin, in the decade of her dreams for over a year and we learn almost nothing about how she views the reality of it. Earlier on she had wondered what she would think of the racism and sexism prevalent then. She also comes face to face with the lack of wrinkle free fabrics and handy kitchen appliances but there is no mention how she coped with or learned about any of it.

The story is also remarkably free of concerns about TT, any specifics of how it works, how it doesn’t work, when it works, etc. Readers more obsessed with this just sit back and accept it. Let concerns about all this roll off.

The extent to which Devin keeps believing her initial foray into TT is all a dream goes to extended and almost unbelievable lengths. Vivid dreams are one thing but tactile dreams with boinga-ing, getting dressed, travel … I like that there is initially something that she can hang onto in order to keep from screaming in disbelief still it does go on. But then, this a TT novel so I need to let loose. When first Gregory and then Emmie are told about Devin’s Big Adventure, they are suitably wide eyed and “don’t say anything that might set off the crazy lady” so that made me happy rather than having them accept it immediately.

The way the story ends, we’re left with a HEA but as I closed my ereader I did begin to ponder some issues. In this modern age of technology where no one can go unnoticed by gov’mint how is Gregory going to be eased into society? With his SS number, he’s going to look like a 90 year old man. How will he get a job, get health insurance, get anything like that? I know, I know, I’m taking this all too seriously.

Gregory is a great hero with a wonderful romantic streak. I did feel that the two of them were deeply and truly in love. The finale of who ends up where did allow for them to end up with a HEA plus family relationships intact. I did enjoy the story despite what I wished had been explored that wasn’t. But without the issues and questions related to the difference in eras being answered, I did wonder why they were mentioned at all. C+