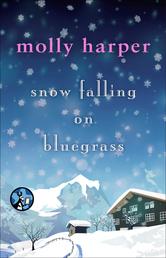 NOTE – this series is in e or audio only.

A love triangle of colleagues heats up the winter lodge where they get snowed in for a week.

Kentucky Tourism Commission employee and executive assistant extraordinaire Kelsey is known around the office for having everything under control. So it’s not surprising that she and her boss, Sadie, have everything planned to the second for the office winter retreat. But there are things even Kelsey can’t micromanage.

An unprecedented snowstorm smothers half of Kentucky and knocks out the power, closes the roads, and generally shuts down the state. Luckily, the lodge has working fireplaces and enough food to keep the staff from turning on each other like something out of The Shining. Kelsey wouldn’t mind being stuck inside if it wasn’t for the tension with her not-so-secret crush, Charlie, the office’s statistician. But handsome Ranger Luke, the lodge’s only employee on hand, is there to take Kelsey’s mind off her discomfort.

Even though this weekend is supposed to be a planning session for KTC, Kelsey can’t help her mind from wandering and finds herself conflicted over Luke and Charlie. Someone’s love will keep her warm, but whose will it be?

Somehow this one escaped my notice when it was released but as soon as I knew it was out, I was all over it. This is the third book in this series but the previous two are only briefly and succinctly recapped. Both h/h’s appear here but are included to show how their relationships are progressing rather than merely to hawk their book. I’ve been waiting for Kelsey’s book and you answered my need to know if she was finally going to get shot of her deadbeat, loser boyfriend and hook up with the hot, geeky guy at work.

Only technically things don’t happen “at work.” Asshole Boyfriend Darrell has already exited the scene leaving Kelsey with a fistful of unpaid bills he’s run up in her name even before the entire staff of Kelsey’s workplace leaves for their annual retreat – thank God my work place doesn’t have these Kumbaya/survival meetings from hell – just as Snowpocalypse hits the state. It seems that the characters of this series often need to be in enforced proximity with potential loved ones in order to work out their issues but this isolation is taking it to extremes.

As the story kicks off, I am loving Kels’ snark and humor. She makes me laugh with her worries that if zombies ever happened, she’d be attacked while in the shower thus becoming the only naked zombie with a loofah. When the lights go out and her coworkers begin to panic like barnyard fowl, she lightens the mood with conjectures on which of them would get eaten first if they run out of food.

But she has her focused moments of defending her boss Sadie against attacks from outside staffers sent to “monitor” them, getting the staff organized for Life without Electricity, and vowing to get to know her coworkers better. Kelsey’s genius is organization and we see her hard at work throughout the two week snowbound retreat.

As with the first two books, this is a paean to the great state of Kentucky – which I happen to love anyway so I don’t mind reading more about it – but haters or those uninterested in learning more about the Bluegrass Commonwealth beware.

What is the deal with Charlie? Since story is from Kelsey’s POV, his thoughts and motivations and intentions are hidden. When he finally tells Kelsey how he feels, it’s nice, it’s great, it’s wonderful for her but I did shake my head a little and wonder how two people could so totally miss their signals. For years.

Kelsey is definitely not an isolated heroine in that she has strong relationships with two of her female co-workers and 4 tech/nerd male neighbors. Even though she mentions some ditsy past moments, she’s also good and effective at her job thus avoiding one of my pet peeves – The Pratfall Heroine for Comic Effect.

The story is racing along and going well once Kelsey and Charlie get their signals clear only to suddenly bog down with a Big Mis. Then this gets cleared up and I’m left shaking off Plot Whiplash and wondering why those short few pages of misunderstanding were needed. Once the staffers are back in civilization, the other lingering issue on Kelsey’s life gets taken care of – thankfully in more or less legal fashion – and the HEA shines brightly as I power down my ereader. Without the Big Mis this one would have been a higher grade for me but with it, I’m afraid it dips to a B-