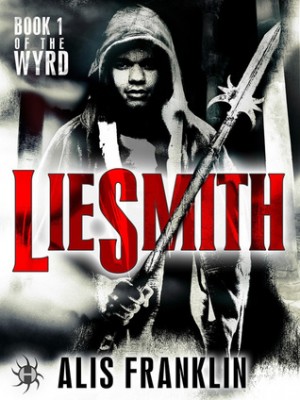 Working in low-level IT support for a company that’s the toast of the tech world, Sigmund Sussman finds himself content, if not particularly inspired. As compensation for telling people to restart their computer a few times a day, Sigmund earns enough disposable income to gorge on comics and has plenty of free time to devote to his gaming group.

Then in walks the new guy with the unpronounceable last name who immediately becomes IT’s most popular team member. Lain Laufeyjarson is charming and good-looking, with a story for any occasion; shy, awkward Sigmund is none of those things, which is why he finds it odd when Lain flirts with him. But Lain seems cool, even if he’s a little different—though Sigmund never suspects just how different he could be. After all, who would expect a Norse god to be doing server reboots?

As Sigmund gets to know his mysterious new boyfriend, fate—in the form of an ancient force known as the Wyrd—begins to reveal the threads that weave their lives together. Sigmund doesn’t have the first clue where this adventure will take him, but as Lain says, only fools mess with the Wyrd. Why? Because the Wyrd messes back.

I heard about this book from a couple of online friends and when I saw the blurb I was all over it and asked Jane if she could get a review copy for me.  There is a lot that is great about this book – the concept is certainly fresh and the writing is engaging. I enjoyed the way queer was portrayed.  (I haven’t tagged the book “m/m” because neither character identify as gay). But.

I think the book assumes a familiarity with Norse mythology in general and the Loki mythos in particular. Unfortunately, prior to reading, the sum total of my Loki knowledge was based entirely Tom Hiddleston’s performances in the Marvel movies. I’m here to say that’s not enough.  I suppose for readers who don’t mind a little (or a lot of) confusion or who are happy to wait a great deal of time for explanations and who don’t mind some things not being explained at all, Liesmith might work better.  I’m not that kind of reader.

I don’t mind looking things up – there are often words I don’t know or things I have questions about but when it is is a near-constant interruption to my reading as was the case here, something isn’t working.  It’s not just that the book is a modern Loki myth. It’s that it takes the old stories and gives them a twist.  To understand what was twisted, you have to understand the original. There is some explanation in the book – it is doled out sparingly (I expect this was in an effort not to info-dump – which, on its face, is a good thing) but then some of the explanations end with “stop me if you’ve heard this before…” or “you know how the story goes”.  The problem was, I hadn’t heard it before and I didn’t know how the story goes.  So I had to look it up.  That happened a lot. A. LOT.  Just when I felt I was sinking in to all the good and entertaining parts of the story, I’d be interrupted again by something I didn’t understand and then I’d have to spend some time looking it up.  Sometimes it was easy but sometimes, it involved a bit of fossicking and that took time.  When I got back to the book, I felt like I had to pick up a complicated cat’s cradle all over again. I’d read, relax, become confused, feel stupid, Google something… – rinse, repeat.  In the latter third of the book, I tried not looking things up and just going with it.  I’m not sure I fared any better that way.  I was confused by the ending. It was a little too opaque for this reader.  But then, I tend toward the more obvious anyway.  The people who recommended it to me didn’t indicate they had any difficulty with following the story, so it is quite likely others will not share my confusion.

I’m also not a gamer but my husband is so I felt like I could mostly follow along with the many gaming references in the story and there at least, I felt a little more like I was in on the joke.

Sigmund wondered when he’d started running on video game logic. He figured this was the sort of thing lobbyists warned about.

There was a device commonly used in the text which threw me a bit.  It looked something like this:

—heavenward. “Con call to our Chinese manufacturer,” he said.

In the book, the part I have bolded is in italics.  The one above makes complete sense and is easy to follow but that was not always the case (for me at least).  For instance, the first time I saw (jotunn) interrupting a narrative train the connection wasn’t anywhere near as obvious to me.

I really liked how Sigmund wasn’t the typical romance hero.  He wasn’t even a typical romance geek.  He is a bit on the chubby side, has acne and is developing a double chin. He’s not very good looking – except for when he is passionately involved in something and then there is a light in his eyes which makes him interesting.  He’s… ordinary in many ways.  He’s the kind of geek you might actually know rather then the ones which commonly populate romance novels (ie the ones which are secretly gorgeous).  Lain is an altogether different type of romance hero too.  I can only applaud this.

I enjoyed the humour in the story – there are a lot of heavy battle type scenes and things get pretty dire for many of the characters, so it lightened the atmosphere considerably and provided a break in the narrative tension here and there.

“I hate to break it to you, but that guy makes Stephen Fry look straight.”

“Ohmigod, how are you alive?”

“I thought he was just British!”

The romance is sweet, not very explicit and the story has a hopeful happy-for-now ending.  The relationship is really just beginning so it fit.

I really liked that the book was set in Australia and that some of the Dreamtime myths were mentioned to give the story some local flavour. There is some idiom used which might confuse some US readers but there is not a lot of it so I think it will be okay.  I wasn’t sure about the cover. The guy on the cover looks like he could be an Aboriginal but neither Lain nor Sigmund have that ethnicity so I’m not sure who he is supposed to be.

I found the book hard to grade because my overwhelming feeling about it is confusion. I just felt lost a lot of the time and I’m really not sure how much of that is on me and what kind of reader I am.  However, while I was often confused I was also often charmed, so I’m going with a C.