Two of LAPD’s finest, Officer Jeff Chandler and his partner Mickey Stanton, have been together on duty for three years. When Mickey first met Jeff, a lateral transfer from Rain City- Seattle, he was crazy about him. When the men were assigned to a two-man patrol car, Jeff and Mickey’s attraction blossomed. And from then on, it was playtime!

On the street, Jeff and Mickey were tough and fearless, doing their job to protect and serve, but the testosterone charged pair were wild and out of control with their passion for each other. They loved doing risqué acts on duty and craved the adrenalin rush, until Jeff becomes burned out with patrol. His ambition is to rise up in the ranks. Soon the two men are at odds with what direction their careers should take, and Mickey resents Jeff for wanting to split up their team.

As friction begins to develop between them, they still have to continue battling the crime on LA’s streets. Between the raging fury and the sexual heat of their relationship, there is true love, and that love is put to the ultimate test, nearly ending in tragedy.

‘Top Men’- Mickey and Jeff- The police officers you grew to love from GA’s Action! and Hero Series, back again to give fans a wild ride into the darkest secrets and desires of COPS.

I like police dramas so when I saw that your new book featured cops as the two main characters and seemed to be about everyday police work, rather than a flashy investigation of one crime I decided to give your work another chance. I have only read one of your books in the past and it did not work for me. 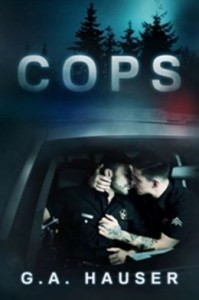 Let me start with what I liked. I liked that Mickey and Jeff are shown doing ordinary patrol work, which may not be catching maniacs or violent criminals every single day, but which is important, and I wished that had been shown more. I liked a lot that the book is about an established couple and that the main conflict was about what directions they wanted their professional lives to go. I thought the set up for the conflict was awesome, actually. I hate when I am reading about a fake, superficial conflict which the author uses to move story forward without paying attention to whether the conflict makes sense for who the characters are. In this story the conflict made perfect sense to me. Unfortunately the execution and how it affected the characters story arcs made much less sense.

As the blurb tells us, Jeff is burned out on patrol, and as much as he loves being in the car with Mike, he wants to move up and maybe do something which does not require him to be on patrol every day. He does not tell Mike that he is thinking about this (the word *thinking* is imperative here, he has not done anything yet). Mike learns about it and reacts, well, should we say over the top? In fact, *Holy overreacting Batman* is the only response I have had about his raging.
It is not even a Big Misunderstanding issue; these two just have problems communicating about important issues. I would have loved to see that by the end of the book they actually learned to communicate better – not perfectly mind you, just better. Alas, I did not get that impression. Oh they promise to talk about the ways they want to advance their respective careers … in a year. So the character growth is what, postponed?

In the meantime sex seems to be their response to everything, or at least that was the impression I got. The blurb’s line that “they loved doing risqué acts on duty” is certainly correct. Sorry, but cops who decide that it is okay to have sex while they are on patrol in their car and in several other places make me very annoyed and I just cannot think of them as even close to realistic police characters. It is even more annoying in this book because in places the story has a very realistic feel, but then the realistic feel would vanish, which led to me rolling my eyes more than once. The author’s bio states that she worked as a cop, so I would imagine that this is where the realistic feel comes from, but was it really necessary at times to change her characters to sexually obsessed clowns rather than strong men who do a dangerous and exhausting job and try to do it well?