“Henry meets Christa on the west tower of the Brooklyn Bridge, just as they’re both about to jump off and kill themselves. Despite his paralyzing depression—and her panic over a second bout of cancer—they can’t go through with their plans knowing that the other is going to die. So they make a pact—they’ll stay alive for 24 hours, and try to convince each other to live.

From the Staten Island Ferry to Chinatown to the Museum of Modern Art—Henry and Christa embark on a New York City odyssey that exposes the darkest moments of their lives. Is it too late for them? Or will love give them the courage to face the terrifying possibility of hope?”

When Jane sent me the email with the blurb of your newest novella I told her, something like, “That’s just different enough that I’m interested in trying it.” I mean I honestly can’t think of another romance story that starts with a duel/dual suicide gone wrong. Maybe that’s not the response that every author dreams of but it got me to read the book, right? I mean no disrespect to anyone going through the mental and physical pain these two characters have to deal with but the set up of the story is truly unique. 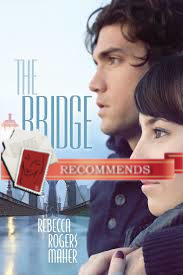 The Bridge by Rebecca Rogers Maher [Contemporary]( A | BN | K | S | G )
From the beginning the story takes on a grim humor that had me laughing. Christa and Henry have both chosen the same early morning time and place to jump to their deaths off the Brooklyn Bridge. They’ve even thought about which side would be better to jump from – as they discuss later in an almost surreal scene while they eat ice cream – and come complete in black clothes so as to be less visible and thus stoppable. When what they think will be a private last moment is abruptly squashed by the presence of the other, annoyance is the emotion that quickly surfaces.

“What the hell are you doing up here?”
Of all the things she could have said, this is not what I expected. She looked fragile a minute ago, delicate. I’d feared scaring her.
But I’m the one who shrinks back now.
I could say the same thing, after all. I want to say the same thing. What the hell are you doing up here ruining my perfectly good suicide attempt? Was there a sign-up sheet or something that I didn’t know about? Or more succinctly: Get out of my way. But there are some rules of civilization you can’t flout, even in extremis. A question is asked; you must answer it. Not to do so would be rude, and I’m not a rude person. Even when being yelled at by a stranger.

But they’re basically good people and what quickly follows – once they both acknowledge that the moment to jump is past for the morning – is the desire to help the other. To show him/her that s/he does have something to live for. To save the other as his/her last good deed on earth. Over an early morning breakfast they make their bargain. Each has three things they will do together over the coming 24 hours and maybe, though neither plans to change his/her mind, the other will have a change of heart.

Christa and Henry both have eminently – I hesitate to use the word – good reasons for why they plan to commit suicide. Perhaps understandable is a better choice. He’s lived with a lifelong depression while she’s facing a second diagnosis of breast cancer. Once the other is told what is behind these choices, Christa and Henry both fight each other’s decision.

Readers will have to decide how to view Christa and Henry’s backgrounds and choices but you do a good job in presenting them without judgment and describing what might be incomprehensible to anyone who’s never faced what they do. Henry is exhausted by living in a tornado of mental pain and despair while Christa views facing another round of debilitating chemo treatments, with the very real possibility of dying anyway, as an endless desert to cross with no water or help in sight.

While Christa and Henry might not totally understand each other’s reasons, and their discussions do lead to arguments about whether or not those should lead to the finality of suicide, they do understand each other’s pain. Finding someone who does that without then resorting to pat “feel good” answers or knee-jerk reactions begins to build links between them that leads to feelings each doesn’t particularly want. An awakening of emotions – including pain – like raw nerve endings suddenly stimulated. They both thought they were numb to this but discover differently.

I like that punches aren’t pulled. Christa and Henry are honest about why they ended up on that bridge. Some readers will understand and some probably won’t. Their issues aren’t made light of and are still there when the book ends. The things they didn’t want to face still exist and just maybe those things will win in the end. Who knows? But for now, they’ve found each other, hope and a new will to try again. And I’ll say that I appreciate this unique book that presents characters with bone deep issues that can’t be solved by a quick conversation or better communication. B+