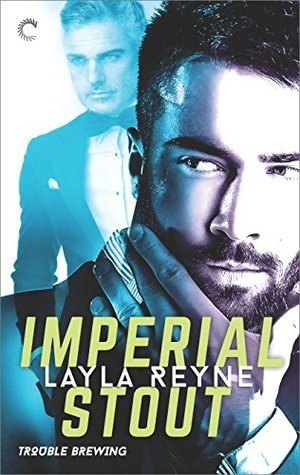 I have most of your first romantic suspense series, which began with Single Malt, on my TBR but I haven’t actually read any of them yet. I’ve heard good things about them (which is why they’re on the TBR) but catching up on even four books feels like a big ask so I thought I could start here, with your spinoff series set in the same universe. That was a mistake. Imperial Stout does not stand alone well. I’m not sure how much of this was my fault for not understanding the two series’ are so closely interlinked.

I spent the first half of Imperial Stout wondering what was going on and who all these people were. There was very  little recapitulation of how everyone got where they were and who everyone was. For those who have read the previous books this will probably be a plus  but for me was not. It wasn’t so much that the characters had been more fleshed out in earlier books – I could tell easily that the previous series featured (mostly) Aidan and Jamie as the main POV characters and this one features FBI agent Cameron Byrne and Assistant US Attorney Dominic (Nic) Price. No, what was the most confusing was that the action/suspense story for the most part relied on prior knowledge of the earlier series. I gather that there was an unfinished suspense plot somewhere earlier and readers got the end of it here. At least, I hope that’s the case. Because if it was all brand new then it was a super weird way to start a story (ie, somewhere in the middle). We never got to go back to the beginning either. My impression was that the plot assumed knowledge I just didn’t have.

I thought about DNFing actually, wondering whether I was doing myself and the book a disservice by continuing but, having committed to a review, I decided to push on. And, I thought my opinion would be valuable to those considering whether to jump in from here or start at the beginning.

Also, there were things to like about the book. It has a strong sense of place – San Francisco and the camaraderie of the group was also enjoyable, even though I didn’t always understand the context or the various relationships. By about the halfway mark, I had settled enough into the story that I felt I had a handle on it but that first half was pretty hard going for me.

Imperial Stout is the first book in what I understand will be a trilogy featuring Cam and Nic. This one ends in a HFN and there is an overarching suspense plot involving Nic’s father which will be further explored in the next book in the series, out later this year. I enjoyed this book enough to be interested in the next one – but I think I need to carve out the time to read the earlier series first.

I gather that Cam and Nic have been dancing around their mutual attraction to one another for some time. Prior to the start of this book, they had shared precisely one hot kiss but they’d been building up to it for months. When Imperial Stout begins, Cam is leading an FBI team into an apartment where a group of thieves are about to attempt a robbery of some valuable Serbian artifacts. Nic is in the control van keeping eyes and ears on the communications feed. Then all goes south and the team have to scramble to save their own lives and not lose all of their suspects.  The book is certainly fast-paced and action-packed. It reads more like a suspense/thriller with a thread of romance rather than a romantic suspense.

There isn’t a lot of “courtship”. Clearly much of that happened earlier, in the earlier series. However, during the course of this book, Nic and Cam deepen their knowledge of one another – both emotionally and physically. Each man has traumas in his past which leave him vulnerable and those reveals begin to happen over the course of the story.

Cam is bisexual and I appreciated the representation. I also appreciated Nic as an older hero (he’s 45). To be honest, I’ve read a few romantic suspense books where a hero was a former Navy SEAL and a current lawyer/law enforcement officer and this is one of the few where the timeline works because Nic is actually old enough to have believably done all these things.  I also appreciated the HFN ending which was satisfying even while it was incomplete.

As someone unfamiliar with the universe in which this book is set, Imperial Stout was pretty hit and miss and it gets a C+. My recommendation to readers is not to read this one until they’ve read the Irish & Whiskey series.