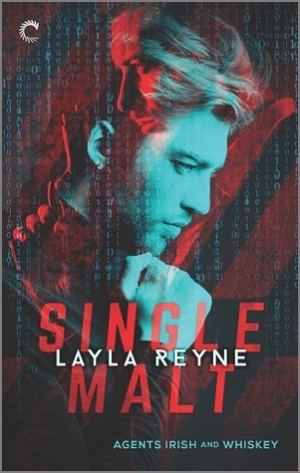 Eight months after the car crash that changed everything, FBI agent Aidan Talley is back at work. New department, new case and a new partner. Smart, athletic and handsome, Jameson Walker is twelve years his junior. Even if Aidan was ready to move on—and he’s not—Jamie is off-limits.

Jamie’s lusted after Aidan for three years, and the chance to work with San Francisco’s top agent directly is too good to pass up. Aidan is prickly—to put it mildly—but a growing cyber threat soon proves Jamie’s skills invaluable.

Jamie’s talents paint a target on his back, and Aidan is determined to protect him. But with hack after hack threatening a high-security biocontainment facility, time is running out to thwart a deadly terrorist attack. They’ll have to filter out distractions, on the case and in their partnership, to identify the real enemy, solve the case and save thousands of lives, including their own.

I started (and finished) reading this book after I took a glance at the monthly review query letter Carina Press sends to DA. Your book sounded very tempting – I like romances which feature law enforcement officers, especially if they also have action packed suspense storylines, and this book certainly has that. And I just really liked your writing. I bought it as soon as it was released and am looking forward to the next book in the series.

I want to be very clear – this book *was* action packed and suspenseful, but the romance storyline was also prominently featured. I should give readers more information than the blurb does. The crash that changed everything for Aidan was the one that killed his husband Gabe and his partner Tom, and Aidan was behind the wheel. Of course this left him grieving and blaming himself.  He was also in coma for two weeks. The book starts with Aidan back at work and his FBI boss Melissa Cruz (who was also Gabe’s sister) is trying to make sure that he is indeed ready.  She tells Aidan that she has received a package that makes her think what happened eight months ago was no accident. She thinks that because all the encrypted files on the flash drive that she received are dated the date of the accident. Aidan is a little bit relieved that his “conspiracy theories” may turn out to be true, but he is also a bit annoyed that his boss did not share this information with him earlier.

Mel tells him that she will allow him to investigate this off the books. In the meantime she gives him a new partner, James (Jamie) Walker, who is in the cyber crimes division; she wants Aidan to mentor Jamie and see if he is ready to be promoted to a full-time field agent position.

After some initial apprehension I thought Aidan did a nice job assessing Jamie’s talents and I thought that they clicked pretty well together.  The main case they were assigned — “a series of hacks at Galveston National Laboratory – was right in Jamie’s wheelhouse and he could not have been happier. The SAC down there, Gary Clark was a friend of Cruz’s and he called in a favor, requesting reinforcements for their overworked cyber teams”.

Of course the case grew into something significantly more complex than our heroes expected and I loved every second of the investigation. It was fun and I was very entertained. There was a lot of computer security language thrown in there, but it did not stop me from enjoying the story, quite the contrary. I have no knowledge whatsoever to assess whether the author did solid research, knows computers well herself, or just made it sound cool. I stress this point because I have read books and seen movies where the computer stuff seemed plausible to me, but then the computer person in my family rolled his eyes multiple times and told me that no, it was all implausible bullshit. So anyway, computer security folks, I don’t know whether to tell you to brace yourself for the worst or not.

What I do know is, as I said above, I really enjoyed the ride; I enjoyed the multiple interviews they did and I enjoyed the action.  I pinned the bad guy but not from the very beginning – it is just that a certain thing he said became a dead giveaway for me.

I thought the romance storyline was very cleverly done. Aidan is still grieving for his husband, but he most definitely notices Jamie and is attracted to him. While there is no right or wrong time to get involved with somebody after such a devastating loss, I was worried that at the end of the story Aidan and Jamie would declare their undying love for each other. Not because they were bad together, but because it seemed that Aidan might have been ready for something casual, he wasn’t ready for something permanent yet. His grief still felt too raw to me. I was glad that they decided to keep it casual and fun for now.

I am looking forward to the next book, but last few pages made me feel worried – not because they will continue investigating the accident which was not an accident, I am guessing this would be an overarching action storyline for the series, but because it sets up the potential for idiotic miscommunication between the guys and that would go where I really don’t want it to.