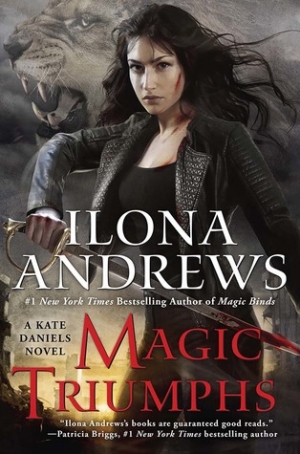 When I finished reading Magic Triumphs last night I felt at a loss for words. I’m not sure I have them now. I’m still flailing a little. I ended the book a little shell-shocked. It was almost non-stop action from start to finish and the stakes were the highest they’ve ever been. Even though I knew you’d promised a HEA for Kate and Curran and I trust you, you were still able to shake me up as I was reading.

Probably since about book 4 I’ve been wondering how you were going to resolve the Roland threat. I wondered a little if you’d maybe painted yourself into a bit of a corner. Silly me. I ought to have had more faith. How it was done was clever and fitting and it made sense in the book and in the wider context of the series. I couldn’t ask for more than that. Brava.

I expect Magic Triumphs will be a book which improves on a re-read. One day when I can carve out the time, I’d like to read/listen to the entire series from start to finish one after another so that I can experience the arc without time and other books getting in the way of my memory. I think I will likely enjoy this book even more then. There are no doubt callbacks to things in earlier books which I missed altogether.

On the other hand, because the worldbuilding is so dense, I occasionally got just a little lost because I couldn’t remember all the things from the previous books. Part of me was tempted to go back and search things in previous books but in the end I just decided not to interrupt myself and keep reading. But I am planning that series re-read/listen.

I’m glad I had already read Iron & Magic (apart from anything else I loved it) because there are pivotal things which happen in that book which impact the story in this one. And there were questions I had after reading Iron & Magic, some of which were answered here. There’s a little snippet from Elara which was a happy surprise and I’m hoping there’s more context to it in the next Iron Covenant book.

The conversation Kate has with Christopher about Hugh was particularly instructive for me. It made it easier for me to buy into Hugh’s redemption – I had already gone with it, but I felt more comfortable with my decision. On the other hand, I am sticking my fingers in my ears and singing “la la la” about Christopher’s history. There are interesting philosophical questions there but I’m unqualified to tease them out or make an attempt at answering them.

I was happy to see Kate and Curran so loved up even as I wondered at their stamina. I was exhausted and I was just reading about all the fights and battles. While they have frequent sex in the book there is only one detailed intimate scene and it is nicely done, a little less explicit than in Magic Shifts, which I liked.

You captured the fierce maternal protectiveness Kate feels for Conlan and the way that, and her love for Curran are the things which drive her on. Her friends are important too and there are some tense moments when they are also under threat.

Kate’s abilities in one-on-one fights as well as larger engagements are showcased and there is also that trademark humour which lightens the tension in places.

I admit I still don’t 100% understand Kate’s complicated feelings for Roland. Not so much that she can love him and hate him at the same time – but that she can, occasionally, like him and enjoy his company. In previous books, seeing Roland and Kate sniping at each other lulled me into the idea that he wasn’t that dangerous. Perhaps that was deliberate.

This is the 10th and final book in the Kate Daniels series. While Kate and Curran may turn up for cameos in future books (I hope!), this is their story done. I’m sad to see them go but also happy for them to enjoy their HEA without constant threat. Well, I imagine they’ll still be killing monsters on the regular because that’s who they are, but basically, they’re okay. The good news is that there is plenty of room in this world for other stories and there are many other characters I’d happily read about – including some, I’m  sure, I haven’t met yet. In no particular order, I’m here for more of Julie, Derek, Jim and Dali, Conlan, Raphael and Andrea, Ascanio, Christopher and Barabas, Desandra, and Elara and Hugh.

There were one or two characters I lost track of at the end of the book. I don’t know if they made it or not. My fingers are crossed for at least one of them.

Magic Triumphs was a fitting end to a much-loved series and gave me just about everything I could have hoped for. Grade: A-