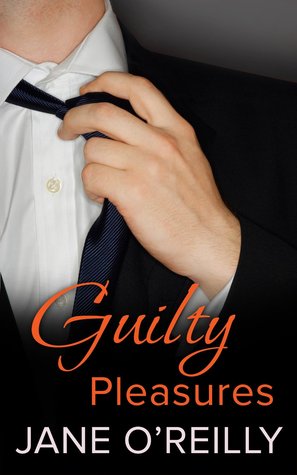 I recently reviewed The Pleasure Principle here.  It turns out, I read the novellas in the wrong order and I should have read this one first.  Oops.  (The novellas are only fairly loosely connected however, so it’s not like there were any massive spoilers or anything.  But I think it helps to know that Guilty Pleasures comes first – pardon the pun.)

Tasha and Ethan both work at Thomson Associates as architects.  As the lone female architect she feels she has to work twice as hard to receive half the credit and recognition as her male colleagues.  Since Ethan joined the firm some months ago she has been involved in a silent competition with him (it is not clear he even knows about it) to start earlier, work through lunch and stay later.  Tasha sees Ethan as buttoned-up and robotic.  He thinks before he speaks/acts and he doesn’t talk much.

Most recently, Tasha has discovered the surprising and stress-relieving power of masturbating in the office (door open) after everyone has gone home and before the cleaners arrive. Part of the thril is the risk of getting caught.  On this particular day, she does get caught – she looks up and sees Ethan in the doorway.  He leaves and she spends the rest of the night stressing about what he might do, what it might mean for her career and what she should say to him (as one would).  However,  Tasha soon discovers that Ethan has a similar kink and soon they are having risky semi-public sex all over the place.  Eventually, they take it to his apartment but even then there is a window involved.

There was a (too brief) conversation about sexual health and birth control but condoms weren’t used for vaginal penetration (alas).  The upside was a very dirty scene indeed (which I’m sure was the point) but that kind of recklessness didn’t convince me that Ethan or Tasha had good judgement.

In the end, it was probably a good thing for me that I read the novellas out of order because I enjoyed The Pleasure Principle better.  Both books are a lot of fun and full of hot, inventive sex but Guilty Pleasures had less romance.  If I were rating it as erotica, I’d probably give it a B but I’m a romance reader and I primarily read for the relationship.  I’m happy to read about the sexual journey to a happy ever after but I do want there to be a relationship which develops over the course of the story.  There was a relationship in Guilty Pleasures and even a HEA – it’s just that the focus was very much on the sex and not much on the “getting to know you” part.  There was a mention of a lovely weekend spent together talking about everything (as well as having a lot of dirty sex) but those conversations were not detailed.  I didn’t get the impression that I knew any of the characters terribly well by the end of the book and, when Ethan drops a bit of a history bomb on Tasha, I wasn’t prepared for it.  (Perhaps it is just my naturally cautious personality but even with all his hotness and sexual expertise, I’d have been seriously backing away at that point.  I wondered why she didn’t.)

The sex was great – although (and I admit I’m not an expert here) I thought some of the more adventurous activities would take a bit more… preparation.  (*cough* When Ethan said he wanted to “fuck [Tasha] with [his] hand” he wasn’t kidding. *cough*)

I needed more pages focused on their relationship so I could have confidence in the HEA. I wanted to see them exercising good judgement so I could approve their decisions instead of worrying they were leaping before they looked. (What a judgemental reader I am!)  As it was, I could definitely see their sexual connection but I wasn’t convinced they really knew each other.  In The Pleasure Principle, my impression was that Verity and Cal had been working together for a while and were friendly, and over the course of the book, I felt they got to know one another much better (and not only in sexual ways).  The dialogue in the story convinced me that Cal understood Verity.  I can’t say the same for Ethan here with Tasha.  I believed he wanted to know her, but that’s not quite the same thing.