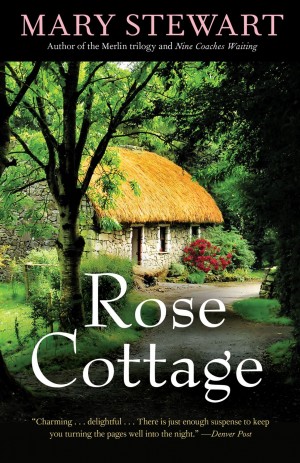 Rose Cottage, a tiny thatched dwelling in an idyllic English country setting, would appear the picture of tranquility to any passerby. But when Kate Herrick returns to her childhood home to retrieve some family papers in the summer of 1947, she uncovers a web of intrigue as tangled as the rambling roses in its garden. The papers are missing. The village is alive with gossip. Did her elderly neighbors, suspected of being witches, really see nighttime prowlers and ghosts in the cottage garden?

Kate’s search for the truth brings her together with many childhood friends and neighbors, some suspicious of her return, but most eager to help. It also leads her down a trail of family bitterness, jealousy, and revenge–and into an exploration of her own past. She ends up discovering a long-hidden secret that will change her life dramatically–along with romance in a place she least expects.

Though I’ve owned a hardback copy of “Rose Cottage” almost since it was released, I’d never pulled it out and read it. I think part of me was afraid to. What if (horrors!) I didn’t like it. What an awful way to finish the last Mary Stewart book. Finally I gathered my courage and dug it out. It wasn’t quite what I was expecting but it’s not half bad.

Unlike most of the other “modern” Stewart novels, this isn’t a “gothic heroine in danger” plot. There is a mystery to be solved but it’s one about the heroine herself rather than an external and exotic one. Kate has always had a mystery in her past – that of who her father was. Her young and pretty mother refused to reveal who fathered her illegitimate child. When Kate was six, tensions in the small cottage came to a boiling point, fanned by her gran’s sanctimonious sister. Her mother fled, leaving Kate, and died in a bus crash shortly afterwards taking her secrets with her.

Now Kate has a simple task to perform – go to her childhood home and get some family papers from a hidden hidey-hole and pack her gran’s remaining possessions. What should have been a quick few days work turns out to be anything but as mystery piles on mystery and perhaps old secrets will finally be revealed.

This book is also different from what I’m used to from a Stewart book in that it’s not in an exotic and foreign land. Instead its locale is mainly northern England which Stewart would have known well. The time frame is fairly close to the end of the war perhaps not too far from “Madam, Will You Talk?”.

Events in the book are set close enough to WWII that old retainer loyalty and sense of what is proper in relations to the Quality would still be in force. Kate and her relations and friends aren’t quite knuckling their foreheads but it’s not too far off. There is also still rationing and coupon books and worries about having enough extra food for guests.

I had to laugh at the fact that Kate is another of Stewart’s former teacher heroines. She sure seemed to have it in for the teaching profession in that her heroines escaped from it whenever they could. Kate is also another war widow.

Once I stopped looking for a body or someone to be trying to kill anybody, I settled into what the book is about – namely discovery of self and a warm hearted trip back to childhood. Through Kate’s eyes, we learn all about this small village and the families who’ve lived there for generations as well as the newcomers who don’t quite know all the secrets.

Solving the mystery requires that Kate seek out, and be sought out, by a variety of people who each have a little piece of the puzzle that confronts her. But it’s not until a fortuitous discovery late in the story that Kate can put everything together and find out who she really is.

The final scene turns into something of a “pile-on” in terms of everyone showing up though I was delighted that one of these turns out to be a kitten. But while Kate gets the answers she’s always longed for, I felt slightly cheated in the romance department. While Stewart’s books aren’t romances per se, they usually have a stronger presence than is here. Yes, Kate appears to be able to look forward to a HEA but we’re not going to see much of either the slow simmering courtship or the payoff.

“Rose Cottage” is more women’s fiction than anything else. It’s nice women’s fic but get your expectations set for this before starting it. It also left me with a profound truth that I wouldn’t have appreciated had I read the book when it was published and I was younger. “Why was it that one always regretted change? Things were not made to stay fixed, preserved in amber. Perhaps the only acceptable amber was memory.” Was this the view of Mary Stewart herself looking back on her life at the point when she wrote the book? I agree with several reviews I’ve read of it that use the adjectives “gentle” and “sweet” as well as nostalgic. By the end of the book, I almost feel as if I’ve come home to this peaceful village with its lovely English gardens, cups of tea that will cure any ill, and neighbors who might annoy at times but who usually have your best interests at heart. B-