REVIEW: Beyond Jealousy by Kit Rocha 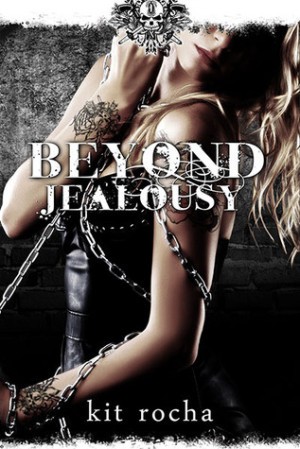 There are so many things I really love about this series and it’s not primarily the sexual interaction. The series is set in a post apocalyptic environment focusing on the city Eden and outlying sectors.

Inside the city, people are taught that woman are chattels and sex is something to be endured. The sectors are like the Wild West with each region ruled by different gangs who impose their own rules. What kind of life you live depends largely upon the leader of your sector.

In Sector Four, Dallas O’Kane rules. He’s not a kind and benevolent leader but his sector offers four things: access to premium O’Kane liquor, sex shows, fight matches, and the freedom to live as you wish.

Beyond Jealousy is the story of Cruz, Rachel, and Ace.  Rachel and Ace have been dancing around each other for years but for some reason that remains a mystery to me, Ace pushed Rachel away.  Beyond Jealousy is one of those books that I think would be difficult to read on its own and even though I’ve read the previous books in the series, I’m still befuddled as to the actual emotional conflict.

Because Ace believes he cannot commit to Rachel, he hurts her and along comes Cruz. Cruz was a former military leader in Eden but defected to join Sector Four as an enforcer.  In previous books, Rachel and Cruz had a thing until Cruz and Ace got together.

The external plot is that someone is making subpar liquor and selling it under the O’Kane label. Rachel’s family in Eden is caught in the middle. O’Kane and his crew will have to ferret out the true enemy and Cruz struggles with his fear of either Rachel or Ace being wounded.

The world is so interesting and I read this series because I want to know what is going to happen to these people. What is the end game? How will they all survive? As Dallas O’Kane grows in power, what kind of person will he be?

That’s not to say that the eroticism isn’t a strong part of the series. It is and in this book one of the more powerful scenes is the angry love / sex between Cruz and Ace. They fight and then make up in a way that a woman and man could not.

But while I love the world and care about the people, the lack of a believable emotional conflict with Ace was frustrating. I also don’t understand why everyone in Sector Four has an exhibitionist kink. It doesn’t ring true for me and sometimes it makes me feel like the women are often performing for the male gaze. I don’t think I remember a scene where two guys are going at it for the entertainment of Sector Four. The guys fight in the right. The girls fuck. Even though this is a world about female empowerment, this part of the story sometimes bothers me.

It’s still an evocative series and it treats women and sex in a very positive way. There’s no shame in enjoying your body or someone else’s body in any number of ways and we need books like that in our genre. C+