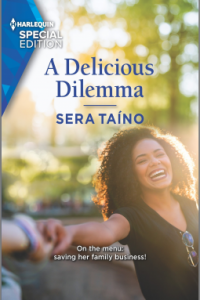 Val Navarro’s first mistake: going out dancing after a bad breakup when the chef should be focused on her family business. Her second mistake? Thinking the handsome, sensitive stranger she meets could be more than a rebound – until she discovers he’s Philip Wagner of Wagner Developments. His father’s company could shut down her Puerto Rican restaurant and unravel her tight-knit neighborhood. When Philip takes over negotiations, Val wants to believe he has good intentions. But is following her heart a recipe for disaster?

I was interested in reading “A Delicious Dilemma” because of the Puerto Rican representation and food as well as the fact that the book would also tackle the issue of gentrification. Plus it’s got a lovely cover and I’m weak like that.

Val’s family have owned and worked in the family restaurant since her Puerto Rican immigrant parents started it years ago. Philip has worked in the family property business that his grandfather started after he brought over his entire family from Slovakia. Both Val and Philip are hard working, honest, and after meeting at a local night club, interested in each other. Philip quickly realizes that the building that houses the Navarro restaurant is one of the properties that Wagner Developments is interested in acquiring so he doesn’t tell Val who he is the first night that they meet. But he’s honorable enough to avoid taking their relationship much deeper until their next date when he tells her who he is. Wow, one Big Misunderstanding avoided.

Val is understandably not happy but when Philip is the one willing to meet with her community group to address their concerns about the development of their neighborhood and potential eviction of tenants, she’ll work with him. There are surprisingly few speed bumps on the road to them coming up with some compromises that will see both sides getting much of what they want. Plus as the two of them meet and go out on dates, Philip is considerate and careful of Val’s pride due to the difference in their styles of living (once Philip’s Haitian immigrant friend Etienne reminds Philip of his privilege). Val’s family mainly approves of Philip though true to their close knit nature they endlessly tease Val about him.
So all those conflicts are fairly easily smoothed out with only an occasional reference to Val still being aware of how Philip “lied” to her about who he was.

Things were slowly floating along towards the conclusion. Philip’s family isn’t the horror I thought it would be turned into. Instead his mother is delightful and welcoming while his father is focused on business but ultimately willing to listen to the community proposals as they make good business sense. Val’s family are supportive of each other and her even if her younger sister and brother turn up the teasing once Val and Philip do the “next morning walk of shame” after they finally! make their relationship physical. And I’m thinking that by avoiding the misunderstandings and conflict this book is turning out to be fairly … bland.

Turns out I actually need a little friction in a story after all. With only about 40 pages left to go, I’m mentally humming Peggy Lee’s song “Is That All There Is?” Hmmm, I hummed too soon as suddenly a book’s worth of conflict and angst got dumped in the narrative. Things that I thought had been settled became unsettled in unsettling ways that flipped characterizations on their heads. This person did this and that person did that and it all seemed too scripted rather than real. So I got the conflict I found I wanted but in a forced way that all of a sudden gets resolved too easily. The “year later” epilogue helps me be sure that the romance really will stick in the long run – something very much in doubt earlier on – but what had been a solid B book slipped down due to the uneven resolution that I hope is only due to this being a debut book. C+