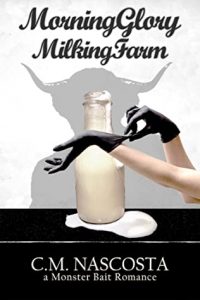 I saw the buzz about this book on Twitter and I bought it because apparently I’m a sheep. (Ha. Geddit? There are sheep people populating this world but they are not major players in the story.) It’s not the kind of book I would usually pick up – it’s definitely one which was purely as a result of multiple *multiple* Twitter recs. For now at least, it seems to be only available from Amazon.

It’s a longish novella – around category length really and the cover really does give much of the game away. Violet, is a human who needs a better-paying job. She clicks on an ad for the Morning Glory Milking Farm in Cambric Creek and before she knows it, she’s “milking” minotaurs for a living.

On Violet’s first day she has an experience with a particular minotaur which she finds arousing. Apart from him however, she doesn’t get turned on by her job. It’s not a sex service (although there are some creeper minotaurs who try and make it so – every species has them apparently). The mythology has it that the minotaur semen – alarmingly copious amounts of which are produced by the clients at the farm – is the magic ingredient in the “little blue pills” for human erectile dysfunction.

There is a mutual connection between Violet’s favourite minotaur (whose name turns out to be Rourke) and herself and he makes a special request for her to be the technician he sees for his appointments.

I wrote in a review recently that I found a marriage of convenience plot a little unbelievable but that I’d definitely gone with stranger things before so I gave it a pass. This is exactly the kind of book I was referencing in that review.

It’s more than minotaur sex however. There is worldbuilding and consent and relationship building. There’s not-shaming other female characters!! There’s no evil ex! Rourke is divorced and when Violet cyberstalks her to get the down-low she doesn’t judge her. Honestly, this is delightful.

Violet had gone to bed that night wondering what had happened; if this other woman had decided to become someone new before their marriage had ended, if they’d each become someone new, and the people they’d become after their vows simply hadn’t worked together. Violet found that she couldn’t think badly of the woman in the photos, for she herself seemed completely different compared to the person she’d been only six months earlier; before she’d known about minotaur milking farms and vampire restaurants, when she’d been ignorant to the way her neighbors of different species lived and had been blind to her human privilege. She’d not be able to go back, that was certain, no matter how much her mother and Carson Tinsely from up the street might have wished it, so she could not fault this other woman for reinventing her life in a way that made her happy, and she clearly seemed happy in the multitude of photos.

Rourke is significantly better off financially than Violet. There’s open discussion about their economic disparity and Rourke does not use it as a way to control her.

“Violet.” If the commanding rumble of his voice hadn’t silenced her, the heat of his hand dropping to her knee would have. “I don’t want you to feel that you don’t have any agency here. I might be the one giving all the orders, but you hold all the cards. Your comfort is the only thing that counts right now, and if I overstep, I want you to know you can tell me so. But that’s not happening. Don’t think I’m unaware we’re at different points in our careers. You can say no, you can say you don’t want to see me again, you can tell me to stop coming to the farm when you’re working. It’s dinner, not a down payment on your time. But I’m in a position to comfortably spoil someone, so when you’re with me, I’m spoiling you. End of story.”

Of course, he needs to be a bit bossy about it but the underlying respect is what’s important. As wild as the premise is, there’s a hook that isn’t just the sex.

I had to laugh at Violet’s response though:

She was a good feminist, she’d told herself, and she definitely couldn’t be bought . . . but if he’d have suggested at that moment that he would have appreciated a blow job, she would have fallen face-first on his cock with an open mouth without a shred of hesitation.

Rourke is aware of boundaries and potential conflicts for Violet within her job and he seeks to build a relationship with her outside of sex before things become physical between them – this includes pausing his visits to the farm for a while so as not to confuse things. The way the story treated these kinds of issues made it much more than an erotic romance. I liked the inclusivity of Cambric Creek and the way Violet examines her previously held prejudices and privilege as she learns about the community. I liked the friendships she built outside of her romance with Rourke and a I liked the way that Rourke never sought to control Violet or make any demands about her ceasing work at the farm if she didn’t want to.

There’s also some commentary about people (well, in this case, minotaurs) being commodified which added to the mix. There really is a lot more to the book than minotaur sex.

In fact, that was the not-sex I enjoyed the most. I tried to work out why the sex squicked me out a bit (because it really did). I’ve read plenty of paranormal and some alien romances and loved them. I enjoyed Strange Love by Ann Aguirre which had an insectoid alien/human romantic pairing and some of the Ice Planet Barbarian books to name a few. But as it turned out, minotaurs were just that little bit over the line for me. Not enough for me to stop reading but enough to make me uncomfortable at times. In the end, I decided that for me (and this is very much a personal take so no judgement here) minotaurs were just a little too close to well… cows. If I imagined the minotaur as more human it was okay but when I was confronted by the reality of his cow-ness, the sex scenes were less successful for me. I mean, I still read it and overall, I enjoyed the book – it’s just that I had to metaphorically read it peeking through my hands and there may have been some cringing involved here and there. For instance, here:

His cock slipped from her like a particularly corpulent eel, swinging loose with a gush that sent a ripple up her back, splashing to the shower floor like an overturned bucket.

For readers who didn’t have the “cow disconnect” I did and can regard a minotaur as I manage to regard an alien (and honestly, I think that’s probably a lot of people if my Twitter feed is any indication) the sex is hot, albeit eye-watering, Morning Glory Milking Farm is a rollicking good time. Come for the minotaur milking, stay for the story?