Recently I finished Pretty Pretty Boys, the first novel in your Hazard and Somerset series. While it wasn’t a keeper for me, the slow, slow burn relationship between the main characters and their explosive chemistry sucked me in, and I knew when I finished that though that book had a number of issues, I was about to fall into a rabbit hole and inhale the entire series. 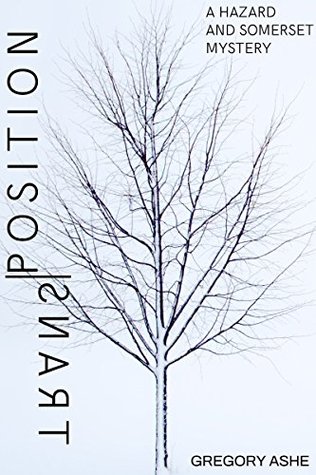 For readers who have not read the series but are interested in it, please start with my review of Pretty Pretty Boys. This review will contain spoilers for that book. And before you look at my grades for this one and its prequel and decide that this series isn’t worth reading, keep in mind that I’m obsessed with the romance in this series and have liked books three though five. I’ll be reading more in the future because this series is like a bag of Lays potato chips—no one can consume just one.

Transposition takes place about a month after Pretty Pretty Boys. Emery Hazard and John-Henry Somerset have a strong working relationship by this point and against all odds (their long-standing enmity went all the way back to high school) like each other. Their attraction has also been acknowledged by both of them, but each is in another relationship. Somers is trying to reunite with Cora, his estranged wife, and Hazard has recently started dating Nico, a gorgeous graduate student / model who is nine years younger than him.

Hazard and Somers also share an apartment, something that isn’t good for their relationships with Cora and Nico. Somers, who is the joking kind, likes to tease Hazard about his own (Somers’s) attractiveness and calls Nico a baby. Hazard doesn’t reciprocate (it’s not in his style) but he does grit his teeth and occasionally gives his partner the finger.

The book begins on Thanksgiving Day. John-Henry and Emery are both in the office because Somers has volunteered them to work that day. Hazard grouses about it. Nico is making him an amazing Thanksgiving dinner so when a call comes in five minutes before the end of the workday and Somers answers, he’s even more pissed.

Batsy Ferrell, an elderly woman who lives on the outskirts of town, claims she was shot at, so Hazard and Somers drive through a blizzard to get to her house. She lives near a gun range, though, so it seems like a stray shot; worrying, but not an attempt on her life. Emery and John-Henry say that they’ll speak to the culprits. They get back on the highway and then drive across a rickety bridge to reach the Windsor estate, where the gun range is located.

No one is outside the property, it’s too cold for that, but a blood-curdling scream from the big house puts Hazard and Somers on high alert. It turns out to be nothing serious, though. Windsor is currently occupied by several employees of Strong, Matley and Gross, a small investment firm. The staff members are on a company retreat and playacting a murder. The cops’ arrival has disrupted the game. Once they ascertain that there is no danger and alert the group to the shooting issue, Somers and Hazard try to make their way home.

On the way there, though, the rickety bridge that leads to the highway is flooded and they have to abandon the car. Luckily, they are on the safe side when the bridge breaks and the car slides into the icy water. Unluckily, when they call one of their co-workers, they learn that the only back road is useless. Chief Cravens, their boss, tells them to shelter at Windsor. In a few days, after the blizzard dies down, they’ll be helicoptered out.

Hazard is angrier than ever about missing Thanksgiving with Nico. There’s just one empty bedroom at Windsor, with only one bed. Emery and John-Henry will have to share it. They resign themselves to that, as well as to boredom, cold, and the company of the investment firm’s employees, several strangers most of whom are unpleasant. Soon, though, their boredom disappears because a real murder takes place.

The victim is Thomas Strong, the reclusive owner of Strong, Matley and Gross. All his employees—several people—are under suspicion. It appears, too, that someone else is near the house and that this unknown person might also be the killer. Hazard and Somers have to dig into the crime and work out who the killer is with the knowledge that the murderer is too close for comfort. They also have to figure out how to sleep in the same bed without killing each other—or giving in to their potent attraction.

This book was not as successful for me as Pretty Pretty Boys. Part of the problem was that this was essentially a locked room mystery and locked room is my least favorite mystery trope. In many locked room mysteries keeping the sleuth(s) and suspects in the same location is contrived, but here it mostly worked because they were all snowed in.

The limited settings can give locked room mysteries a certain sameness, but here that wasn’t as bad as it could have been. There were a few other buildings on the grounds that the characters explored and some scenes took place at the gun range, near a river and elsewhere on the grounds.

I have other reasons for disliking the locked room trope, though, too. It’s claustrophobic and when the bodies start piling up despite the sleuth(s) presence, it starts to seem like the investigator(s) is / are incompetent. I had these issues here.

As with the first book, there were a couple of things that didn’t make sense here. One example is this:

The killer’s plan to hire another person to assist with the crime doesn’t add up. How could the killer know this person would agree? This person could have gone to the authorities instead.

Another example is the non-communication. I’m not against non-communication on principle. I like it when it makes sense, and in fact this series is pretty much built around it. Most of the time it works well in these books because it’s in the characters’ nature and in the nature of their fraught relationship. But in Transposition Somers stewed so much over one thing without communicating. I got frustrated when Hazard didn’t just ask him what the problem was. And there was some (though less) of that in the reverse direction, too.

On the other hand, the subtext around the romantic aspects of Somers and Hazard’s relationship was handled well. There’s no acknowledgement of why Hazard had moved in with Somers or why Somers keeps making wisecracks about Hazard and Nico, but we don’t need these. It’s obvious that the attraction is behind all of that. Likewise, Nico’s resentment of Somers also makes sense though the reasons for it aren’t fully disclosed.

IMO Somers feels a need, perhaps subconscious, to stay on Hazard’s mind and this is why he makes so many wisecracks about Hazard and Nico. He wants to get under Hazard’s skin because Hazard is under his own. Hazard keeps his cards close to his vest where his feelings are concerned and Somers isn’t sure what Hazard feels for him.

I love the author’s ability to get all of this across without ever making it explicit. I had an issue with Somers on that score, though. I get that he and Hazard are flawed but Somers’s intrusiveness felt a little adolescent and that aspect of it is annoying. It does add a lot to the sexual and romantic tension, though.

There was also a kiss in the snow where Hazard told Somers to choose between him and Cora—and that was hot. There were some other hot moments in this book, too.

To a degree, I felt this way because I’m used to I’m used to a greater passage of time between books in a series. I had to remind myself that only a few weeks had passed since the events of the previous book and that the protagonists didn’t know each other (as adults) that well. When I remembered that, the book worked much better and the pace of the romance felt right.

Other irritants were the convoluted nature of the mystery and the unpleasantness of the secondary characters. Almost all the employees of Strong, Matley and Gross were unlikable and that’s being kind. It was hard to care whether they lived or died, except in regard to how that affected the mystery and Hazard and Somers’s ability to solve it.

I did love that:

Somers got to solve most of the mystery near the end and to save the day in this book. It gave more balance to the relationship, showed a caring side of Somers (he noticed Emery’s fever and found him a safer place to rest) and also allowed us to see the mystery solved with people awareness skills (Somers’s greatest asset as a detective) rather than through analysis (Hazard’s method).

There was some nice description, dialogue and internal monologue. If I remember correctly, the head-hopping issue that was present in the first book wasn’t present here, so points for that. This series is addictive and I’ve now read five books and three short stories. But out of all of them, this book is the weakest and most frustrating. C-.