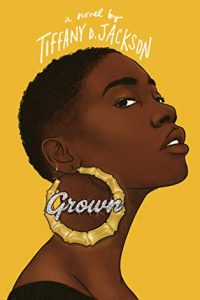 A couple of months ago I read and reviewed your YA novel, Monday’s Not Coming, and was impressed. The book had a powerful mystery at its center, a disappearance of a teenager noticed only by her best friend. Even before I read it, I had heard great things about your writing so it was an easy decision to request your newest book, Grown, based on the following blurb:

When Enchanted Jones wakes with blood on her hands and zero memory of the previous night, no one—the police and Korey’s fans included—has more questions than she does. All she really knows is that this isn’t how things are supposed to be. Korey was Enchanted’s ticket to stardom.

Before there was a dead body, Enchanted was an aspiring singer, struggling with her tight knit family’s recent move to the suburbs while trying to find her place as the lone Black girl in high school. But then legendary R&B artist Korey Fields spots her at an audition. And suddenly her dream of being a professional singer takes flight.

Enchanted is dazzled by Korey’s luxurious life but soon her dream turns into a nightmare. Behind Korey’s charm and star power hides a dark side, one that wants to control her every move, with rage and consequences. Except now he’s dead and the police are at the door. Who killed Korey Fields?

All signs point to Enchanted.

This premise, while not as fresh as the one Monday’s Not Coming had, seemed like it had potential. But had I known what the relationship between Enchanted and Korey was like—that theirs was an R. Kelly type of situation—I might not have requested the ARC. I know several people who have been sexually abused as children so this is a potential trigger for me. Still, I was able to get through the book.

In the first chapter of Grown, subtitled “Now,” Enchanted Jones wakes up near a bloody knife. Music superstar Korey Fields lies dead nearby and Enchanted has no memories of the night before or who killed him. Drugged and groggy, she thinks of the blood as beet juice because that’s easier to face. And that’s before the police start banging on the door.

In the next chapter, we flash back to “Then,” an earlier timeline that begins before Korey comes into her life. Seventeen-year-old Enchanted has a pretty good life before she meets the celebrated singer. She has supportive and loving parents, a great best friend in Gab (Gabriella) Garcia and a lot of fun swimming and watching animated Disney movies with her younger siblings.

But Enchanted has an unfulfilled ambition, a dream her parents don’t nurture. She wants to be a successful and famous singer. She thinks she has the pipes for it and when Gab suggests that she attend an audition in nearby New York, Enchanted barely thinks twice. She doesn’t win the competition but she does attract the attention of the famous twenty-eight-year-old musician Korey Fields.

Korey expresses enthusiasm for her talent. They start texting each other videos of famous songs that communicate the feelings they want to express. Enchanted tells Korey all about her life and when she’s in New York for a meeting of Will and Willow, a social club for Black high school students, Korey engineers a meeting with her. Their texts become more personal and passionate; soon, Korey shows up unexpectedly at Enchanted’s school and performs with her there.

Korey offers to mentor Enchanted in his studio, release an EP of her music and build up her career. Enchanted’s parents are wary at first but when Korey promises that Enchanted will be safe with him and that his assistant Jessica will supervise, they agree to let her record with him and join him on his tour.

But Korey’s motives are neither benevolent nor supportive. At the studio he touches Enchanted (purportedly to help her learn to breathe from her belly) and slowly he encroaches on her more and more. He calls her his “bright eyes” and tells her how much she means to him. The starstruck Enchanted believes she’s in love. She ignores Gab’s warnings that Korey is too old for her. It doesn’t take that long for him to show his ugly side.

Will Enchanted be able to escape Korey’s spell? What about escaping his presence before she loses her sense of self? And is she the one who killed him, or was it somebody else?

There’s a letter to the reader as the front of the book that explains that Grown is #ownvoices in more than one way. The author is not only Black, like Enchanted, but like Enchanted, she was also sexually abused by while she was in her teens. The letter also states speaks about the abuse of power inherent in child rape and the way girls are disbelieved and faulted for grown men’s crimes. This is an important message and the author brings authenticity to this story.

Nevertheless, my reading experience of Grown was marred by weaknesses. Enchanted’s portrayal is a bit uneven. We’re told that she’s mature for her age but her naïve, trusting personality gives a different impression. There’s a sweetness to Enchanted and I had sympathy for her and her situation. There was a point where her naivete and trust became hard to buy into.

Korey tells Enchanted that her parents have only been using her and want her back for what they can get out of her and she buys it. It doesn’t seem like the kind of lie that a daughter of loving and supportive parents would ever believe. She has known them for seventeen years prior to this.

Child abusers can be magnetic and it’s not easy to escape their abuse and their influence. The book depicts that very well. But because of that very fact, the first two-thirds of the novel felt slow paced. The chapters are short and that helps but in fiction reader engagement depends partly on the protagonist taking action to remedy their situation. Enchanted doesn’t do that for a long time because of the brainwashing Korey subjects her to. And by the time she does it she has been abused long enough that most of her attempts can only be feeble. That is realistic. But because fiction is more absorbing when the main character is driven to take action, it was also frustrating.

Korey is a disturbing, creepy villain, as he should be. The novel does a great job of showing how child rapists operate. Korey first gets Enchanted’s attention, then begins to tempt her using what he knows about her, then herds her into his sphere of influence, then grooms her and isolates her. By trespassing on her boundaries a little at a time, Korey gets away with a lot. By the time he shows his true colors, it is hard for Enchanted to get free of him. He uses his power to cover up his actions and when Enchanted starts to sense that something is wrong, he dangles the fulfillment of her singing dream in front of her to keep her with him.

The book’s central POV is Enchanted’s first person narration. The reader can see she is confused and is being conned long before she does. Besides her POV sections, we also get sections of police interview transcripts and minutes from the meetings of Enchanted’s Will and Willow chapter (made up of five or six Black teens from upper middle-class families in Enchanted’s home of Westchester, NY). The latter hit on issues like the way people don’t pay attention when bad things befall Black girls and the way girls aren’t believed. While laudable, these comments feel shoehorned. I would have liked to see these themes developed more.

The book moves back and forth in time. In the last third or so things start to feel messy and confusing, like the author doesn’t have control of the narrative.

Even after finishing, I’m not sure who killed Korey. I think I know, but another possibility is also hinted at. That was dissatisfying, and so was Enchanted’s situation at the end of the book. After all she had been though I wanted better for her.

As with Monday’s Not Coming, there’s a twist near the end of the book and it reads as gimmicky. I felt that it took away more than it added to the story. It didn’t mesh well with everything else, and I had another problem with it, too.

Enchanted is perfectly sane, no, wait, she’s experiencing delusions, wait, no, she’s sane, no, wait she’s delusional. The book flip-flopped on this point too much.

The book’s blurb and the way its first chapter began made me think the thriller aspect might get more page space than it did. I think the book had too much to lift—the abuse storyline, the murder storyline, and the social commentary. These aspects weren’t well-balanced. There probably wasn’t enough room to do all of that justice.

There are some nice touches, like a swimming theme—Enchanted loves to swim and feels out of water when she is on land for too long—and metaphors based on Disney movies. These things give Enchanted a bit more dimension and the book texture. They give the dual timeline more coherence. We are reminded of the well-adjusted, lively girl Enchanted used to be even as she becomes an abused girl in torpor.

On the whole, though, this book didn’t work nearly as well as Monday’s Not Coming for me. C- / C for Grown.

→ Janine
Previous article: REVIEW: The Woman Who Built a Bridge by CK Crigger
Next Post: Open Thread for Readers for October 2020