“Charlotte, the determined heroine of beloved author D.E. Stevenson’s The Young Clementina, has her future all planned out. But when Garth, the man Charlotte loves, marries her sister instead, Charlotte is heartbroken and moves to London to escape her pain. After the two divorce, Garth’s tragic death forces Charlotte to care for her young niece, Clementina, who gives Charlotte a new perspective on life.”

God, I love the covers that Sourcebook is reissuing her books with! But frankly if this had been the first Stevenson book I’d read, I doubt I would have sought out any more. A Patient Griselda heroine + an angsty hero whose emotions run hot and cold as well as a slightly saga feel means I would probably have written this author off. 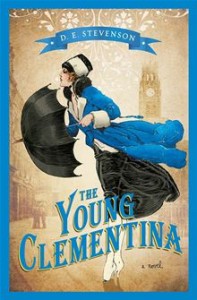 This has a very different feel to me from the previous two Stevenson books I read. I found less humor – in fact almost no humor – much more angst and – at times – a soap opera-ish feel. I had been expecting an immediate feeling of romance or at the very least a possible romance but after reading the first 2 chapters, I had to search out reviews to be sure that I would get one. Yes, it does eventually arrive but the journey is a long one and fraught with heartache. Oh, what one little lie and some innuendo can do.

In the Miss Buncle books, Stevenson presents mainly country folk who look askance at Londoners even as they prefer to stick to their Own Kind. This is even more the case here although Charlotte Dean recounts how she spent 12 years living in London. Since she was pining for the country the whole time – does it count? The country life is lovingly detailed in all seasons – its freshness, openness, and healing atmosphere. The people, however, can be just as judgemental as anywhere else, as Char realizes.

Her sister’s divorce proceedings were shameful and painful for Char while she was in London and as she discovers once she is among them again, the 1930s attitude to a broken marriage can be as pointed in the country.

The story and people are also products of their time and might come across as odd, disturbing or prejudiced to us now. The country people are horse mad, there is an older man who fancies himself in love with a much younger girl and the attitudes of the English in the story towards African porters and Australian aborigines are very 1930s.

Once the romance arrived, it was delightful. The only problem is that after a fleeting glimpse of it at the beginning of the book, it doesn’t arrive again until the very end. Frankly, I wanted more than what I got.

It does show life from early turn of the 20th century through the mid 1930s – the good the bad and the ugly. But it is a shattered “Young Love’s Dream saga of heartache bravely faced with a stiff upper lip, one must carry on in the face of broken dreams and duty to one’s ancestral line” sort of story as well. I didn’t find it as much fun as the Buncle books but if you’re looking for an angst-fest, it might be for you. C-

→ Jayne
Previous article: Friday News: What are you looking for in an HEA; Vonnegut Estate offers up books to fan ficcers; Selfish and mean folks don’t win, in the end
Next Post: #Giveaway: Mina Kelly, Sasha Miller, Shelli Stevens