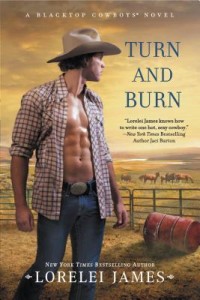 Fletch and Tanna enjoy a one night stand after he watches with humor as Tanna turns away suitor after suitor in local bar in Wyoming but decides that he’ll make his own pitch.  Tanna is agreeable to Fletch’s advances, in part because she likes the look of him and due to the fact that he sees through her various stories.  After a night of boot shaking sex, Tanna runs off and Augustus wants more.

Heart sore after a riding incident that resulted in a serious injury to her and an even worse result for her horse, Tanna has sought refuge with friends in Wyoming.  She’ll be working retail in the boutique shop at the Split Rock Ranch and Resort until she can figure out what she’ll be doing with the rest of her life. It won’t be barrel racing, though, because Tanna can’t bring herself to get back on to a horse.  Her friend hooks her up with a local horse whisperer to see if Tanna can overcome her fear.

Fletch finally catches up with Tanna because it’s a small town and even smaller community.  As Fletch’s feelings for Tanna grow, he begins to be dissatisfied with his life. Fletch is on call, all the time because of his solo practice. He rarely takes a vacation and all his non Vet related activities are shoe horned around his practice.  Having a relationship is virtually impossible with that lifestyle.  The resolution for Fletch’s issues are presented to him, gift wrapped with a Fletch colored bow on the top.

There really isn’t any question of whether Tanna will recover or whether Fletch will slow down and if a reader needs that urgency and movement in her books, she might be disappointed. There really isn’t anything that is urging one to turn the pages other than discovering when and how Tanna recovers and watching Fletch work through his reluctance to let go of total control.

And James book isn’t just about the couple, it’s about the community.  There are many people that come into the circle created by Fletch and Tanna.  If a reader hasn’t read previous stories, the constant reference to and frequent reintroduction of past characters can be a little tedious.   And one thing I just could not get into was Fletch’s nickname for Tanna.  “Say the word, sugar twang, and I’ll walk away.”

Overall, however, I appreciated the adult attitudes of Fletch and Tanna and their realistic storyline.  It’s not an overloud or exaggerated story but the quiet romance suited me at the time that I read it. It’s a welcome relief to the billionaires of the East Cost.B-