Trying to move on from a disastrous engagement, Sophie Morgan needs a date for her best friend’s wedding–and fast! And what quicker way to find a man than speed dating? Only it’s bar manager Dan Halliday who catches Sophie’s eye.

Dan can’t resist helping a damsel in distress, so he offers her a deal–a few shifts in the bar in exchange for the date–no strings attached. But when pretence leads to passion, they both get more than they bargained for. And it’s too late to have any secrets between them….

I was drawn to your book for a couple of reasons. Usually the “Romance” line works well for me because it features nice heroes, it doesn’t center on secret babies and the heroines have a backbone. I don’t ask for much. But once I started reading “Secrets and Speed Dating,” I realized I was getting a bit more than I bargained for: an anti-secret baby – something I haven’t seen in Harlequin books very much. 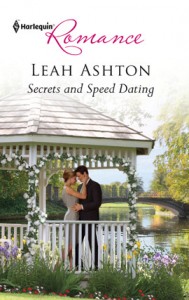 First, let me talk about the book’s basics. Sophie’s meticulous planning of every aspect of her life makes sense as you’ve written her history of getting through her cancer treatments. It’s how she does her life and it’s kind of cute in a way. Dan used to be – well maybe not quite that absorbed – but as obsessed with how he wanted his life to go. He’s learned to let loose and it’s fun to watch him shake Sophie up and get her to relax. I was enjoying the book up until the ubiquitous moment when Sophie has to suddenly – is this due to lack of word count? – change her mind about sex and their relationship gets hawt and she finds she can’t do “lighthearted, short fling” quite as easily as she thought she could and she gets hurt but then – also suddenly – Dan changes his mind and he’s ready for a relationship and then he discovers the Big Secret. Sophie asks him how he can do a 180 almost overnight. I wanted that answer too but felt it was more that it was getting close to the end of the book and there wasn’t enough time for it to feel believable. This part gets a C+.

Now let’s discuss what I was a little amazed – but in a good way! – to see here. It seems that Harlequin loves babies. There are babies all over the various line covers. Pregnant women are popular too. And the epilogues usually feature the happy, fecund couple. Readers better be able to handle diapers and formula for a lot of the lines. In this book, though, I began to get the feeling that you just might be dishing up something different. Sophie can’t have babies. Now I can’t count the number of times a book has started this way. The distressed heroine feels she can never have children. She feels incomplete. She feels less than a woman. But then by the end of the book – A miracle happens!! – and she finds herself preggers. Sophie feels this way too at times but she knows there will be no miracle baby. No man’s sperm will magically change the situation. This is it and a man has to accept it. She thought she had such a man but then he changed his mind and the news that his girlfriend is pregnant is a blow Sophie feels deeply. Her brittle confession to her speed dates attempts to narrow down the candidates but deep down Sophie hurts from this.

I’ve got to give you credit for writing this story line. And for not suddenly changing the game on us in the closing pages of the book. If someone really does want children but can’t have them, reading books which have couples who are granted their wish must hurt at the same time as she feels happy for that make believe child. But you’ve written something both bittersweet and truly moving. Dan wants kids and after losing his chance years ago, suddenly finding the perfect woman who makes him change his mind about “forever” and then discovering the secret she never thought she’d need to tell him because they were only supposed to be pretend dating for a few weeks, has to hurt.

But Dan gets a chance to know, deep down, what is really important to him: Sophie without children of their own or life without her. And I was cheering his soppy declaration that life without her was something he couldn’t imagine facing. Here’s a hero who affirms his heroine completeness, who knows what he’s getting into and who tells her that she’s all he needs. He accepts what they can’t have. It makes me happy that someone has written this book for all the women who aren’t going to have that miracle that they want so badly. For me, this part of the book is a B.

Most of the book is fairly standard for a Harlequin. There’s some fun, good stuff but the sudden changes for Dan and Sophie that were needed to set up conflict scene felt very predictable. Once the Big Mis had separated them for a little while and Dan came to his senses about what’s really important to him and poured his heart out to Sophie, I was happy. But I wish there had been a bit more space in the final section so that Sophie and I didn’t have to question his flip-flop so much. Still, I applaud you for taking a different road than usually seen with these baby centered plots. B-