“She dreamed of digging through ancient ruins–but the only exploring Anna Simmons gets to do is in the expensive houses she cleans in Pearlman, Michigan. When Brandon Landers hires her, she’s unsure whether to be furious or thrilled. He evicted Anna and her ailing mother, but she’s heard rumors of hidden treasure on his land. Treasure Anna decides to find. Not just for herself, but for new employer whose unexpected kindness has softened her heart.

Physically and spiritually wounded in the Great War, Brandon knows not to hope for the impossible–like buried riches or Anna’s love. Is there still time for them to learn that the only treasure they need is a lifetime together?”

Your Love Inspired Historical books have been on my radar for a while, mainly due to the early 20th century time period you’ve selected to use in them. It’s one I enjoy and thankfully one that is beginning to be seen more often. But “Legacy of Love” is the first I’ve sat down and read. I hate to say it but this is one of those books that I can read and be interested in while reading it but finish with nagging questions and unresolved issues which become more manifest the longer I think about them. 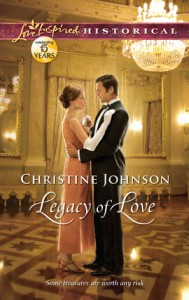 Basically I decided to read the book in spite of the blurb which doesn’t do the actual plot justice and would confuse me if I hadn’t already read the book. Brandon doesn’t actually evict Anna and her mother – that was going to be done by the new owner of their rental home. Brandon has enough honor to make sure the two women have a place to live because it’s his father who sold the house before his death. The why is that Brandon’s younger brother needed to be set up with a trust fund but there are unexplored hints dropped that the new owner would have traded the rental for Brandon’s house. Why? This is never explained.

Anna dreams of exploring ancient ruins but has no concrete plans or steps outlined to achieve them. She just seems to drift with a vague idea that one day she’ll go to college and study. For now she’s cleaning houses and might resort to working in a cannery. I never felt this aspect of her background was fleshed out enough. This plot line isn’t explored enough for me despite Anna’s determination to discover a hidden treasure in Brandon’s house. I guess it’s more that Anna is willing to spend time on the hunt and patiently piece together the clues that might lead to a find rather than that she’s going to head out and be an Egyptologist. I also am not thrilled that by the end of the book, she appears to be willing to totally give up on her dream in order to stay in Pearlman and assist Brandon with his rare books store. She does love the store and books and wants to make it a success but the understanding seems to be that her dream will be let go for his. This just made her dreams seem conveniently disposable and not a deep seated part of who she is.

Brandon’s dream is opening a store to sell rare books and highbrow literature. A noble goal, certainly, but his business plans are as concrete as are Anna’s tenuous dreams of archeology. As with Anna, this comes across as more a character checklist item – pick a job for the hero – rather than something that means a great deal to him. I realize that business models and competition were different 90 years ago but I honestly sat reading these sections of the book and thinking, “Good luck buddy. If you’re still in business next year I’ll be surprised.”

Brandon is good at being (rightfully) frustrated with his feckless, younger brother. Reggie breezes in and out of the story, causing problems then skedaddling. I’m not sure why or if you have plans for another book to wrap his character up or if his fate will fade into the background. As well, there are several young women in town who interact with him and who are also little more than character outlines rather than fully realized people. The book doesn’t end on a cliffhanger or anything – rather these characters are just left dangling and twisting on the wind.

Where I did feel a lot of emotion and intensity from Anna and Brandon was in jumping to conclusions and heaping blame on their own heads. Anna is young, only twenty, so her wild imaginings and leap frogging in logic is more understandable. Brandon’s ultimate decisions have a little more thought behind them but neither of them communicate particularly well before arriving at their (usually wrong) cross purposes. Each of them also has a major incident from the past which haunts them to this day. They both use these to think the worst of themselves at times – Brandon more than Anna – and both have to almost be hit over the head – repeatedly – before beginning to forgive themselves. By the time Brandon whines for the last time that Anna deserves better than he could ever be, I almost agreed with him.

Faith plays a role in them laying down their heavy emotional burdens but I’ll be honest and say that as a reader I almost felt as if I were being bashed with religion in this book. Of course millage will vary per reader and what they feel comfortable with but for me, even in this historical setting and with a hero suffering from post war issues, it’s heaped on with a backhoe.

I’ve had good luck with inspies. I’ve had bad luck with inspies. And sometimes what I get is a mixed bag. I liked this one for the setting used. I felt the religion was laid on with a heavy hand and the conversion of the hero back to faith practically lit with neon. But what I most regret is that the interesting premise of timing it 90 years after the discovery of Tutankhamen’s tomb and teasing us with a heroine who is said to be interested in archeology ultimately went nowhere and that I’m left with several questions that have – as yet – no answers. C-

Oh, and I wasn’t sure how in 1924 Brandon could refer to Edmund Hillary (born 1919) climbing Mount Everest since it didn’t take place until 1953. Seriously, an editor should have caught this.