REVIEW: Once a Playboy by Kate Hardy

I haven’t read too many of the Harlequin Medical Romance line up til now. I do like the medical slant of the stories and the fact that many of them are set outside the U.S. The short length, though, might turn out to be a problem for me as it seems to intensify the usual hurdles romance characters generally face on the road to a HEA. 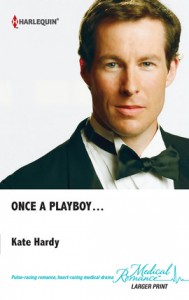 Serena James is finding it difficult to get her physiotherapy patient, gorgeous playboy George Somers, to quit trying to overdo it on his road to recovery from the accident that broke his leg, both wrists and injured a certain other delicate area (my mind is boggling trying to imagine this particular impact). George is an adrenaline junkie who finds it hard to stay still for long and this recuperation time is about to drive him mad. Not that he hasn’t enjoyed working with Serena….still he’s itching to get back to full strength so he can go full throttle again.

Something about this woman, who is the exact opposite of the rail thin clothes horse blondes he’s usually pictured squiring around, intrigues him and when she signs off on him as a patient, George presents Serena with some decadent dark chocolate (I’d love him for that alone) and an invitation to lunch – since she’s skittish about dinner with him. Slowly the two begin to know each other and lay bare their past romantic heartbreaks. Serena’s fiance couldn’t manage their colicky son and left when Ethan was a baby while George’s position as the heir to a barony scared off the only woman he’s ever felt deeply enough to take to meet the folks at the ancestral pile.

But each needs to come to terms with their potential relationship – lotsa baggage here – before there can be a HEA for them. Are they up to the challenge or will their pasts ruin their chance of a future together?

I did initially worry when George started having thoughts of asking Serena out at a point when he was still her patient. Good thing both are aware of the impropriety of that. Then came all their assorted past issues and the baggage. Serena is actually the one who seems most ready for a relationship (but then after five years without any sort at all I’m not sure if she should ease into it or jump) though she’s the one who plays it cool first and isn’t sure of the wisdom in getting involved with someone she sees as a high maintenance, aristocratic playboy. Still when she’s willing to let George meet Ethan, it’s pretty obvious to me that Serena trusts George. A mother letting a man meet her child is Serious Stuff.

No, it’s George who’s the heel dragger here despite initially pushing for Serena to go out with him. George has deep abandonment issues (Mummy who left him when he was a child, you know) and then there’s the one girlfriend he thought he loved and took home who panicked and ran rather than trying to work with him about her fears of fitting in among the aristo set. George also isn’t sure about becoming an instant father – even though he’s great with Ethan. In fact he always thought Doing His Duty for the Succession would be a PITA and is surprised to find out how much he likes being with Ethan. Hey, fatherhood might not be so bad after all. If only his accident hadn’t smashed his junk and raised the likelihood that in order to father children extensive rounds of IVF could be called for. I wondered at the inclusion of this truncated subplot since the epilogue jumps to Three Years Later by which time it’s a moot point.

Oh well, none of that will matter because George keeps bolting this time around. He gets a glimpse of life with Serena and discovers the idea so nice that he skitters away like a crab. Poor Serena who’s finally coming around to liking a relationship with him gets texted that it’s over. Way to go, George. Then George and Serena cross paths and actually end up at his place scorching the sheets. The about-face of this is part of what I mentioned as being a problem for me in this book. Yes, no, push/pull, let’s go/stop. There seems to be no middle ground, take it easy, perhaps I should talk with him/her before jumping to extreme conclusions. I realize that the word count you’re working with is probably the cause of these sudden 180 degree relationship directional changes but even with me rooting for these two – and I do like them both and want them to achieve a happy ending together – I would start to brace myself for the next “Whoops no, can’t do this” breakup between these two.

When George finally gets his act together and proposes to Serena – which was lovely, BTW – my first thought was, “Really? You’re both sure this time?” I will award points for including a lot of “Serena at work as a physio” scenes. This is a nice grounding touch for the book and shows how dedicated she is to her patients and her job. I was also a bit stunned that not only is a condom mentioned – though with George’s junk injuries it wasn’t necessary to prevent pregnancy – but Serena also takes a morning after pill – which perhaps I’ve just missed seeing mentioned in a Harlequin book before. If only there weren’t those pesky relationship whiplash issues….C

→ Jayne
Previous article: Review: The iPad Mini, the most dangerous competitor to the iPad yet
Next Post: Daily Deals: Contemporary, PNR, and backlist Historical for $1.99 each