REVIEW: Exposed to You by Beth Kery

With the provocative opening, the book had a lot to live up to but I felt it fulfilled its promise. I must admit that part of my appreciation for the story may be because of the character tropes presented. 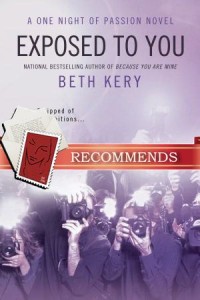 Joy is emotionally closed off and Everett is more impulsive, a “creature of instinct” his sister calls him. This was consistently displayed throughout the story. Even when Joy was doing things that were outside her comfort zone such as allowing Everett liberties in a public space, she was making a deliberate conscious choice.

Joy was a realist, that much could be said about her. Life had taught her again and again that escape from an often harsh world was not a possibility. But life could be beautiful, too, and exciting, even if those moments were ephemeral.

She followed Everett into a warm summer night. The long, black limousine glided up to the curb like a magical carriage. Everett glanced back at her. A lock of hair had fallen onto his forehead. He smiled, and she smiled back.

She might as well enjoy the fantasy while it lasted.

Everett, on the other hand is going more by feeling and emotion which works for him because he’s portrayed as intuitive and fairly capable of reading the environment around him more accurately than others. Everett would have to be this type of character to be able to break through Joy’s barriers.

I also liked that Joy’s reticence put Everett back on his heels, not that I think he was portrayed as arrogant, but it provided some justification as to why this woman out of all the women he could have had intrigued him so greatly.

Joy’s emotional barriers were formed during the five long years it took for her mother to die of cancer. Her father couldn’t hack it and left when Joy was 16, just two years before her mother would pass. Her uncle Seth was there to help but it was Joy’s daily and hourly pain.

When she was diagnosed with cancer herself she withdrew from her friends and family, moving to Chicago to undergo treatment, heal, and wait. Joy does not want any one to suffer the pain she did while her mother was dying. This creates the big conflict. As Joy becomes more emotionally attached to Everett, her fear of causing his pain increases proportionally until that fear overcomes her.

She’s healthy now but Everett is her first love in a long time and she can’t seem to let her guard down fully because he makes her feel raw and exposed, hence the title. (I don’t think the cover really fits even though the title does perfectly.

What was wrong with her? Why did she feel so raw every time he made love to her? She couldn’t put the feeling into words. It felt almost unbearably good to give in to the elemental lust he inspired in her, but afterward she felt like a walking exposed nerve. For some stupid, inexplicable reason, it reminded her of making eye contact with other cancer patients she randomly encountered during her chemo. Usually, they dropped their gazes. Joy understood. She’d learned to do the same.

It was all she could take to manage her own survival. It was too painful to consider another’s struggle . . . another’s mortality.

→ Jane
Previous article: REVIEW: Legacy of Love by Christine Johnson
Next Post: Daily Deals: Irish historical romance; a couple of RS; and a fantasy book $2.99 and under