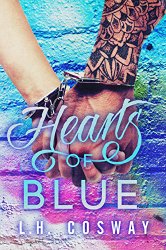 She upholds the law. He breaks it.

In not-so-fair London, where we lay our scene

From gun crime to petty theft

Where family is blood and survival makes hands unclean

In this place, we find two hearts who should be foes

And yet, amidst the turmoil their love still grows

Misadventure abounds and the divide will bring them strife

But with luck, death doesn’t always mean an end to life

I’ve been meaning to read another of your books and have actually collected quite a few on my ereader. Deciding it was finally time to actually follow through on my intentions, I picked this one – a fairly recent release.

Lee and Karla have similar childhood issues when you dig beneath the surface: terrible parents/no parent and no support or encouragement. Lee and his brothers fall into crime because it’s the only way to eat and survive. Both live in the crime ridden areas – Lee because he always has and it’s how he survives and Karla because that’s where she works as a constable. The chemistry crackles off the page and like a cold, can’t be hidden from view from anyone. Or at least not the way Karla and Lee stare at each other – like hungry panthers. Lee is a cheeky sod with an ego the size of the London Eye.

Lee is totally honest with Karla about his feelings for her and opinions about a relationship. It’s almost too honest and out there. He really lays it on the line, no holds barred and makes Karla always feel she’s the center of his world, whether or not he’s pissed. It’s like he almost can’t help being flirty and sexy around her any more than he can stop breathing. What he tells Karla exactly why he likes her and keeps after a chance with her, well it’s pretty amazing stuff. But he is who and what he is and she is who and what she is. The gulf is wide.

Karla and Lee keep meeting professionally and it worries Karla how quickly Lee resorts to violence to settle things. Yet, as he says, he lives in a war zone and kumbaya won’t cut it. Lee and family might have once needed to steal and commit other crimes in order to eat but not anymore and now the Cross Bros might be tied to who knows who doing who knows what.

Karla seems almost drugged around Lee but as she keeps trying to tell him – and let’s be honest, herself – she can’t have a relationship with him. She has too much at stake unless she’s willing to lose it all. Yet, slowly she is seduced into recklessness, into wanting more despite knowing what it might cost her. She also gets hard evidence that not all criminals are bad and not all cops are good. Still she wants to have her cake and eat it too. It has to go bad sometime. This goes on for a bit, maybe too much of a bit. Rinse and repeat. After watching Karla stick her fingers in her ears and then her head in the sand that many times, it started to get boring. Yes, she can’t resist Lee. Yes, she melts just from his kisses. Yes, he turns her to jelly with monumental sex. Yeah, got it now give me some story.

When the action finally picks up again, it only makes Karla look weak and indecisive. Like a hormonal teenager who wants both sides then lashes out at others when her choices get her in trouble but who then flips right around and melts for Lee again. It makes me want to shake her. Pick a side and stay with it. Either you’re a cop or you’re not. And for someone who’s been a cop for seven years, she sure has trouble putting 2 and 2 together sometimes. Then she goes totally stupid in a way that had me practically yelling at my ereader. How many excuses is she going to make – to herself and to others?

Well, the fit hits the shan, stuff is done and Lee makes some decisions about how his life is going to go. And isn’t everything suddenly peachy? This I really had trouble with – the whole book is the big bad criminal Cross Bros and their even bigger and badder crime bosses and the price to pay for leaving this life. Then everything, well most everything, is smooth as silk and happy sunshine. A bit of long meandering about later and I’m ready, unfortunately more than ready, for the book to be over. The bang up start slowed into a mess then shuffled to the finale for me. Averaging the whole, I guess I’ll go with a C-