REVIEW: Listen to the Moon by Rose Lerner 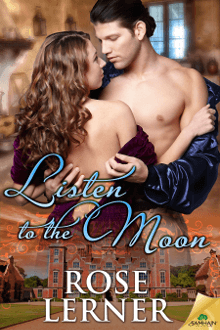 I read (and enjoyed) the first book in the Lively St. Lemeston series, Sweet Disorder. I hadn’t gotten around to the second book in the series yet, but when I heard that this, the third book, would feature a valet and a maid as the hero and heroine, I scooped it up. As any historical romance reader knows, it’s unusual enough to have a book that doesn’t feature aristocrats as the hero and heroine – to have both characters be working class is rare indeed.

John Toogood was valet to the hero of Sweet Disorder, but the hero’s formidable mother had him fired and blacklisted for not interfering with a romance she thought unsuitable for her son. He is looking for another position, but finding it difficult, due to the aforementioned blacklisting. Meanwhile, he is renting a room that happens to be the former residence of the heroine of Sweet Disorder. He renews his slight acquaintance with Sukey Grimes, who is a maid-of-all-work at the boarding house across the street and also cleans at John’s boarding house on a weekly basis.

John and Sukey have several encounters and the initial attraction between them deepens, but Sukey’s wary of being turned off from her job if she’s seen to be consorting with a man. (Sukey’s also just wary of men, in general.) She gets turned off anyway, for “stealing” (eating two raisins from the dinner pudding), and it just so happens that her disastrous firing coincides with an intriguing offer from John. He’s been given the opportunity to interview for the butler position at the local vicarage, but the vicar insists on a married man. The last butler abused the women servants and the vicar believes that a married man is a safer bet. John impulsively offers marriage to Sukey, both because he really wants the job and because he’s so attracted to her. She turns him down at first – Sukey doesn’t want to get married, ever. But after her firing she decides to take a chance on John; there will be a job for her too at the vicarage, as the housekeeper (which is quite a step up in the world). So they marry, on short acquaintance and with a host of differences between them.

For one thing, though they’re both of the servant class, John is much higher up in that world than Sukey is. He was born into service in a great house, raised first to be a footman and then a valet to a wealthy and prominent man. Sukey was raised in near-poverty by her mother after her father left (more on that in a moment) and is really at the lowest rung of the servant class; she’s basically just trying to survive when John comes along, and not having a great time of it due to the mean-spirited miserliness of her employer.

Perhaps because of their different upbringings and positions (as well as innate personality characteristics), John and Sukey take a very different approach to a servant’s life. John is the picture of domestic rectitude; he feels that anything worth doing is worth doing well, and that even the best effort can always be made a little better. Sukey feels that good enough is good enough. It’s easy to understand why and how they have these disparate attitudes – John gets real satisfaction out of doing his job well, and Sukey just plain doesn’t like having to clean for and serve other people. Also, Sukey is young and naturally a bit flighty.

Which actually brings me to another issue; the rather significant difference in their ages – Sukey is 22, John 40. This may bother some readers, and I had mixed feeling about it – on the one hand, I liked that it was actually addressed, at length. John is sometimes paternal with Sukey, and Sukey knows that there’s a part of her that wants to be taken care of. She was abandoned by her father at age seven, who left her and her mother, moved to another town and started a (bigamous) family with another woman. Sukey has daddy issues that are wrapped up in her abandonment issues and it would be understandable if a reader found it all sort of squicky.

Here’s my take on it: it is what it is. John and Sukey just *aren’t* equals in many ways, and their age difference was one of those ways. Again, at least the book addresses it and they both try to work through what their relationship should look like and how it should work. When John muses as to whether she sees her father when she looks at him, it’s one of many moments in the book that I found simultaneously admirable and not-terribly-romantic.

Ultimately, over and over, Listen to the Moon’s scrupulous realism can be seen as both the book’s main strength and its chief weakness. John and Sukey settle into wedded not-quite-bliss at the vicar’s house, but many little problems crop up to spoil the smoothness of the matrimonial road. There are issues with the servants already in the house, and John feels like Sukey takes their side rather than his (to be fair, she kind of does). Sukey feels that John doesn’t understand people who aren’t like him – who are in service because they *have* to be, in order to avoid the workhouse or just plain starving to death. Both have trouble communicating their feelings and being understood by the other. John is sometimes embarrassed by Sukey’s rough manners and broad Sussex accent (which made me indignant on Sukey’s behalf, though to be fair he is ashamed of his snobbishness). Basically they both have a lot of insecurities they have to work through, together and separately, in order to have a happy marriage.

This is probably the opposite of the Big Mis novel, and I loved that about it. I loved that there are things about John that Sukey just doesn’t like – that all her life she’s wanted someone who is “generous” with her, in every sense. She never got that from her mother, who was too bitter over her father’s defection to be a loving parent. She certainly never got it in any of her positions. Now, having to deal with John’s inherent perfectionism, Sukey once again feels the lack.

John’s not a villain, though, or even really that flawed. He’s just good guy with some personality quirks that sometimes rub along badly with Sukey’s personality quirks. Sure, he can be inadvertently sanctimonious, as when he advises an unhappy housemaid:

“I think you will find that the best medicine for trouble is to keep your mind occupied. Over time, the pain lessens, and the satisfaction in industry and self-reliance grows.”

John means well, and he’s not even wrong. It’s just that his firm, no-nonsense, pull-yourself-up-by-your-bootstraps mentality can appear (and can actually be, again inadvertently) callous and clueless.

One could be forgiven for thinking that perhaps John and Sukey just aren’t that well suited (particularly at the mid-point of the book, when it seems that they go from petty quarrel to petty quarrel), but actually they are, in many ways. For one thing, they’re very sexually compatible; the love scenes are effective (and I say this as someone who’s been a romance reader long enough to be mostly burnt out on love scenes). For another, I came to realize that they needed each other to grow and become better people. John needed some lightness and laughter in his life; he needed Sukey’s sense of fun. Sukey needed a man she could trust, to heal the hurt of her father’s untrustworthiness. She also needed someone who could teach her the pleasure of honest praise for a job well-done, and who would indeed be “generous” with her.

Sukey’s life isn’t the typical romance fantasy where the poor heroine becomes a duchess. She starts off as a servant, and she ends as a servant. But she does come up in the world, and with that she gains a measure of self-respect, dignity and contentment (apart from what she gains from being in love, of course). The same is true of John, too, but then John starts off more content with his lot in life than Sukey does.

There’s a tenderness between John and Sukey that really is romantic. Early on in the book, and then again later, when they are married, John cleans Sukey’s books (her only pair of boots, naturally) by hand. He does it to show he cares for her and because he wants her to have things that are nice. I thought that was very sweet, and they mean a lot to Sukey (“She couldn’t remember the last time anyone had taken so much care with anything to do with her”).

Listen to the Moon probably won’t be for everyone. For one thing, the age difference probably *will* bother some readers. And the very internal nature of the conflict may seem repetitive and frustrating at times. To me it was one of those books with quieter pleasures, instead of big sweeping dramatic angsty moments.

I was a bit apprehensive about how I was going to grade Listen to the Moon as I got to the end of it. I’m something of an instinctive grader, and I feel as a result sometimes my grades don’t seem to totally match my reviews. When I was mired in anxiety over John and Sukey’s bickering, I felt like this book was about a B, but that seemed unfairly low for a story so well-told and one that manages to subvert so many of the tired old romance conventions that cranky readers like me always *claim* they want subverted. Towards the end, I felt like it *deserved* an A, for being so different and for really creating complex characters whose actions make sense given their backgrounds rather than just being determined by the needs of the plot. But then I got annoyed by a last minute bit of self-sacrifice, which, while in character, was just a bit too much for me at that point in the story. So my final grade for Listen to the Moon is an A-.