REVIEW: The Lie and the Lady by Kate Noble

Last year, I read and reviewed the first book in your Winner Takes All series, The Game and the Governess. In that book, the hero and his secretary, a man whose family had once owned a flour mill, switched places for a wager. 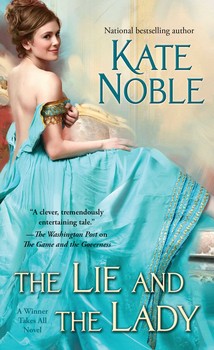 When I heard that John Turner, the secretary, and Leticia Herzog, Countess Churzy, the woman who had sat her cap for him thinking that he was an earl, would be the central couple in this book, I was curious to see how their courtship could resume after John’s deception.

The answer is that it doesn’t resume, at least not right away. Instead, Leticia moves on. The novel begins with a prologue set during the summer when John, masquerading as the earl, fell for Leticia and she for him. In the prologue, John and Leticia almost make love, but his conscience raises its head and he stops because they go too far, without revealing what it is he hasn’t told her.

Then we flash forward a year. It’s the following summer, and Leticia accepts a proposal of marriage – from another man. Sir Bartholomew “Barty” Babcock is heavyset, far from intellectual, and has gout, but he also has a good heart.

Leticia met him after she sold all her jewels to finance a trip to Paris in a last bid to catch a husband from the upper classes. The daughter of a middle class family whose sister had made a brilliant marriage, Leticia would have remained a wallflower had not her late husband, an aristocrat from Austria, asked her to marry him for ulterior motives.

The marriage wasn’t all that Leticia could have dreamed of, and it made her crave greater security, something she thought she had attained when the “earl of Ashby” fell in love with her. But when John’s lie was revealed, Leticia became the butt of cruel jokes. Her trip to France was as much an escape as a gamble that she would meet an eligible bachelor on his grand tour.

Now Leticia, almost all out of funds, says yes to Sir Barty’s proposal. She is determined to be a good wife, and so as not to have the scandal with John ruin her relationship with Sir Barty, she tells him about how she had believed herself in love, only to learn that the man had misrepresented himself.

She does not, however, give him John’s name.

When the newly engaged couple arrives at Sir Barty’s estate at the village of Helmsley in Lincolnshire, Leticia is stunned to realize that Sir Barty’s daughter Margaret isn’t a small child as she supposed, but a grown young woman—one whom Leticia immediately antagonizes and has to make amends to.

But that’s not the worst of the shocks Leticia will confront in Helmsley, because when she realizes Margaret is in love, Leticia ferrets out that the object of Margaret’s affection is none other than the owner of Helmsley’s newly refurbished flour mill, John Turner.

Having tried and failed to win back Leticia after the debacle that was his summer in disguise, John isn’t sure how to feel about Leticia’s presence in Helmsley. On the one hand, it could bring about a second chance with her, which is what John wants more than anything. But on the other hand, it could also spell disaster for him and for his livelihood, since Sir Barty estate is the region’s largest producer of grain.

At the first opportunity to speak alone, Leticia and John agree not to reveal their prior connection, and to continue leading separate lives. But can they keep from revealing their feelings? And can they be sure no one in Helmsley knows that John is the man who impersonated the earl of Ashby the previous summer?

Because of the way The Lie and the Lady is constructed around Leticia’s engagement to John, the romance between Leticia and John doesn’t take off immediately. Compared to a lot of today’s romances, this one hearkens back to some of the genre’s older classics in its willingness to take its time.

Then, too, John and Leticia aren’t immediately “sympathetic” in the sense that readers sometimes look for. John lied to Leticia and later compounded his mistake by refusing to apologize, telling her he couldn’t because he would not have met her if it weren’t for his deception. Leticia, for all that she means well and intends to make a good wife to Sir Barty, isn’t above some selfishness and has a calculating turn of mind.

But for all that, I fell in love with the book, and especially with Leticia. As much as I can enjoy a character who comes off as likeable from the very first page, there is something to be said for characters with some flaws and complications. They can feel more believable, and when they win me over, as Leticia did, the experience of reading about them can delight, absorb, and thrill – all the things this book did.

Though there would be no story without John, this really is Leticia’s book. From the way her relationship with Margaret and with Sir Barty transforms to the itchy skin she gets in the vicinity of Palmer Blackwell to her campaign to win over the women who are the linchpins of Helmsley’s small society, she is at the center of the novel. We see the village and its inhabitants chiefly through her eyes.

As for John, I wasn’t sure I could come around to liking him given his actions in The Game and the Governess, but I did. This is all the more remarkable because he never groveled or even apologized. Instead what convinced me that he was the man for Leticia was that he had her number. No one else entirely understood who she was, but John saw her and respected her for exactly that.

The other thing I liked about John was that just as he understood Leticia, he also understood himself. In direct contrast to the masquerade he chose to undertake in the earlier book, here we got to see that John had no pretensions.

Here he represented himself unapologetically exactly as he was – middle class, the owner of a flour mill – and had no aspirations to anything else. Not because he wasn’t ambitious – he was, in fact, determined to have the most up to date and innovative flour mill in the area – but because running a flour mill was what he found most satisfying, and he knew himself down to his bones.

In a genre filled to the brim with dukes, earls and marquesses, this felt remarkable.

Even though Leticia was a social climber and John was not, it was clear from the way they were portrayed that they would fit together well and make a great team. A scene in which Leticia brings visitors to John’s mill showed what an asset she could be to him, if she could only admit that he was right for her and extricate herself from her engagement.

This was a big romantic tangle, not just a triangle, or even a quadrangle—maybe a hexagon? I don’t want to spoil the way Leticia’s own lie of omission (her withholding of John’s identity) complicates her life and those of others, but I loved that in the end, these got untangled in a refreshing, clever and touching way.

I also came to love the other characters, most especially Sir Barty and his daughter Margaret, but really pretty much all of them. Even the villains had some interesting quirks. There was a sense of community to Helmsley, too, something I appreciate in a setting.

While the romance takes a little while to get off the ground, The Lie and the Lady is a rewarding book. I’m pleased to have found the first satisfying historical of the new year. B+/A-.