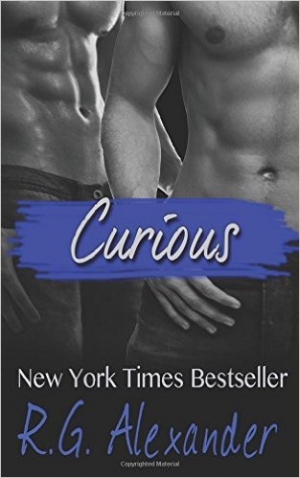 Jeremy Porter is. Though the bisexual comic book artist has known Owen Finn for most of his life—long enough to know that he is terminally straight—he can’t help but imagine what things would be like if he weren’t.

Owen is far from vanilla—as a dominant in the local fetish community, he sees as much action as Jeremy does. Lately even more.

Since Jeremy isn’t into collars and Owen isn’t into men, it seems like his fantasies will remain just that forever…until one night when Owen gets curious.

Warning: Contains explicit m/m nookie. A lot of it. Very detailed. Two men getting kinky, talking dirty and doing the horizontal mambo. Are you reading this? Do you see them on the cover? Guy parts will touch. You have been warned.

I took a chance on your book because one of the reviews I read promised interesting leads and positive female characters. I have never read anything else you have written.

The book certainly delivered on the promise of positive female characters.  I liked Tasha a lot and hope that in her own book she would remain just as much of a bold and no-nonsense main character as she was a supporting one in this book. I know that she is getting her own book because I have read the summaries of the books to come in this series on Amazon. I also thought that Jen Finn had all the potential in the world to be a great character and she already showed promise in this book.

But this book was billed as m/m romance and I was not satisfied with the romantic storyline, which is presumably the main storyline of the book. What we have here, or I should say what we *should have here* simply because blurb promised that, is the “from friends to lovers” romantic trope. What we have here instead in my opinion is two people, who we were told had been friends forever, discovering that they want to have a lot of sex together and be together as a result of that.

At Owen’s 35th birthday he is hanging out at Jeremy’s house. He confesses that he has been attracted to Jeremy for a while and wants to explore that connection. At first Jeremy is reluctant, but his reluctance does not last long, so they explore and explore and explore.

Owen’s story is essentially a Gay For You story. I get that both of them liking variety in their sexual exploits was supposed to make his matter of fact acceptance of his feelings for his friend believable, but for me it felt a little bit silly. Owen is not revealed as bisexual, shouldn’t we see a little bit more of him working out for himself why he, a straight man, has fallen for another guy? I guess the fact that the two are best friends is supposed to make the transition “from friends to lovers” believable, but the problem is when the story begins we are just told that they were best friends already. We do not see them connecting about the stuff other than sex and to me the connection through sex in this book just was not deep enough.

I kind of liked their misunderstanding/temporary break up – not because I like such misunderstandings in general, but because for once they were actually shown attempting to communicate in a language other than sex.

→ Sirius
Previous article: New Releases, Week of August 4, 2015
Next Post: DAILY DEALS: A reboot of an old favorite, Bored rich young things, and an end to a familiar historical series