REVIEW: Made with Love by C.E. Kilgore 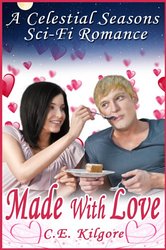 A contemporary Valentine’s romance with a Sci-Fi twist!

After escaping an abusive relationship, Rosalie is baking her way to stability for her new pie business and five-year-old daughter, who suffers from Muscular Dystrophy. A chance meeting with Garry through her best friend, Noelle, Rosa thinks she may have found a way to make her daughter Mary’s wish for a father come true – if Rosa can put aside her bad memories and learn to trust again.

Garry is strong, stubborn and big hearted – the qualities expected of a Vragan. Crash landed on Earth, he decides to take a chance, seeking more than friendship with Rosa. He knows it will mean trusting her with his secrets as well as his heart, and he’ll gladly eat every pie in her shop if it means being able to spend more time with her and Mary.

I had such fun reading the first book in the Celestial Seasons series and following along with the song title chapter headings,“Noelle in His Heart,” that I immediately bought this one. I liked it but do have some reservations about certain aspects.

“Made with Love” is a direct sequel to the first book so it’s helpful to have read that since there is a story arc and more details about how this group of aliens crash landed here on Earth yet I think in a pinch this one could be read first. However since even more details are revealed about all the space aliens, skipping around stories from here on out would probably be problematic.

Unlike Steve, the hero in “Noelle,” Garry and his brother Mike don’t physically look that different from humans. Garry’s main difference lies in his appetite and his strength. He’s found the perfect heroine for him in a baker, Rosa, and her daughter Mary. Seriously, Garry’s going to eat her out of pecan pies.

Since all the aliens are kind and basically pretty sweet, the drive for the plot lies a bit externally. In this case, it’s Rosa’s daughter with MD and Rosa’s physically abusive ex-husband. Plot moppet Mary is mainly there to serve as a reason for Larry to show up again and for Garry’s Oath protective instincts to kick in thus causing a (short lived) separation as his strength and the violence, with which he defends Rosa, at first merely make her afraid of him. Given her terrible past marital relationship this makes total sense.

While in the first book, the heroine had no trouble accepting her alien hero, here Rosa puts the breaks on and has to take a while to wrap her brain around Garry’s alien-icity. As I’ve been waiting for an Earther to say “WTF?? You’re all aliens?” my response was “about time.” But Rosa already loves Garry and when someone finally explains to her what a Vragan Oath means, suddenly she’s all over it and him.

This is all fine, well and good since this is a novella but I felt that given her history Rosa was very quick to be ready to let Garry into her life after only knowing him for less than two months. Garry, meanwhile, is basically perfect and totally in love with his new Earther family.

This one is short and seriously sweet – well the heroine does bake cakes, tarts and cupcakes for a living – and not for anyone looking for angst. C+