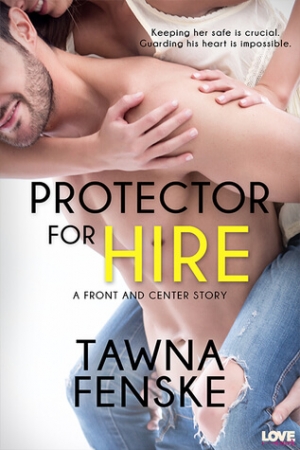 One of the commenters here mentioned that your books were funny when one was included in a Daily Deals post so I downloaded the freebie and bought a couple others.  I recently read and enjoyed Marine for Hire which I reviewed at my personal blog. It was funny and had plenty of laugh out loud moments for me. When I saw that Protector for Hire had been submitted for review, I was hoping for a similar experience.  The blurb sounded right up my alley too – reclusive mountain man agrees to protect a woman by hiding her in his remote cabin, cue hijinks and romance and a little danger near the end.

I don’t know if it was me or not but, unfortunately, I had trouble connecting with this book. There were some set pieces which, on perhaps another day, I’d have laughed at but which fell flat for me the day I read them. There are a lot of double entendres one can use regarding chopping wood and coffee filters (well, the coffee filters one did make me smile).

“Stop,” he murmured, or at least that’s what he meant to say. It came out sounding more like “Yes,” which probably wasn’t the same thing at all.

The conceit of the series is that the Patton siblings are all names for famous military figures – hence, our hero is Schwarzkopf (or “Schwarz”) Alexander Patton.  He was in the Army (he likes to be different – the rest of the family are marines) and ten years earlier, lost his team in a roadside bomb explosion in Afghanistan.  Schwarz was injured himself and spent some time in a coma. When he came to, he hightailed it into the mountains and his family haven’t really seen him since. He sends birthday cards and Christmas gifts but the only person who even has a contact number for him is his brother Grant.

Janelle Keebler is the sister of a previous heroine. It turns out her ex-husband was an international heroin dealer (and not strictly in “the pharmaceutical business” as he had told her he was).  After their divorce, the ex, Jacques, turned into a stalker type and it culminated in him beating and killing a man in front of Janelle*.  Now Jacques is looking for Janelle because she is a witness he needs to “take care of” and Janelle needs a place to hide. Cue Schwarz.

(*I gather some of this happened in a previous book I haven’t read?  It felt like a re-cap on the page and I admit I was a littlel bit lost, although it wasn’t strictly necessary for me to understand everything about what had gone on before to get what was happening in this book.)

Schwarz is grumpy, morose and a man of very, very, few words.  Janelle is a city girl who loves her lattes and likes to chat.  Thankfully, Janelle wasn’t a clueless city girl. She took to mountain living fairly well and didn’t cross into TSTL territory and the gags weren’t at her expense.  Yay for that.  Even at the end, while her actions were impulsive, she wasn’t, in the circumstances, disregarding her safety.

After 10 years, Schwarz  is probably about ready to venture out more so I guess that explains why things change so quickly.  The story is under 200 pages and covers a fairly short time period – so the romance is fast. I thought the excuses to get them in the same bed were pretty thin and I couldn’t quite believe that Janelle would be comfortable jumping in to bed (sleeping only at this stage) with someone she’d only just met, no matter how hot he was.  I think, there was a jump to attraction and getting hot and sweaty with each other that I couldn’t quite make.  It seemed to come out of nowhere and it left me behind.  Perhaps it was that which was the cause of my problem with the story because, afterwards, I mostly felt a little out of sync with the book.  I even put it down at one point and read another novella in between to try and give my brain a reboot.  This actually had some success because the latter part of the story worked better for me than the beginning.

Ultimately, I think the plotting of this story was a little thin for me and the humour wasn’t enough to sustain my interest.  The sex was hot and Schwarz and Janelle certainly had some chemistry but I still felt a little underwhelmed.  Looking back however, there were a couple things that did make me chuckle, even so.

“You’re wondering if I’ve taken a vow of celibacy out here in the Montana wilderness.”

“Well, yeah. Kinda. If it’s too personal, you don’t have to answer.”

“Honey, you’ve been rubbing your thigh on my hardon for the last five minutes. I think we’re past the point of personal.”

She gasped and started to pull back, mortified.“ I thought that was your hip bone. Oh my God, I’m so sorry.”

It isn’t until late in the book that Schwarz opens up about what happened in Afghanistan and I must say that here I think you did very well to maintain Schwarz as a flawed human who tried his best but didn’t always get it right. It’s fairly rare, I think, for a hero to be shown this way and I appreciated the message his family gave him about this.  I think it’s a good message and in some ways it was the highlight of the book.

The story didn’t grab me like the previous book of yours did that I read but it wasn’t awful either. I’m left with a reaction which can be summed up as “it was okay’ which may well be damning with faint praise.  I do plan to read more of your books but this one wasn’t as successful for me as I had hoped it would be. Grade: C