REVIEW: The Danger of Desire by Elizabeth Essex

The Danger of Desire opens in the POV of a young woman named Meggs. Meggs, a London street thief, and her younger brother Timmy, are preparing to steal near the Admiralty building. Meanwhile, Captain Hugh McAlden is in the same building, meeting with Admiral Middleton, who tells him the Admiralty Board has been infiltrated by a traitor who is passing secrets to the French. 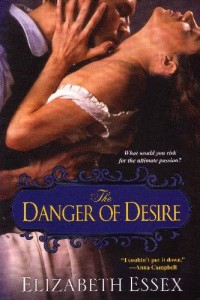 Hugh is tasked with catching the traitor, and promised a knighthood if he succeeds (he is the son of a gentleman father and his mother is a viscountess through her second marriage). In the past, Hugh has used street kids to help him ferret out information, and he decides to do so now. On exiting the building, he sees Meggs execute her theft, and he pursues her and then makes her an offer.

A suspicious Meggs escapes Hugh, but injures her hand in the process. When the wound becomes infected, Meggs decides she has nothing to lose by finding out more about Hugh’s proposition. Eventually she agrees to help Hugh. A surgeon treats Meggs’ injury, and she and her brother Timmy move into Hugh’s house, where Meggs trains as a scullery maid in preparation for infiltrating the spy’s household once that spy has been identified.

Hugh and Meggs are attracted to one another from the beginning, but neither trusts the other fully. As they track the suspects down they begin to grow closer, though Meggs worries that Hugh will take Timmy away from her. Meggs was born in the country, and everything she has done has been to provide for her brother and to save enough money to escape their London street life.

Eventually Meggs and Hugh do identify the villain, and Meggs enters his house posing as a scullery maid. She faces great danger there, but sees her growing feelings for Hugh as equally dangerous, since the gap in their stations still threatens to separate them.

The Danger of Desire starts off at a leisurely pace and then ramps up midway through. For that reason, I enjoyed the second half more. Most of the romantic development in the first half consisted of Hugh and Meggs wanting each other but refraining from acting on these feelings, and with the exception of one or two scenes in which they shared something of their past, they didn’t get to know each other as well as I would have liked.

Once Meggs infiltrated the villain’s house though, the tension thickened and this was one of my favorite parts of the book. The emotions resulting from the risk to Meggs made for a deeper romantic connection between the characters in the second half.

Speaking of the characters, I preferred Meggs to Hugh. Hugh was mostly a good guy and I did like him, but for a good chunk of the book he was not only Meggs’ employer, but also in a position of power over her due to their disparate positions in society. For that reason, I had mixed feelings about his lusting after Meggs.

Meggs was a lovely character, outwardly hardened by her years on the street, but with a core of softness inside. She began the book almost feral in her reluctance to trust most people and her transformation felt believable to me. Her protective relationship with Timmy, her twelve year old brother, and her feelings for Hugh touched me and evoked my sympathies.

You have a gift for writing endearing heroines and hot love scenes. Even the lust leading up to the consummation wasn’t too bad. The reason I say “even the lust” is that like Jayne, I am not a fan of mental lusting. I think it can often feel repetitive and intrusive in a book. It has to be exceptionally well-written, used very sparingly, or played for humor (a la Loretta Chase or Jennifer Crusie) for me to enjoy it. The lusting did feel somewhat intrusive and repetitive in this book, but wasn’t as big an irritant to me here as it is in many books.

There were some inaccuracies in the book – for example, Meggs, Timmy, the butler and the housekeeper dine with Hugh at his supper table, although this is acknowledged to be unusual. Hugh is so egalitarian that it is difficult to believe he was brought up within a class structure. The navy was said to be the reason, but I still found it unlikely. Also, contemporary expressions like “Gotcha,” and “What are you gonna do” pepper the dialogue.

As I was reading The Danger of Desire, I was reminded just a tiny bit of the books of Julie Anne Long, another author whose books contain inaccuracies, and who uses well-trod tropes in ways that still manage to feel fresh. She is also another author whose heroines are frequently endearing and whose use of words is lovely.

I thought of Long because her writing can make me willing to overlook departures from historical fact. You have an appealing prose style that gets me over similar humps, and the heroines in A Sense of Sin and The Danger of Desire are also lovable in a way that felt real.

SPOILERS: [spoiler]There were some other improbabilities in the story as well. I felt that Meggs’ lack of sexual experience was unlikely given her life on the streets. Hugh’s virginity was also difficult for me to credit, in a twenty-eight year old sailor. Also highly improbable was the way Meggs and Timmy became separated from the family they were born to.[/spoiler]

When it comes to grading The Danger of Desire, I feel torn. It wasn’t a perfect book, but I did enjoy it. Robin/Janet once said that a book edges into the B range when it is written with flair, and despite its imperfections, I feel that The Danger of Desire has that quality. B-.

→ Janine
Previous article: Agony/Ecstasy Anthology: Jessica Clare and “Bachelorette Party”
Next Post: Who Can Protect The Best Interest of The Reader?