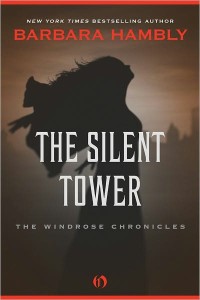 In the discussion of my review of your book “Bride of the Rat God,” lots of our readers chimed in with their favorite Hambly books and with suggestions of what book of yours I might try next. The Windrose series was listed more than once and I added it to my “eventually going to get it” list of books. Then I was contacted by Open Road Media about possibly reading more of your newly available ebooks and when I said, “Sure! And here are some book titles that have been recommended to me” this is the one that was forwarded (thank you very much, Lauren). After checking out some reviews at Amazon and getting a rough idea of the plot, I dove in.

I won’t even attempt to describe the plot but instead will steal the blurb from Open Road Media:

In a world where wizards are relegated to ghettos, it is no surprise to see one murdered in the street. But for Stonne Caris, a young warrior monk who sees the killing and gives chase to the culprit, there is nothing ordinary about seeing a murderer disappear into a black, inky portal. The Archmage sends him in search of Antryg Windrose—a half-mad mage who understands the nature of these passages between dimensions.

On the other side of the Void is Joanna, a programmer as mild as Caris is deadly. She has spent her life in cubicles, staring into computer terminals, as far from heroism as she can get. But when the power that is crossing between dimensions draws her through the Void, she finds herself battling to save a world she never even knew existed.

Okay, so I dive in and almost immediately feel that I’m slightly over my head and at risk of drowning. I think some of my reluctance to read fantasy books stems from the initial feeling I usually get of being totally lost. As the world building is accomplished, I frantically dog paddle around trying to keep everything and everyone straight and oh, lets not forget the plot of the book. Once I know which direction shore is and strike out for it then get my feet under me, I’m okay but those initial “which end is up?” moments frustrate me. Add to this the fact that there is lots of information here that initially seems extraneous and the first 100 or so pages were, let me be honest, a slog. The sections of Joanna in our world were like a much needed oasis to me on a dry journey. The repeated descriptions of the waving grass along the roads and the silent, menacing tower in which Antryg is held seemed on an endless loop. I had to call to mind the number of people who raved about the book to keep going. Sorry, but it’s the truth.

Then I got my bearings and began to get caught up in the story. Things began to seem familiar, facts mentioned earlier came to mind, and your skill in painting another world sucked me in. I also enjoyed the wry, understated touches of humor as our band of enforced companions traveled along, dodging danger and becoming closer even as they, in truth, didn’t entirely trust each other. The gentle unfolding of the romance is almost as light as a butterfly as these two delicately and slowly realize what they feel – and that their feelings might be reciprocated. More of a “coming home” versus a “Hot damn! I’m in lurve!” It also makes sense how it spools out between two people who don’t actually want it, never expected it and have never experienced anything like it before.

And when the betrayals kick in, they’re all the more gut wrenching. Was everything Joanna felt a lie? Can she trust anyone on either world again? And worst of all, is the heartbreaking choice she has to quickly make the right one? Let me tell you I was madly reading at top speed by this point. “Wait! No, that can’t be! Nooooo, tell me it ain’t so. Is this the end? OMG, it’s not.” My kittens were regarding me strangely and no doubt wondering about momma’s sanity.

Some things seem dated and younger readers will no doubt be baffled or charmed by this vision of antique computer technology (Floppy discs! Yes, they were once state of the art. Go look it up.) but I’m perversely glad you didn’t update this. Am I set to immediately start the next book in the series? You betcha! Do I need to wait to do that in order to complete other reading commitments? &^%$#@ it, yes. But I’m caught up in the series now and will be returning to it as soon as I can. B- for the first part, B+ for the rest.