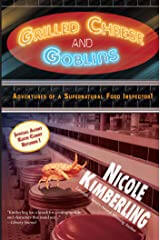 Vampire Hunter. Leprechaun Fighter. Food Inspector. Keith Curry has his work cut out for him. NATO’s Irregulars Affairs Division is a secret organization operating in thousands of cities around the globe. Its agents police relations between the earthly realm and those beyond this world, protecting citizens from both mundane and otherworldly dangers. Former chef turned NIAD food inspector, Special Agent Keith Curry found out about magic the hard way and is now determined to keep dinner safe for everybody. Includes the novellas Cherries Worth Getting, Magically Delicious and the never-before-published Bring Out Your Best plus bonus shorts and more!

Some preliminary stuff – this is partially an ARC review. I say partially because two out of three novellas were published previously in the anthologies, and I bought and read them. In fact, I bought “Cherries Worth Getting” twice – first as part of my favorite m/m anthology ever “Irregulars” and then as a separate e-book story. I also bought the next novella in this book “Magically Delicious” as part of the “Charmed and Dangerous” anthology.

There are also several very short stories in this book, two of them are Christmas codas which the writers of the “Irregulars” anthology used to write as freebies for the holidays for those readers who wanted a quick happy glance at the characters I think. The third short I do not remember reading before.

And the third novella, as the book tells you, was not published previously.

So, for those of you who never read “Irregulars” – go READ that book now. However, you don’t really have to read other stories in that anthology in order to enjoy the adventures of NIAD food inspector Keith Curry and his boyfriend whose name and heritage will remain a secret because the blurb does not talk about him.

The world where Keith Curry lives and works is similar to our world, except all kinds of beings work and live on Earth. Those beings come here through the magical portals from many magical realms and of course all kinds of issues arise that needs to be, I guess, “regulated” is the best word to use here even though NIAD does much more than just regulate.

“The NATO Irregular Affairs Division, often simply called the Irregulars, had been tasked with the duty of policing other-realm traffic, beings and artifacts.
NIAD policed NATO territories, providing justice for the wronged and infrastructure for the hundreds of thousands of unearthy refugees, diaspora and emigres who now lived hidden within NATO Borders.
The array of agents employed by the department included rumped old magicians, witches in business suits, and faerie lawyers as well as wide variety of extra-human consultants. But the people who did most of the work were regular old human agents, like him.”

Normally the cases that Keith investigates involves problems with food. He is a former chef and the reason why NIAD noticed him was because as a chef he accidentally got involve in the cooking of some human meat (dead human body just to be clear, because boy was I squicked the first time I read this story). Moreover, poor Keith even tasted the food while he was cooking it. He did not know what he was cooking and once he realized it, he became vegetarian for life. And after he reported this to the authorities, NIAD agents showed up at his door and recruited him.

It just so happens that the case that Keith investigates in “Cherries Worth Getting” involves cannibalism as well. I should say first and foremost it involved murders, but Keith is trying to figure out which “extra – human” beings may have wanted to eat the remains as well. So basically the main plot of the story is fast-moving adventure which involves magic and murder and food.
Another part of the plot which I thought was meshed very nicely with the adventure story was Keith reconnecting with the old flame, who also worked for NIAD. I said that his name should remain a secret, but I changed my mind. His name is Gunther Heartman and few years ago he and Keith had an affair and then broke up because reasons. I do not think that I will reveal a huge spoiler when I will say that at the end of this story they decide to stay together.

The stories which follow the “Cherries Worth Getting” especially the other two novellas all deal with cases that Keith investigates, but they also move his relationship with Gunther forward and deepen their characterizations. I always like when characters have a lot on their plate, and their personalities are revealed in action so to speak.

After “Cherries Worth Getting” the author treats the readers to the two most adorable Christmas Codas called “The Cookie Jamboree” and “The Little Golden Book of Golden Stories”.

These stories are so short that I really do not want to spoiler anything about them, but I cannot help but share with you some magically animated cookies from “The Cookie Jamboree” because I found them hilarious.

You see Gunther had been hosting Christmas Party for other NIAD agents and some other beings recently relocated from other realms for years and now Keith as a good boyfriend helps him to make cookies.

Only other agents had an idea of what to do with some of those cookies (and yes, there was a reason for that which will remain unnamed).

“Then one of the cookies began to twitch. At first Keith thought it was a trick of the light and shifting parchment paper; then the little guy sat up. It twisted from side to side as if cracking its back.

Keith’s reaction was immediate. He brought the spatula down hard. The gingerbread man caught it, struggling against him with strength and will that should have been impossible in a cookie.

Keith relaxed his grip on the utensil and the gingerbread man shoved the spatula away. It stood up, teetering on its rounded legs. It hopped from the cooling rack to the table, gave Keith the bras d’honneur, then gave Rake a more military salute.”

The “Magically Delicious” novella is the story where Keith has to deal with some pixie dust which affected his boyfriend and other agents in some very unpredictable ways.

We (the readers of this book I mean :)) already know that the cases that Keith investigates should not really be violent, but Keith knows that he has a talent for getting himself in trouble. Not in a sense that the guy is not good at what he does, but that he is unable to stay away when the cases often turn violent and dangerous. I loved him for that though and as I said, Keith is quite competent and he usually manages to get himself out of tough situations by finding unpredictable solutions to the problems he deals with.

On the personal front Keith gets to have more interactions with Gunther’s parents who are very nice people really :).

As you can see I am not grading the stories in this book separately, I decided it would not make much sense, but if I were I would probably lowered the grade for “Magically Delicious” in comparison to other two long novellas. It was lovely and entertaining, but for me it lacked something, I am not even sure what. Extra punch?

The last novella “Bring Out Your Best” to me is the darkest one in this anthology which to me makes perfect sense, because of course in essence NIAD agents in this world deal with the immigrants of all kind and even though the USA in this world is not a complete copy of the real USA, but I got that the echoes of the real world politics may show up in this story.

Don’t get me wrong, it is still a case that Keith investigates first and foremost and Gunther as always plays important role, but for example part of this case are extra humans who had been serving in US military for years, but who are now being discharged because of their heritage. I said that “Magically Delicious” lacked an extra punch for me. This story definitely did not lack anything – I almost teared up reading about Jerry and Annie. Of course, the author gives us a happy ending here and there were no personal issues between Gunther and Keith, but one cannot help but think about our world issues and I thought that was a wonderful thing.

→ Sirius
Previous article: What Janine is Reading and Seeing in the Theater: Fall 2018
Next Post: REVIEW: The Library Book by Susan Orlean