What Janine is Reading and Seeing in the Theater: Fall 2018

Foundryside is the first novel in a new series by Robert Jackson Bennett. Set in a world in which physical objects can be “scrived,” etched with commands that give them magical properties, in a Venice-like city run by four Houses (massive family-owned scriving businesses), the story begins with Sancia Grado’s theft of a magical key. 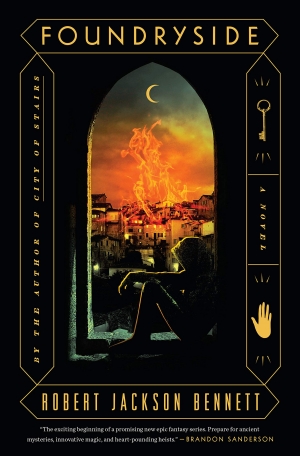 For reasons that become clear later in the book, Sancia, an accomplished thief, has the power to “hear” physical objects to a limited degree. But when she opens the box containing the key in defiance of her fence / partner-in-crime’s instructions, she discovers that she can hold a dialogue with this particular object, and that the key has name, Clef.

Sancia is pursued by Gregor Dandolo, the leader of the watch responsible for the security of the wharf she accidentally torched in the process of stealing Clef. Gregor is a formidable opponent, but Sancia saves his life twice and eventually they decide to join forces to stop a mutual, and more powerful enemy—Sancia’s mystery client for the key.

Orso Ignacio, a scriver who originally purchased the key that Sancia stole, and his assistant Berenice, eventually join Gregor and Sancia’s team, but will they the four of them be able to defeat their mysterious and seemingly all-powerful opponent?

Foundryside is an excellent fantasy novel with a truly different, and fun, magic system. Scriving convinces objects to defy the law of physics by programming them with emotions and drives, and Clef has the ability to talk them into a different way of looking at things. This made for entertaining dialogue.

Sancia is a wonderful character who has been through a lot in her short life. Because she can read anything she touches, she doesn’t dare touch anything, or anyone. She is therefore isolated and dirty (even showers are distressing to her). Hers is a lonely existence, but her defiant strength keeps her and readers from feeling sorry for her.

Gregor is also a great character. Though, as the scion of Dandolo House, he is born to great privilege, he is driven to seek justice. Clef, the wise-cracking and vulnerable key, is lovely, Berenice is appealing, and even Orso has humanity underneath his crabby, obsessive exterior.

The book has a high-stakes conflict which serves as the engine to an exciting plot. There is even a sweet romantic f/f subplot that takes place in between the action. I highly recommend this book to anyone who enjoys reading fantasy. Grade: A-

This is a fun movie with romance and families at its heart. Rachel Chu (Constance Wu), an economics professor, has been dating the gorgeous Nick Young (Henry Golding) for some time. It’s only after Nick convinces Rachel to come with him to his native Singapore for a friend’s wedding that Rachel discovers that Nick is the scion to Singapore’s wealthiest family. 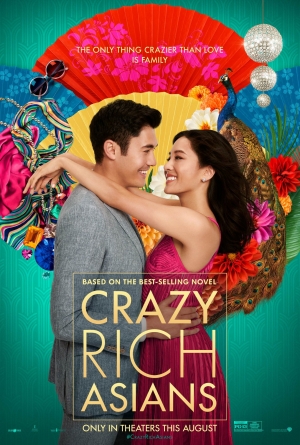 Nick’s mother, most of his relatives, and others in his circle want Nick and Rachel’s relationship to founder. Nick was expected to return to Singapore a year earlier and being working in the family business, but instead he has stayed in New York. His mother fears that if Nick stays with Rachel, he will never come home to Singapore. Others are simply jealous. And then there’s the fact that Rachel was born and raised in the US, and therefore isn’t Chinese enough in their eyes. Rachel has to face some serious obstacles to win her HEA.

Besides this, there’s a subplot about Nick’s sister fashion-icon sister, Astrid (Gemma Chan) and her husband, Michael (Pierre Png). Michael and his family aren’t nearly as wealthy as Astrid’s, and while she hides her expensive purchases from him, he retreats into a corner at family parties rather than deal with her relatives. Eventually, Astrid discovers that he’s also cheating on her.

Crazy Rich Asians is very enjoyable movie and wonderful to look at. The locations are stunning, the costumes terrific (there’s a great analysis of them here), and the food appetizing. In short, it’s a feast for the eyes.

I loved the cast. Constance Wu did a great job of carrying the movie by making Rachel a sympathetic everywoman who finds herself in an almost untenable situation. Henry Golding embodied the dreamboat Nick Young, and Aquafina was funny as hell as Rachel’s best friend, Goh Peik Lin. Several others in the cast were also quite good. But I think my favorite performance in the film may have been that of Michelle Yeoh who played Nick’s mother, Eleanor Sung-Young. Yeoh can say so much with a single look or gesture.

I was engaged by the plot and rooted for Rachel. Though I really liked Henry Golding’s performance, I felt that the role of Nick was underwritten. In a way, the role was a mirror-image of the one female actors often get in dick flicks, that of the love interest / eye candy, without that much development beyond that.

I had an issue or two with the way both storylines, primary and secondary, were ultimately resolved.

I couldn’t buy that Eleanor would give her approval (and her ring) to Rachel, not when Rachel and Nick’s marriage would mean Nick moving to New York. Given how much money was at stake in his taking over the family business, and how long his parents had groomed Nick for this role, it was too big an about-face. Especially when the movie didn’t show us a lot to set up that about-face beforehand. Though the mah jongg scene was perhaps my favorite in the movie, by itself, it wasn’t enough to substantiate Eleanor’s turnaround.

The other thing that I didn’t fully buy was the pat way the subplot about Astrid (Gemma Chan) and her cheating husband, Michael (Pierre Png) was summed up. Yes, once their marriage was on the rocks, Michael cheated. Astrid had a point about him being a coward and not fighting for their marriage hard enough. But I didn’t really see Astrid fighting for Michael, either, and given what assholes her family members were to him, I had some sympathy for his situation. I thought there was more complexity there than the movie acknowledged. To make such a marriage work, Michael and Astrid should have moved far from her family, and why they never did isn’t answered in the film.

Late in September, I saw Colette. The director and co-writer of the film, Wash Westmoreland, was present at the screening and did a Q&A with the audience afterward. He said it took 17 years (a third of his life!) to get this movie made.

The movie is about the early years and first marriage of the French author Colette, a distinguished woman of letters who wrote Gigi, among other books. Colette’s is a fascinating true story and the film takes place in the Fin de Siecle period (roughly from 1890 to 1910). 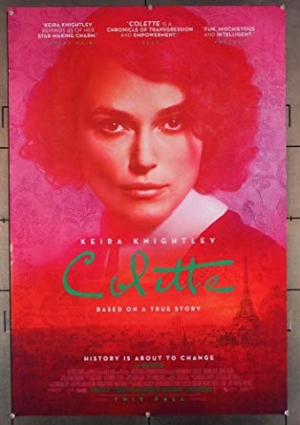 Colette (Keira Knightley) marries Willy (Dominic West), an older man and a writer who essentially employs other writers to ghost write for him. Willy gets Colette to write him a manuscript based on her schoolgirl days, but then the tells her it’s not publishable. Eventually, when their furniture is taken away by bill collectors and they’re faced with penury, Willy publishes her manuscript, Claudine, after all—under his own name.

Claudine and its sequels go on to become the only books bearing Willy’s name which sell like hotcakes. This creates some friction in Willy and Colette’s marriage, as does Willy’s philandering—or more accurately, his lying to her about it. Colette does not have as much of a problem with the sleeping around itself; for her, the cover up is worse than the crime.

Colette herself is a sexual free spirit and as Willy doesn’t look at her sleeping with women as an infidelity (he will not entertain the idea of her with a man, however), theirs could be said to be an open marriage. They even have a love affair with the same woman, separately.

When the ghost-written Claudine novels become huge bestsellers, Willy becomes the toast of Paris, with only a few people guessing that it’s really Colette that is behind his success. Of course, he is happy to take all the credit for her work.

Colette is not a traditional biopic—instead it focuses on the beginning, middle and end of Colette’s first marriage, and on her awakening to both her writing ability and her sexuality.

This was a really enjoyable movie and Knightley and West do good work in it. I was impressed with Dominic West especially, because, as director Wash Westmoreland said afterward, he imbues Willy with a great deal of charm, so that even though Willy is the antagonist of the story, you can understand why Colette puts up with his shenanigans for so long.

While Colette’s character is truly inspiring in her self-possession, self-knowledge and honesty about who she is, and Knightley has both the acting ability and screen charisma to carry this off, I found Willy the more fascinating precisely because he was less honest with himself and others.

Colette brings turn of the century France to life with its authentic costumes and sets, and the cinematographer gives the film a warm color palette that fits with its vibrant and occasionally arch tone.

Colette’s choices would be at the forefront of social change even today–she becomes involved in a romantic and sexual relationship with the genderqueer Missy (Denise Gough), performs a play partially nude, and refuses to bow to the patriarchy.

Willy is without a doubt the villain of this piece, but what a delicious villain he is. It is easy to be infuriated by him (for example there’s a scene in which he locks his wife in a room in order to force her to write) but West makes him so recognizable and at times, appealing, that despite his loathsome actions, it’s hard to loathe him.

It is interesting that though it is set in France, the movie itself was made in English, and *NOT* dubbed or in French with subtitles. Grade: B+.