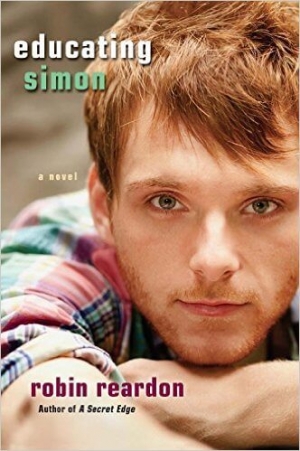 Everything sixteen-year-old Simon Fitzroy-Hunt loves is in England. There’s his school, his boyfriend, his cat, and especially Oxford University, which Simon plans to attend just as his beloved late father planned. But all of Simon’s certainties come crashing down when his mother remarries and drags him to Boston with her.

Furious and unforgiving, Simon finds plenty to resent in America. His stepsister, Persie, is overindulged by her father and struggling with Asperger syndrome. And Simon’s school project–coaching a young student for the national Spelling Bee–hits a complication when eleven-year-old Toby makes a confession: there’s a girl trapped inside his body, and her name is Kay.

Helping Kay find her way begins changing Simon too, opening him to different perspectives, revealing a strength that’s gone untapped until now. And as the life he’s known and the future he envisioned slip further away each day, he realizes he can either lose his direction entirely or forge a new–and perhaps even better–path.

I needed satisfying coming of age story and I saw that you had a new book out last year, so I bought it. The story deals with a teenager feeling sorry for himself, being selfish but slowly growing out of it, and growing up a lot during the course of the story, so beware – if you do not enjoy reading about teenagers acting the way teenagers often do, I would advise against reading this one.

Simon’s mother remarries and decides to move to America, and even though Simon really does not want to go, he has no choice. Simon is dead set on going to Oxford a year later; he is very intelligent, but also not very sociable and quite self-absorbed. He also has a condition called synaesthesia. Of course he does not want to go to Boston and of course he is only thinking about himself and does not see anything else at first, but I really related to him – moving to another country can be a tough experience and I felt bad for Simon.

Feeling bad for Simon (especially since he had to give up the cat he loved so much) did not preclude me from rolling my eyes at him for failing to realize how very privileged he was and how much his stepfather bent over backwards in order to get him in a school which would help him to prepare for Oxford in the best way possible.
Simon was not a bad person though, when he was pushed by his school advisor to start coaching Toby for spelling competition, he seemed to show a lot of empathy, especially when Toby confessed that she was really a girl and her name was Kay. I really liked that right from the beginning Simon was honest with himself that he did not know a lot about being transgender, but he went above and beyond to help Kay to prepare for the competition, and he also helped her in other ways. I thought theirs was one of the sweetest friendships I read about lately.

“Before I left we exchanged Christmas gifts. She gave me a book on Scottish fold cats, beautifully photographed. I gave her something that sent her positively over the moon: a single strand of black pearls. She shrieked; she cried; she bounced; she nearly swooned. I think the pearls were a hit.”

As I said, Simon is extremely intelligent and I enjoyed reading how he was getting more and more insight into himself as the book progressed.

“When I started, I really needed to “talk” about things; no friends, crisis after crisis (real or manufactured), and some odd combination of unfulfilled romance and fulfilled sex. Now my life is mostly about that one-foot-in-front-of-the-other labyrinth pattern with very few things to trip me up. Though, of course, schoolwork is a constant demand; I have to keep my marks up or lose Oxford again, and I will not let that happen.”

What I also really liked is that even though Simon grew up and learned a lot of stuff about himself and showed his best qualities to the world (I am not sure if I want to say that he became a better person, I felt like he always had those qualities, just did not show them much), his desires and his wishes are validated too. Of course Simon did not think much about how hard this move to America was for his mother and why her new husband really could not move to England, and even though they did their best to help him follow his dreams to go Oxford a year later, they did not handle the move to Boston in the best way. I was afraid that once Simon would have to go to an American school even only for one year, his dream of Oxford would be out of reach, so I was happy that this did not happen and he gets to “come home”. He may miss his family and visit them, but his home was in London in the beginning of the story and it is still his home at the end.

“Hadn’t this move to Boston been a really good thing for me, after all? Hadn’t I changed for the better in so many ways? Didn’t I like myself so much better now? Didn’t other people like me when almost no one had before?
Boston had been a big win for me. Whatever else happened, nothing could take that away. I am my own person now. The spell? The one I’d told Ned had been cast upon me? The spell was broken. And now that I know who I am, I’m ready to be who I am.
I opened the envelope. Pembroke. Black, lilac, brick red, sky blue, bright red, terra cotta, hot pink, lilac.
They accepted me.
I kneeled by the side of the bed, leaned my arms on the mattress and wept for joy. I was going home.”

Simon is gay, but the book is not a romance – we seen him trying to enter the dating scene, but that storyline does not have a resolution. But because Simon is seventeen when the book ends and he’s going away to Oxford, it made perfect sense to me.