REVIEW: Bite Me by Christopher Moore 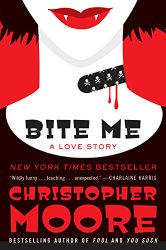 “The city of San Francisco is being stalked by a huge shaved vampyre cat named Chet, and only I, Abby Normal, emergency back-up mistress of the great Bay Area night, and my mangahaired love monkey, Foo Dog, stand between the ravenous monster and a bloody massacre of the general public.”

Whoa. And this is a love story? Yup. See, while some lovers were born to run, Jody and Tommy were born to bite. Well, reborn, that is, now that they’re vampires. Good thing theirs is an undying love, since they’re imprisoned in a bronze statue. Their Goth Girl Friday, Abby Normal, wants to be a bloodsucking fiend, too, but right now she’s really busy with other stuff like Chet, who’s getting bigger and smarter—and thirstier—by the minute.

Before you can say “OMG! WTF?” Tommy and Jody are sprung from captivity, and join forces with Abby and the entire crew to hunt big cat and save the city. And that’s when the fun really begins.

It’s been a while since I read “You Suck,”second book in this series so Abby’s first chapter recap and second chapter quiz came in very helpful for getting me back up to speed. We are once again in a “San Francisco” bursting at the seams with vampires, coPs, vampire minions and wannabes, the Animals plus the Emperor and his Men. Can they save the city – again? Fucksocks.

Vampyre kitties! And vampyre rats! I had hoped to see these going together like chocolate and peanut butter but alas, twas not to be. Instead the rats stay (mainly) in their cages at the Love Lair maintained for the Countess Jody and Dark Lord Flood by Abby and her manga-haired love monkey Steve – Foo – Wong as he desperately works on the serum needed to turn Tommy back to human (as he’d done for the Animals at the end of “You Suck”) and later Abby, once she’d self achieved (I’m all like “whoa, how amazing is that!”) her greatest desire. And Abby even passed her science class. But what of Jared?

“Ace is the place with the helpful hardware man.” Hahaha but I’ll bet the Ace people never counted on Abby needing their “open all night” Castro store for all her hacksaw, chisel and Shop Vac needs. Good thing Bob the Gay Builder is there for her and volunteering to party with her or shop afterwards. This book is so totally not culturally or ethnically or anythingly sensitive but everyone got super soaked that way so, no favorites. There is also a ton of fuzzy science that lets you get away with a lot of shit and out of any painted into corners. Very handy.

Kayso, a lot of weird went into this book and given all that happened in the first two, things got ramped up to super wild OTFT as old vamps and new – including the above mentioned cats and rats – cops, Safeway stockers and a boss Japanese woodcut artist with major katana skills met in a dazzling conclusion to the vampyre series – though from what I’ve read of “Secondhand Souls” old friends are still in (your) San Francisco and maybe the passenger of the Raven might appear again (I’m hoping). I’m kind of sad about a few things, curious about some things left open ended but I’m not frustrated or mad. All good things and series must come to an end and I think this one managed entertainment without shark jumping. It doesn’t completely rock my stripy socks but it doesn’t make me spaz hurl either. B