REVIEW: Rolling in the Deep by Rebecca Rogers Maher

JayneB- ReviewsContemporary / friends-to-lovers / novella / rags-to-richesComments Off on REVIEW: Rolling in the Deep by Rebecca Rogers Maher 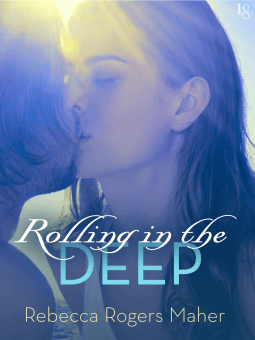 Holly Ward is stretched to the breaking point, raising her young son alone and working long hours for minimum wage at a local superstore. Sure, she’s noticed the new guy with the easy grin and warm brown eyes, but she’s learned the hard way that relationships aren’t worth the pain. Still, when he invites her to split a lottery ticket, she figures a little innocent fun couldn’t hurt. The last thing she expects is to score big, which is exactly what happens . . . in more ways than one.

From the moment he meets Holly, Ray Lopez is drawn to her quiet dignity and openhearted beauty. And when they hit the jackpot together, he’s thrilled that the single mom can give her kid a better life. The only problem is the chaos surrounding them: lawyers and reporters swarming, friends and family angling to get their cut. In all the chaos, Ray discovers an oasis of calm and passion in Holly. But with the stakes higher than ever, winning her trust could cost him everything.

Who hasn’t seen the latest powerball total and daydreamed about winning? What would I do? What would I buy? OMG, my worries would be over. Right? Of course the dark side is how much a person’s life changes, whether or not they want it to.

From the beginning, the characterization of Ray and Holly is vivid and realistic. I can see this tired, worn, slightly frayed at the edges woman trying to make it another week. There are bills to pay, a dead end and thankless job that sucks her soul out a bit each day and a juggling act to perform in raising her son on so little when her ex has married money and can offer so much more materially to Drew. She is the working poor of this nation. But then so is Ray. His widowed mother worked herself to death to provide for her sons and wanted so much more for them than she had.

They’ve eyed each other a little in the chain store where they both work but not taken it further. One day a little lighthearted flirting and bantering leads to a suggestion to buy a lottery ticket. $2.00. What can it hurt? They might even win. Yeah, right. But then they do and life flips upside down.

Even with the Powerball testimonials to warn them, the dark side of winning rears its ugly head and before they even get the money deposited (lump sum payout as their separate lawyers advised them) reporters are hounding them and friends are acting differently. Their romance, which wasn’t past the baby steps phase, is up against the wall now.

Like I said, I love the characters of Holly and Ray. They are spot on believable. I adore Holly’s relationship with her charmer of a son Drew who is still in the stage where he doesn’t mind hugs in public. Ray and his brother Tony also have the brother thing down pat. Holly’s best friend Beth is a hoot and looks like she’ll help Holly enjoy her money.

What brings the grade down a bit is the draggy part between winning the money and sorting their romance. Their worries over starting a relationship in this limbo stage meandered a bit. They do talk and worry a lot about whether or not what they feel is real or just do to the situation and them being the only other people to understand what they’re going through. But I didn’t really get that they’d worked it out for real by the time the page count was up. I did like how something so easy but also so simple helps fix Holly’s issues with her ex.

So kudos for two nice people who I can picture down to their socks who get a chance to make all their dreams come true. But I think there’s either too many plot variables or too little time in order to successfully resolve everything by the end. B-