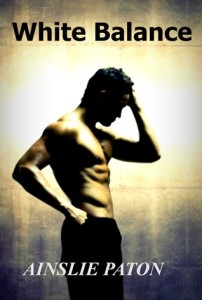 This is the third full length Patton novel I’ve read and I’ve come to the realization that none of these are end of the day, easy reading. This one took me a weekend and I thoroughly enjoyed being drawn through the story at a more leisurely pace.  Ordinarily, I burn through books like a flame eating up dried kindling.  As I thought about what I would write in a review about this book, I was reminded of the old Harlequin Superromances written by Judith Duncan and the like. Those books clocked in close to 100,000 words or more and were often more than *just* the romance but explorations of human interactions.

White Balance is, at least, a cousin to those wonderful HSRs of old.  Aiden lost his true love eighteen months ago and it’s changed him.  He gets up and goes to work but his creative juices are dead and he’s turned into a surly, angry manager of people.  His world is colorless and his outlook is bleak.  He hasn’t touched her stuff. He’s allowed his mansion to turn into a trash pit.  He snarls at his friends and other than work, all he can do is mourn.

Aiden’s grief is so real and palpable that you wonder how it is he’ll ever be able to fall in love with another woman and will I, the reader, believe in the connection between Aiden and the female protagonist.

Bailey is a photographer and big time events producer.  Her latest project was for the Federal Ministry of Energy to tout their new green plan. Only the hotel suffers a massive power outage at a key moment and Bailey becomes the scapegoat.  Hurting and out of a job, Bailey is ripe for a job offer from her friend, Blake.

Blake has a plan to make a ton of money in 5 years and then sell out to pursue his dream of doing nothing but chasing his wife, Olivia, around the house.  In order to pull off this plan, Blake needs his two best friends–Aiden, a shark who can manage people and make a deal, and Bailey, who turns ideas into magic.

The story explores the issues of grief, what-ifs, and even misogyny although the latter only tangentially through the lenses of Aiden, Blake and Bailey. Each main character is fully realized.  Aiden is not just the gruff widow but he’s an insightful manager of people.  Blake is an idea man, a charmer, but even he acknowledges that without people like Aiden and Bailey, his ideas are merely that – ideas.  Bailey crushed on Blake for a long time and maybe it was the fact that his star rose, lofted by her hard work, while hers languished that slowly killed her feelings but she has nothing but friendly affection for him.

When Blake, Aiden and Bailey start out on their new venture, Bailey is treated as the outsider by Blake and Aiden.  Initially Bailey looks at Aiden as an asshole extraordaire until she gets a glimpse at his grief.  And then she realizes that he values and acknowledges her work in ways that Blake never had.

There are a number of tertiary characters who were important to Aiden’s life but had unnecessary points of view, in my opinion.  Before his wife’s death, Aiden and his wife had signed up for the Big Brother program. Aiden attempts to terminate the relationship but faced with Cody, a troubled fatherless thief, Aiden finds himself helping Cody.  Cody and his sister make Aiden realize that perhaps his heart hasn’t died, it’s just dormant. I liked that it was a number of things that sprung Aiden from his grief and not just Bailey.  It made his recovery believable.

What Bailey and Aiden don’t know is that they are linked together by Bailey’s blog. Each day she posts a picture and often Aiden posts a comment.  Sometimes it is poetry. Sometimes just a sage saying.  Bailey looks forward to MacGuffin’s comments and some days it is only the curiosity of what White Balance will be posting that gets Aiden out of bed.

I was less certain about what Bailey’s character arc was other than she learned to stop putting up with the bullshit from people in her life, particularly Blake. In many ways Blake is the villain of this piece although he doesn’t mean to be.  But something Olivia, his wife says, puts him on edge around Bailey for the entirety of the book and makes him treat her poorly time and again, even though he admires her.  This Blake -> Olivia -> Bailey storyline was fascinating and one that intrigued me almost as much as Aiden’s grief recovery.

This is a romance but it’s more and not just because of the density of the storytelling. I do think that there were areas that could have been pruned, but I also appreciated how deeply into the psyche of the characters I was drawn.  I’ll remember Aiden and Bailey for a while which is more than I can say for other books I’ve read of late. B

→ Jane
Previous article: REVIEW: Freefall by Tess Oliver
Next Post: The Resurrection of the Fan Culture. Is there room for both of us?