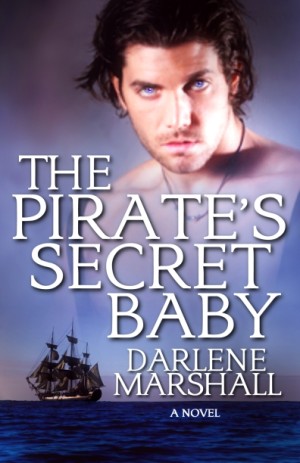 “The captain of the Prodigal Son has a deserved reputation as the deadliest (and best dressed) pirate in the Caribbean, but Robert St. Armand’s totally at sea when it comes to “Marauding Mattie,” the daughter he never knew he had. How in the world can he deal with the littlest pirate, one who prefers knife-throwing to arithmetic lessons, and who’d rather be keelhauled than eat her beets? He needs help!

Lydia Burke is living a safe, respectable life, separated from England by an entire ocean. It’s exactly what she needs and she’s not going to risk her boring, but secure, position as a governess to consort with pirates, especially one who’s too pretty for his own good or her peace of mind.

No self-respecting governess would be willing to come aboard the notorious Prodigal Son, but Robert didn’t fight his way to the top by letting small obstacles like scruples stop him. If he can’t hire Lydia Burke, he’ll steal her and take her to England with them, certain he can charm her into his bed along the way as an added bonus on the voyage.

It will be a true voyage of discovery for the pirate and the governess, as one learns to navigate the rocky shoals of parenthood while the other tries to keep deadly secrets hidden, and both will find that while it’s a child who initially brings them together, the growing passion between them offers the greatest temptation.”

I’ve been eagerly waiting for your next book. Given the title – and I love the title and its play on the ubiquitous romance book trope – I knew it was going to be fun. Pirates, a shipboard romance, a new father upended by his unexpected responsibilities and a woman who manages to keep her head and agency? Sign me up, Captain.

Even though this story ends up in England on a country estate, I think it would work for people looking for a non-Regency historical. I would love for the action to have stayed longer in the Caribbean but the abundance of shipboard time makes up for that. Throw in the fact that no time is spent in London, or at Almacks, and that Robert schools his young daughter in knife throwing and the rules of survival in a fight –

“What did I tell you is the first rule of knife fights?”

“Kill your enemy from a distance and avoid knife fights.”

– much to Lydia’s despair, and it’s a horse of a different color. Okay so maybe Robert’s rules aren’t what most young women of the age were taught but he’s making sure his daughter will be able to defend herself, if need be.

“Mattie, what did I teach you about socializing with strangers?”

“Be courteous to all you meet, but have a plan to kill them,” the child said skipping along and holding his hand. “Can I get a puppy first?”

“Captain St. Armand! You cannot teach the child such awful things, especially now that we are back in England!”

Robert is a fellow who is cheerfully and unrepentantly out for what he wants and he’ll manipulate – though he prefers the word persuade – everyone to go along with him. Throughout the book, his basic modus operandi doesn’t change that much. It’s more what he wants that causes change in him. His response is pretty much the same. He was a take-no-prisoners pirate who would kill if need be but also a captain who saw to his crew and his ship. He also uses his mind to out think possible enemies at sea if possible. On land, he takes on the responsibilities of seeing to the manor house, land and people under his care.

I was a little disappointed about Robert’s reasons for falling for Lydia. I know that “she’s different and she won’t (sexually) give in” are RL relationship starters – I know a friend whose first husband felt this way – but I guess I just want more from Robert. I wanted him to realize how special Lydia is early on rather than be piqued that he can’t get into her drawers. Still once he starts to fall, he quickly realizes that she is special, even before the fun starts with the scarves, feathers and other toys Lydia keeps for her own sexual gratification.

For me to enjoy them, historicals have to eventually reach a point where the hero and heroine have a balance of power. I needed to feel that Lydia could hold her own and had some agency, despite being on a ship run by Robert. I was delighted that Lydia is shown as an intelligent woman and one who is respected for that. She enjoys and is good at math and seeing the same in Mattie, Lydia has encouraged Mattie’s mind. Kudos to Robert for wanting the same thing. Lydia holds out for what she wants and ends up setting the sexual terms and limits of their relationship, then begins to actually lead the game.

Mathilde, or “Marauding Mattie” as she likes to be called, is far more than a plot moppet. She’s a fully realized character who acts like a child would, albeit a maths smart, slightly bloodthirsty 8 year old child. I foresee a book for her and heaven help her hero. She gives Robert plenty of chances to experience the delights and terrors of fatherhood. My one disappointment is that her character does fade a touch into the background once everyone reaches Robert’s house in England.

Though the book appears to be well researched, it flirts with the limits of social mores of the 1820s. Lydia and Robert are well aware of the need to protect Lydia’s reputation from gossip once they arrive in England but they come close to arousing suspicions a time or two. Luckily they pull up short of anything that might have got the old biddies of the village started as there is only so much flouting I could have believed in. The story shows a slightly “Vaseline on the lens” view of pirates and piracy but I enjoyed the crew rallying behind Mattie and Lydia so much that I could overlook that.

Overall, this is a welcome addition to your 19th century pirates oeuvre. Maybe it’s a little bit too democratic for England of the age but that section doesn’t last long and Robert isn’t the typical aristocrat. With its smart and sexually aware heroine who has reached for the gusto she wants in life – both then and now – and delightfully self assured hero – he knows which angles and fabrics flatter him – plus a pint sized dynamo just begging for her own story to be told, I had a great fun reading it. B