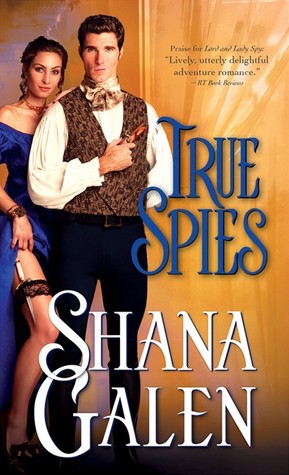 I love Regency-era romances – love them dearly.  There’s something about the pomp and circumstance, the dire-ness of rules for women and the sheer insanity of the social strictures of the time that alternately makes me want to visit there for a day and sends me screaming for my modern conveniences and right to vote.  I don’t think I could stand visiting for any longer than a day, maybe two – if the smells and crush of the routs didn’t get me first, a runaway carriage in the streets would.  While there’s something to be said for the life of a female member of the ton – the parties, the preparation, the running of households, the at-homes – there’s also a lot to be desired, particularly when one’s husband is noticeably absent on a regular basis.

Genteel Elinor, Lady Keating, is a woman who appears to have it all.  She’s married to a peer, has two beautiful, healthy daughters, has a plethora of friends and is seen as one of the most organized hostesses in town.  There’s very little she doesn’t have – save for the attentions of her all-too-busy husband, a man who is kept out of town more often than not by business on his other estates.  Winn, Lord Keating, is a man of many secrets.  Having wed Elinor for propriety, he found himself free to pursue his life-long passion – working for the Crown as a spy.  As a peer, he’s perfectly situated to move amongst others of his ilk who may, or may not, be assisting the French cause.  Winn’s well-ordered world is turned quite on its head when his quiet wife decides she’s had enough of his excuses and is tired of waiting for him to love her.  Their two separate worlds are no longer enough.  He must find a way to woo the woman he loves back – before she’s taken from him.

There’s quite a lot to be said for authors who can take an idea from a movie and mold it into a lovely, occasionally humorous escapist read in a genre light-years from its origination.  As the title of the book suggests, the story riffs off the movie “True Lies,” starring Arnold Schwarzeneger and Jamie Lee Curtis as a married couple who are just going through the motions until a considered affair and treachery collide in an explosion whose fallout rivals that of a bomb.  One thing I truly loved about this book was the fact it flew in the “traditional” tendency of Regency romances to portray the heroine as an outcast of sorts who excels in not-traditional realms – whether it be academics, botany, sciences or martial prowess.  Elinor is powerful – she’s a master of what are considered the feminine arts of home and hearth.  But rather than that detracting from her appeal, it enhances it.  Here is a woman who has done everything society has demanded of her, enjoyed it, and excelled at it – and she’s meeting a new challenge head on.  Of course there are second thoughts and pitfalls when Elinor is forced to join Winn in the spy game – she doesn’t suddenly become super woman just because her husband is taking more notice of her.  It was handled, well, realistically for a fiction novel that borrowed heavily from a big budget Hollywood action film.

I found a certain sweetness to the romance between the two main characters as well as their interactions with friends and relatives.  At times, it was a touch of “Real Housewives” (or maybe “Cougar Town” given that Elinor was being thrown at a fairly young man by her friends) mixed with the usual tongue in cheek humor used to lampoon the upper class.  But, despite the occasional biting wit, it maintained plausibility and held up well under scrutiny as both action AND romance, something that cannot be said for many books.  I particularly enjoyed the visit back to characters from the previous book, “Lord and Lady Spy,” the first in the same-titled series.  It added a bit of continuity for flavor, and gives the reader a chance to see where previous characters have gone. B-