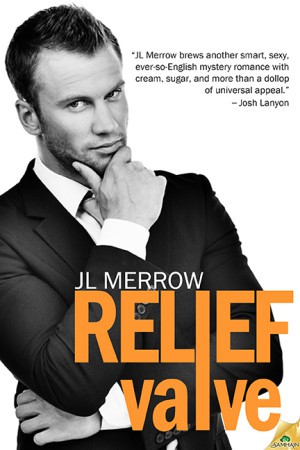 I’m a fan of your books (although I haven’t read them all), I enjoy your humour and writing style and I liked Pressure Head very much.  So I expected to like Relief Valve.  Unfortunately, the romance felt underrepresented in the story and I didn’t get to know Phil better as I’d been hoping to do.  While I still enjoyed it overall, it wasn’t a book which compelled me to keep reading.  That said, the back half of the story was better for me – mainly because it contained more meaningful interaction between Tom and Phil.

While I think Relief Valve could be read as a stand-alone (in theory) I recommend readers start at the beginning.  There isn’t a lot of revision in this book and even though I’d read Pressure Head, I found myself a little lost at times, trying to remember what had happened in the earlier book.

Tom Paretski is a plumber who lives in St. Albans in Hertfordshire, to the  north of London. He was the younger “surprise” child of his parents; his brother and sister quite a bit older than he.  When he was 17, Tom was hit by a car when he was running away from some high school bullies. He spent a lot of time in hospital being put back together and didn’t end up going back to school. He is mostly okay now but his hip, with its pins and screws still gives him grief from time to time.

Phil Morrison is a private detective and he was also one of the bullies that chased Tom that day so they have history.  How they move from mistrust and dislike to attraction, forgiveness and a relationship is covered in the first book.

Tom has a “talent” for finding hidden things.  It makes him a very good plumber because he can find a leak in a pipe behind a wall in no time at all with pinpoint accuracy.  It also means that his friend Detective Dave Southgate sometimes asks him to help out in cases regarding missing people and property.   As Relief Valve starts, Tom and Phil have begun to settle into a relationship.  Tom is still a bit uncertain and he finds Phil hard to read.  This made it a little difficult for me as reader, because the story is told from Tom’s first person point of view.  In the first half of the book in particular, Phil doesn’t talk much (not that he gets garrulous by the end, he just talks more later) and, if anything, I found Phil more opaque than he was in the first book.  I had hoped to get more insight into his character in this book but in some ways I felt I knew him less well at the end.

Tom gets a call from his older sister Cherry, with whom he hasn’t spoken in a while.  She is a lawyer and is the executor of the will of a former neighbour who has left an odd bequest to Tom.  He has to use his “talent” to find the codicil to his “Auntie Lol’s” will.  When he meets with Cherry, she also tells him she’s getting engaged and invites Tom and Phil to her engagement party.  Gregory Titmus, Cherry’s fiance,  is a canon of the Church of England and a rather… unusual character.    Cherry collapses at the party and only emergency treatment saves her life.  When it becomes clear that Cherry has been poisoned, Tom and Phil (and the police, via Detective Southgate)  investigate to find out whodunnit.

In the meantime, Tom’s best mate, Gary (who is a gay man of the more flaming variety) is planning his wedding to the love of his life Darren (who is an ex-porn star dwarf).  Darren is not merely a prop or a caricature played for laughs.  He is a vibrant character who kind of takes over whenever he’s on page.  He’s pugnacious and kind of in-your-face  (he’s 4’6″ but always calls Tom – who is not tall – “shortarse” or names in that vein) and he is also deeply in love with Gary and very protective of him.  (Also, Darren’s former porn antics come in handy for Tom later in the book when he’s put on the spot at a meeting of the local literary society.)

Tom has a self-deprecating and dry wit which makes him an entertaining narrator.

Gregory guffawed. Seriously. I’d always wondered what a guffaw would sound like, and now I felt a gentle pang of nostalgia for my lost ignorance.

I mostly enjoyed the humour but there were times I felt it palled because I was longing for some further depth/insight into the relationship between Tom and Phil.  In some ways I felt the story manufactured conflict between them in the way that seemed incongruous to what I remembered of their status at the end of the first book.  At the start of Relief Valve, things seem uncertain between them but nothing untoward has actually happened.  I think it was a deliberate decision to save the sex scenes for later in the book and merely mention in suggestive phrases that they were getting it on regularly, but that added to the sense that all was not well – I didn’t see intimacy and I missed it.  Intimacy is what I’m after in a romance.  It often is displayed in sex scenes but it doesn’t have to be. Some of the most romantic books I have read have been closed-bedroom-door books.  But in the first part of Relief Valve in particular, that intimacy was lacking (perhaps deliberately?) and I was doubting the relationship.  In the second half, things picked up and I got some of that intimacy I was after (and sex scenes too) but it still wasn’t enough to really satisfy.

The mystery has a few red herrings, some of which I felt were a little clumsy and strange and generally, I found this aspect a little less engrossing than the first book.  That said, I’m not a big mystery reader (I’m hopeless at solving the puzzles and I’m suspicious of everything and everyone in a vain attempt to work out the guilty party before the big reveal.)  I think if a reader were to approach the book as a mystery with some comedic aspects and a slow building romantic arc too, it might be more successful than it was for me, who read it mainly for the romance.

I do still plan to read the next book in the series – revelations about Tom’s history made late in the book will tempt me back, and, when I get it, I love Tom’s and Phil’s dynamic.  I enjoy the secondary cast very much.  They are quirky and individual and well developed (which makes Phil’s character all the more frustrating for me). But, I’m really hoping that in the next instalment we find out more about Phil and get further insight into him.  I liked Relief Valve but I wish I’d loved it.  Grade: C+