“Peek-a-boo I see you…
When five-year-old Helen Stephens witnesses her mother’s murder, her whole world comes crumbling down. Rejected by her extended family, Helen is handed over to child services and learns to trust no-one but herself. Twenty years later, her mother’s killer is let out of jail, and Helen swears vengeance.

Jason Moody runs a halfway house, desperate to distance himself from his father’s gangster dealings. But when Helen shows up on his doorstep, he decides to dig into her past, and risks upsetting some very dangerous people.

As Helen begins to question what really happened to her mother, Jason is determined to protect her. But Helen is getting too close to someone who’ll stop at nothing to keep the truth hidden …”

I hadn’t read a mystery/thriller in a while so I was primed when Choc Lit offered me the arc of this book. “Who,” I thought, “is the elephant girl and why is she called this?” It took a chapter or so but soon I realized that Helen = Ganesh – the bringer of justice – and she is the one who will see that the her mother’s murderer will pay for not only the death 20 years ago but also the horrid life Helen was forced into as a child. 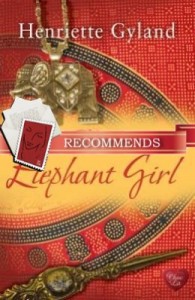 I love watching RL cold case and forensics shows and remember what a detective on one of them once said. Be careful about investigating the dead. All kinds of things can be uncovered that you might not wish to know. People aren’t always who you thought they were – this counts for almost everyone in the book – and have motives you might never have imagined.

Both Jason and Helen act as products of their environments and upbringing. Helen is skittish about getting emotionally close to anyone due to her relationship – or lack of one – with her step-family who she feels abandoned her as a 5 year old to foster care and because of peoples’ reaction to her epilepsy – which hasn’t always been kind or understanding. Jason’s father has kept tabs on him and interfered in his life since childhood including a spectacular f-up with a former girlfriend. Jason takes considerable pleasure in rubbing his religious Catholic father’s face in the unintended outcome of that. Since then, Jason has taken care to stay clear of his father and try to limit the paternal access to his private life.

Neither of them is crazy about falling into any kind of relationship, much less love, and they fight it all the way. In a strange way, this ultimately helps convince me that when they finally do own up to their feelings, the feelings are genuine ones.

The story is mix of mystery – who killed Helen’s mother, thriller – will they try and kill Helen now that she’s stirring up shit, and redemption – of the family Helen feels rejected her and the group staying at Jason’s halfway house and absolution. The group members don’t quite turn into a ‘rag-tag’ band out to save the world but it’s nice to see each person contribute something unique to solving the crime.

There are lots of red herrings swimming around in this novel to muddy the waters but it’s also very much a “characterization” novel. Yes, it’s about events that happened, discovering the truth and dishing up justice but deeply about the people involved. Not all of them are initially – or even ultimately – likable but they are drawn well and most show growth and change as bits and pieces of the truth finally see the light of day.

“The Elephant Girl” has an emotionally satisfying, if very dramatic, ending with the villain literally being served justice because of their own actions. Karma’s a bitch even if the reader gets a hefty dose of villain exposition beforehand. I enjoyed “The Elephant Girl” and getting something a little different from the usual English Chick Lit style novel I seem to be addicted to. B