When I requested this book, I wasn’t aware that it was a novella (I rarely read novellas). I wasn’t put out to discover that it was shorter than the average book, but I did come to feel that it might have worked better in a longer format. 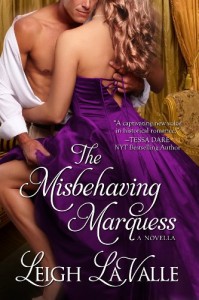 Catherine Raybourne, the Marchioness of Forster, enters the library of her quiet country home in Nottinghamshire one Wednesday afternoon in 1821, and is shocked to find an unexpected visitor. Actually, he’s not a visitor at all, per se – he’s her husband Jamie, whom she hasn’t seen for five years.

Catherine and Jamie married young, and it was apparently a love match – they were neighbors and sweethearts prior to the marriage. But only a short time into the marriage, Catherine does something that causes Jamie to feel that he’s been humiliated by her in front of society, and storms off in high dudgeon.

Part of the problem I had with The Misbehaving Marquess was that I was never that clear on the nature of Cat’s supposed transgression. Apparently her actions were detailed in an earlier book, The Runaway Countess. My understanding is that she was seen in intimate conversation with a notorious rake, an action she undertook solely to help the heroine of that book.

My sympathy for Jamie was pretty thin to start with, but the fact that he left his wife not so much because he *really* believed that she cheated on him, but because he’s pissed that she embarrassed him by giving that impression to the ton, made him quite unlikable in my eyes.

Jamie has been traveling the world, having all sorts of adventures in far-flung locales, with apparently little thought given to the wife he’s left moldering in the country. Now he’s back, and rather predictably, has decided he wants an heir. Cat is thinking that she wants an annulment instead.

I happen to have read at least a few books with similar themes in the past year or so. On the surface, estranged couple stories have a lot of potential for a reader like me, who likes her angst. But they require delicate handling, in my opinion, to be successful. There needs to be a good reason for the estrangement – no big misunderstandings that keep a couple apart for years. Both parties need to be at fault to some degree (or I’m going to expect a lot of groveling from the main offender, who, let’s face it, is usually the husband). If the characters have behaved stupidly and/or immaturely, I want that to be tied to something in their character, something in their past – something that they presumably are working on fixing or have fixed.

So, I kind of have a lot of rules for these types of stories, and these books I’ve read in the past year have not satisfied these rules, nor does The Misbehaving Marquess. In spite of the title, there’s little acknowledgment, at least until the end of the book (and then not enough, IMO) that Jamie is pretty much 99% responsible for the estrangement with Cat. He makes it clear that his concerns were all about being made to look like a fool to society, which I don’t think is a good reason to desert your wife, whom you supposedly love, for five long years. There’s no backstory that explains why the opinions of others matters so much to Jamie, more than the happiness of his wife. All I could assume was that Jamie was very immature when they married. Well, okay. But the fact that he gets to run off and play the adventurer for years  – it’s almost like he’s rewarded for being an asshole.

Now, look, I understand, at least in theory, how the world worked back then for men vs. for women (hell, in some ways it still works the same way). Jamie is a wealthy, titled gentleman in 19th century England, and that means he can pretty much do what he wants, as long as it doesn’t involve buggery. Cat is privileged by her class but she’s still a woman, and as a married woman, she’s more or less Jamie’s property.  So her rights are a lot more limited than his (and in some key ways more limited than a man of any class in that time and place). So, is it realistic that Jamie can get a bee in his bonnet over basically nothing and disappear for five years, while Cat has to hang back at ye olde family manse, doing good works and improving the lives of her tenants as befits a romance novel heroine? Sure, it’s realistic (as far as I know). That doesn’t mean that I want to read about it.

In short (and this is perhaps where the novella length comes in) there was not enough developed characterization nor backstory nor…anything that really made the h/h’s journey from estranged to reconciled remotely satisfying. My grade for The Misbehaving Marquess is a straight C.