I liked everything about this book from the tall, athletic heroine who had some body issues but still loved herself to the baseball hero who was coming out of a bad place in his life. Most importantly for me, I got to watch as the two actually fall in love. The couple begins, not from a place of immediate attraction, but one of real antagonism. 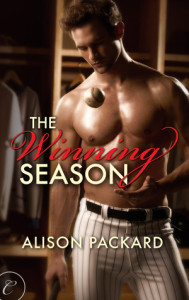 Kelly Maxwell’s sister, a beautiful actress, marries pro baseball catcher Matt Scanlon’s best friend in the book Love in the Afternoon. At the wedding, Matt says something terrible to Kelly about her looks. Even though Kelly started the barbed exchange by warning him that his behaviors would result in a trade, she doesn’t easily forgive and forget his remarks because Kelly has had body images all her life beginning with an eating disorder that ruled her teen years. Today, thirty years old, Kelly has leveled her nemesis (the eating disorder not Matt), landed her dream job as a publicist for the San Francisco Blaze, and is enjoying life with her friends and family.

Kelly’s life is made infinitely more complicated and less congenial when Matt Scanlon is traded to the Blaze. He was a former model baseball citizen and then a year ago went off the rails, lost his game and ended up getting traded to a team he doesn’t even like. Kelly is in charge of his rehabilitation. Not only does she remember how cruel he was to her back at the wedding, but he negates her every opportunity needs him to do more interviews, make him more likeable, but he refuses. What he wants to do is concentrate on his game.

There are two great conflicts here. The external conflict between Matt not wanting to do interviews and Kelly’s job which is to make the team look good through interviews, amongst other things, and the internal conflict involving Matt and Kelly’s emotional issues. The two spill over into each other.

Their work and their home life (they live within walking distance of each other near the stadium) bring them in regular contact. Matt feels chagrined about his treatment of Kelly and wonders why she, all six feet and sharp tongue, is getting under his skin. His usual type of small and blonde and perky is starting to lose their appeal. He can’t seem to stop staring at her long legs and her amazing backside. He realizes that he admires her dedication and her competitive spirit. Kelly is an awesome girl and so it pleases the reader to see Matt wise up.

Kelly is smart about her job and is shown both to be competent in dealing with reporters and athletes.  She stands up for herself but also isn’t afraid of intimacy.  Her body issues are recognizable but don’t over power the story.  She’s a tall girl with a solid, athletic build and while she can feel the occasional pang of envy at someone smaller and curvier, she doesn’t allow those feelings to bring her down.  I thought Kelly presented a great balance between insecurity and confidence.

Matt shows himself to be more than just a pretty face or an athlete. He hits it off with her parents and he comes to her with a genuine apology (not a grovel but a sincere, I’m sorry, I was an ass).  Matt does have a reason for his bad behavior and the past is part of his emotional journey.

What makes this even greater for me is that the sports in the book was so well done (and well integrated into the story):

“What’s your problem, Scanlon? You look like someone kicked you in the nuts.” Rizzo shot Gentry an amused smirk. Gentry was smart enough not to grin back.

“You’re my problem.” He fixed Rizzo with his patented stink eye. He’d perfected it over the years and had intimidated many of his opponents with it.

“Me? What’d I do?” Rizzo’s eyes widened with mock innocence.

“Don’t fuck with me,” Matt snapped. “If you pull that shit the next time you pitch I’ll leave you on the mound twisting in the wind.”

Rizzo shot him a confident grin. “I doubt that.”

“You shouldn’t.” He put his hands on his hips and glared at him. “What you know about the hitters in this league couldn’t fill a shot glass. And if you start questioning my calls again you’ll find out just how much I know about them because they’ll be hitting jacks off you all night. Or at least until Morgan pulls you out of the game.” He stared pointedly at Gentry. “The same goes for you too, rookie. I know what I’m doing. Don’t make me come out to the mound as many times as I did last night.”

“You’re full of shit,” Rizzo said with a sneer. “The Dodgers kicked your ass to the curb and we had to take you because Taylor’s out for the rest of the year. None of us want you here, Scanlon.”

“I’m here, so deal with it. And you know what? I don’t give a fuck what you think about me. I’m here to play and I’m here to win. If you cross me or question my pitch calls again, I’ll make you pay.” He paused to give Gentry a look of warning. “You want to test me? Go right ahead. I can be your best friend out there, or your worst enemy. It’s your decision.”

This was a trifecta for me – a great heroine, a realistic courtship, and the added benefit of a well integrated backdrop.  I hope readers pick this up. I think they’ll be thrilled with the adult romance.  It’s one of my favorite books of the year. B+

→ Jane
Previous article: REVIEW: A Woman Entangled by Cecilia Grant
Next Post: Tuesday News: STDs on the rise for a surprising part of the population; Book scanning coupon; Sourcebooks to distribute Xcite books