REVIEW: The Dangerous Seduction by A.N.Bond 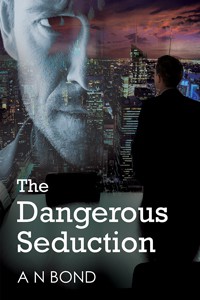 With a beautiful, doting fiancée and a dream job at one of New York City’s top law firms, life is going well for ambitious but inexperienced attorney, Ryan Paullson. Handpicked by his new boss, Joseph Van Aardt, to work on the firm’s biggest case, Ryan soon finds himself out of his depth and struggling with a dangerous and irresistible attraction to the charismatic and ruthless Van Aardt—an attraction that seems mutual.

Ryan and Joseph begin a secret affair as they work to build their case against controversial billionaire Jack McNeil. As their affair heats up, Ryan starts to fear how far Joseph is willing to go to win the case, and when two critical witnesses die under suspicious circumstances, Ryan doesn’t know whether to suspect McNeil or his lover. He wants to be with Joseph; he just doesn’t know how far he’ll have to go–or how far he’ll have to fall–to hold onto him.

I bought your book based on Kate’s review at Book Likes and not just because Kate is such a tough critic that I was intrigued to read a book she gave 4.5 stars. More importantly, her review was fantastic. It warned me about several things I could have disliked about this story, but I decided to give it a chance anyway. I am so glad that I did.

Let me now proceed with the very similar warnings. I do not think this book is a romance, and I also think that gay erotic fiction is a much better description, but I will be very curious to hear what other people who read it think. I know how many romance readers dislike cheating, and therefore I cannot stress it strongly enough – there is cheating in this novel (I think the blurb is very clear on this, but it never hurts repeating). It is unapologetically in your face and I loved every second of it. Now, I am a reader who wants to see more cheating in my romance novels, because I feel that such an event can be a great catalyst for the characters’ growth, but I want it well done and I was extremely pleased with the way it was done here.

Ryan is a very ambitious young lawyer who dreams of working for Joseph Van Aardt, but when he gets an interview, it looks as if he will be unable to keep the appointment because he has his brother’s out of town wedding to attend. Ryan mentally prepares to kiss the job of his dreams good bye, but he is in for a big surprise. Joseph is also in Texas and is ready to meet him in the city, which is close enough to his brother’s wedding, if Ryan can make it.

After a very short meeting (in which it looked to me like Joseph made up his mind a long time ago), Ryan gets the job. The job of his dreams is an extremely demanding position in the high powered law firm, but Ryan loves every second of it – never mind that he cannot spend nearly as much time with his sweet fiancé with whom he had been for six years when the story begins.

Big surprise: Ryan has a crush on his boss. The attraction between them is very clear and eventually ends up with them sleeping together. It was not clear to me whether Ryan was portrayed as bisexual or as a repressed gay man and I thought it was done on purpose because does it really change the end result? Ryan goes back and forth about gay being wrong, but he surely has no qualms about loving every second about being with Joseph and it is implied in the book that he was with at least one guy when he was young. What is also made very clear in the book is that Ryan knows that he is treating Daisy like crap and that he is an immoral piece of shit. And I loved it. There is no demonization of a woman in this book; there are no excuses, no justifications. Ryan loves Daisy, but he wants to be with Joseph more. I could not help but admire him for his honesty if nothing else. Actually, I also liked that he came clean after two months to Daisy. So yes, Ryan may be an ass but I respected him a whole lot more than some other heroes from m/m novels who tried to justify their cheating and get on their high and mighty horse.

“He knows he doesn’t deserve her. She’s a saint, so sweet and hardworking and loving. She supported him and his dreams, but he knows all that. He doesn’t need his mom reminding him of it. He’s well aware that he’s the one in the wrong, the dirty piece of work who’s cheating on her.”

Joseph seems to be attracted to Ryan, but what is it that he wants to achieve by continuing their affair? Why did he hire Ryan in the first place?

Ryan’s personal life is connected strongly to what is happening at Joseph’s firm where Ryan is working. In fact, the portrayal of ambitious NY city lawyers who are brilliant, talented and who want to achieve more was one of the biggest surprises of this book for me. I was half expecting to see them demonized just by the virtue of their profession, and because I belong to that profession even if I work in less stressed environment, I was worried. Instead I saw the people who work hard, who have power and money, who want more power, money and influence, but who are ready, willing and able to work even harder for that. I liked that a lot.

“Of course, I would be lying if I said I wasn’t ultimately in it for myself,” Joseph says, not breaking eye contact. But I earn my percentage when I win money for my clients. And the fact that this case is worth a lot to me professionally means that I’ll do everything I can to win it. You have my word on it”

Jack McNeil’s case, which Joseph is making all his associates work on for most of the story (no, it is not the only case they are working on, but it is the one which seems to get the most media attention when the story takes place) is the case which is the source of tension, mystery and suspense in the book. At some point or another, the most unexpected people end up being somehow connected to Jack McNeil, and one just cannot help but wonder who is going to win. At one point a witness and one of the associates end up dead due to suicide and accident respectively, but one cannot help but wonder whether those were truly suicide and accident. Joseph wants to win this case badly, but is the professional pride the only reason why he wants to do it?

As the affair between Joseph and Ryan heats up, the stakes in McNeil’s case keep rising, the characters become even grayer, and their actions even more ambiguous and this brings me to the ending of the story. It is not a cliffhanger ending, but it is a very open ending because it leaves a lot of important things unanswered and/or left to the reader’s imagination. Let’s just say that you can imagine the characters being darker than they were already portrayed in the story if you so wish or you can imagine things taking a less sinister turn. The question I asked myself is whether the ending was satisfactory for me and I had to answer – no, not completely. I would be perfectly fine if I was sure that the author signaled the darker turn in the end of the story, but as it was, it was too uncertain for me. I read the rumors that a sequel may be coming and I have to admit that if the story is continued, it would make sense for me, because too many things were left open.

One last thing – the book is paying homage to two movies “Dangerous Liaisons” and “The last Seduction”. I have not watched either of them, so I cannot attest to how close the parallels are, but I felt like the writer had a whole lot of fun writing an original story which may cause associations with the movies, no more than that. Our heroes at some point in time watch both movies and Ryan even comments about not wanting to be like a loser in “The last seduction”. I was amused about that, but as I said I have not seen these movies.

I am looking forward to this writer’s future works.