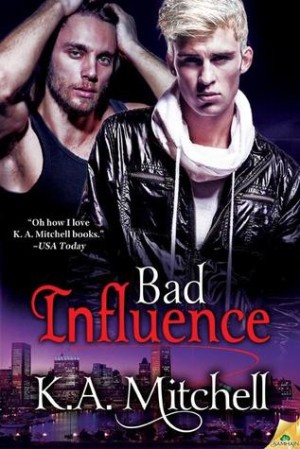 You’ve written some of my favourite books in the genre so I was excited to read your newest release, even though the Bad in Baltimore series has been a bit hit or miss for me. I’m not sure the book would work as a stand alone read.  Other couples from the series – particularly Eli and Quinn and Jamie and Gavin – are a big part of this story.

Jordan “Silver” Barnett has been a minor secondary character in the series – he’s a friend of Eli’s; they met at a shelter a few years ago. They have things in common. Both were kicked out by their families after they came out.  Silver (who has silver grey eyes and white blond hair, hence the nickname) left his home in New Freedom, Pennsylvania, after his parents sent him to “pray away the gay camp”. The conditions were cruel and he still bears the psychic scars from being shut in the tiny “reflection room”.  He escaped from the camp and went to his boyfriend, Zebediah Harris, who rejected him. 17 year old Silver hitched a ride to Baltimore – exchanging sex for the privilege – and ended up hustling on the streets to survive.  He had no ID, was under age anyway and was terrified his parents would find him and send him back to the camp.  After a while he stopped hustling, moving on to the somewhat ‘safer’ work of ‘modelling’ – aka porn.   Unfortunately, now at age 20, Silver is HIV positive.  He has only recently been diagnosed and he is terrified of passing the virus on to anyone.   He now works for cash under the table at a restaurant but he doesn’t have enough money for an apartment of his own and sleeps in a rented room in a shabby dwelling.

The story is told from Silver’s deep third person POV so I was immediately sympathetic to him.  His reaction, when he heard that Zebediah Harris was a friend of Quinn’s was to panic and run. He carries an incredible amount of anger toward Zeb.  Zeb was the only one who loved him truly but when Silver really needed him, he didn’t come through. My impression was that Silver didn’t quite blame Zeb for everything which came after but certainly Zeb’s rejection, added to that of his parents’ and his experiences in Baltimore have meant he is not trusting, he feels very isolated and he has few friends. He holds back, expecting people to crap on him because that has been his experience.  Seeing his friends happily coupled, he is jealous of their connection and feels further isolated (the “third” or “fifth wheel”).

Zeb recognises Silver and when the book begins, he follows Silver to where he is hanging out with some hustlers he used to know.  Silver is not there to sell his body; he’s just shooting the breeze but when the police come along, they assume Silver is soliciting Zeb and he gets arrested – and Zeb, because he can’t keep his mouth shut and pisses the police off, gets arrested too.  The big problem for Silver is the fake ID he’s using and that lands him in a ton of trouble.  He’s facing a year in jail and suddenly, life, which was ordinary before, looks desperately shitty.

So, Silver starts off as very sympathetic.  I was so deep in his POV that it wasn’t until Zeb told Silver a few home truths that the proverbial light went on over my head.

And it changed everything.

When Zeb and Silver met, Silver (then Jordan) was only 16.  He lied to Zeb, who was 22 and a teacher at another school in the district and told him he was 19.   When they were found out, Silver was sent to the pray away the gay camp and Zeb faced 10 years in jail and being listed on the sex offenders registry.  So it really casts a new light on Zeb’s reaction to Silver when he turned up, running away from the camp and  begging Zeb to run off with him.

Because the first part is told from Silver’s POV, it is absolutely clear that Zeb didn’t take advantage of Silver. That it was all consensual and, if anything, Silver was the seducer rather than the seduced.  Nevertheless, and to his credit, Zeb feels incredible guilt over the relationship.  He feels like a sexual predator.

Gavin (who is filthy rich) pays for a lawyer for Silver and the lawyer recommends Silver study for his GED and have a regular place to live and clean up his act before the court date – this will increase his chances of avoiding a jail sentence.  Zeb is a teacher and he helps Silver study for the test – which is really not much more than a handy excuse for the pair to spend time together given that Quinn is also a teacher.  The book doesn’t even try to disguise this though so I didn’t mind it.

The blurb suggests that Silver has a plan to exact revenge on Zeb.  I was glad that this didn’t really go anywhere – especially because I wasn’t at all sure that Zeb had done anything wrong in sending Silver away that night.

For me, the initial relationship between the pair was so messed up, it made it very difficult to accept them as a functional couple and believe in a HEA.  There were some things which made me feel a little better about it – they did confront the issues of their pasts and they did have a few difficult conversations and gave each other some hard truths.  They did forgive each other.  And, Silver, to his credit, did question his own responsibility in the underage relationship with Zeb.  Zeb had been doing his own penance from since before the book began. I didn’t think of Zeb as a sexual predator, which was something.  However, while the relationship was consensual, it was also inappropriate and it was difficult for me to accept a relationship which had begun on such terms as ever being healthy.

The story does have Silver opening up to friends and his chosen family (Eli, Quinn, Gavin, Jamie, Kellan and Nate, Marco) and accepting them more deeply into his life, as well as improving his lot materially and physically.  Gavin does play a bit of a white knight which strained my credulity at times, even as I was happy he did the things which did so.  Unfortunately, in real life, I think a lot of gay homeless teens don’t have a Gavin and I was always aware of that as I read. (Your Author’s Note in the back of the book explicitly acknowledges this and there is an organisation named for donations – www.yesdropincenter.org – and you indicate that a portion of the profits from the book will be donated there).

Zeb and Silver definitely had connection and chemistry and they made every effort to be honest and open with each other but I wasn’t confident at the end that their HEA would stick.  Partly  it was because I didn’t feel enough time was spent showing them relating to one another as adults, talking and dealing with things. They did deal with some things but not enough for me to think the HEA was solid. And, partly it was because of my inherent concern about the origins of their relationship (and I just don’t think I could get over that). Then again, Silver was 17  before they had sex and in many places that is over the age of consent and Zeb was never his teacher.  I think, for me, it’s more about the… mess.  Can a relationship – that started off in such messy circumstances, such threatening and heightened emotional circumstances – can a relationship like that flourish?   It’s a hard sell for me and I was unconvinced here.  Silver seemed so very young throughout the whole book;  imagining him three or four years earlier made him, in my mind, a child.

I think Silver’s HIV status was well handled and I appreciated the insight (so much so that I actually went back and edited a book review from last year on my blog where I had clearly had my head up my bottom) but it fell away toward the end of the book – Zeb and Silver were just going to “deal” but I would have liked some more explicit discussion about their plan going forward.  Partly, this was because it was identified as such a big deal, such an important issue, early in the piece, I felt that it didn’t quite get the same status later on.

Your books usually have some pretty hot sex scenes (something I unashamedly like) but the tone here was… sweeter I think.  The sex comes later in the book than in a ‘standard’ KA Mitchell book.  When it does arrive however, it is hot but there is also that sweetness which I really enjoyed.

Silver forgot everything he knew about getting a guy off fast and hard. He clung to Zeb’s hips, and Zeb’s hand slid through his hair. It wasn’t Silver giving a blow job, it was them doing something together. A steady bob at their pace. Silver flicked his tongue not for effect but for a taste, sucked for the silky press on his palate, for the sound Zeb made when Silver swallowed around him.

I enjoyed parts of the book but in the end my hesitation about the central relationship meant that for me this book is a C.