REVIEW: Packing for Mars: The Curious Science of Life in the Void by Mary Roach 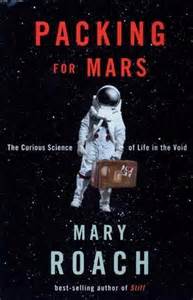 “Space is a world devoid of the things we need to live and thrive: air, gravity, hot showers, fresh produce, privacy, beer. Space exploration is in some ways an exploration of what it means to be human. How much can a person give up? How much weirdness can they take? What happens to you when you can’t walk for a year? have sex? smell flowers? What happens if you vomit in your helmet during a space walk? Is it possible for the human body to survive a bailout at 17,000 miles per hour? To answer these questions, space agencies set up all manner of quizzical and startlingly bizarre space simulations. As Mary Roach discovers, it’s possible to preview space without ever leaving Earth. From the space shuttle training toilet to a crash test of NASA’s new space capsule (cadaver filling in for astronaut), Roach takes us on a surreally entertaining trip into the science of life in space and space on Earth.”

I honestly can’t remember when Mary Roach’s name appeared on my radar but on the strength of lots of good reviews, I’d bought two of her books and put them in my TBR e-pile. After starting, and for various reasons almost immediately stopping, three romance books in one day, it made me think I needed a palate cleanser.

When I saw a recent interview with Roach at Mental Floss, a light bulb clicked on. What I ought to try next should be a Mary Roach book. “Packing for Mars” turned out to be just what I needed.

What a fun and funny yet informative book. Roach makes the minutia of what has already gone into the thought processes of the various space agencies of the world fascinating as well as approachable for the average lay readers. If you’ve ever wondered about how some aspect of daily life would be – or already has been – translated into a gravity free (actually most of what has been done so far is not totally gravity free, it’s more gravity lite) process, wonder no more as I’ll bet Roach covers it. I was amazed at the specialties of various NASA employees and how they’ve spent years and decades of their lives researching and refining not only the big but also the humble necessities needed for humans to boldly venture out past our beautiful planet.

Some of this research is carried out in various government labs of different countries, some on the “Vomit Comet,” and some was done by the astronauts and cosmonauts in “runner-up” missions that predated the “one giant leap” taken by Neil Armstrong. The 14 days of Gemini VII endured by Frank Borman and Jim Lovell sound like one layer of hell after another. The various means used by JAXA to winnow down the Japanese applicants aspiring to become astronauts is ingenious. The fact that many of the early people involved in determining the type of food eaten aboard the NASA missions were actually Air Force veterinarians says a lot about what these men were forced to consume. Yes, a version of Astronaut Chow was proposed and, thankfully, shot down.

Potential readers should be aware that Roach never shies away from digging deep for answers to questions that might not be appropriate dinner conversation. Frankly I was astounded that some of these people would still have jobs after what they fessed up to. Often gross but always engrossing nonetheless, this book should answer many if not all of those niggling questions you’ve always wanted to know about life in space. B+