REVIEW: The Curse of Chalion by Lois McMaster Bujold

Last year my husband and I started reading your fantasy novel, The Curse of Chalion. We read it aloud to each other but only got as far as the 34% mark before we decided the pace was too slow. 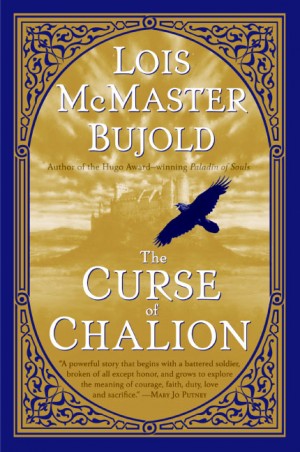 I posted about this in my reading list post from last summer, and several readers assured me that if I continued, I’d see the pace accelerate. Then, earlier this year, some months after we put it down, my husband began reading it again and told me that ironically, we’d put it down just at the point when the story was about to get exciting.

This led me to pick up The Curse of Chalion again, and start reading from the point at which we quit. Since writing this review necessitates piecing together two different reading experiences that took place a year apart, I’ve decided to structure this review a little bit differently than I usually do, by quoting from my old post and giving my current thoughts on some of my previous observations.

The novel begins with its protagonist, Cazaril, wandering the countryside of Chalion homeless and wearing rags. Charity and the death of a well-dressed stranger bring Cazaril a bit of coin and good clothing, and he uses these to make himself presentable to the provincara, a noblewoman whose household he once served, in the hope of earning a position with her and thus, some food and shelter.

Although I read it over a year ago, I still recall this portion of the book fondly. I loved the way Cazaril’s weariness came across, and how, at his most exhausted, he found the courage to try to improve his circumstances by approaching the provincara, though in his humility and modesty, he never expected to reach the heights he ascends to later in the book.

Eventually Cazaril, himself a member of the nobility but also a war veteran fallen on hard times, succeeds beyond his wildest imaginings—and also beyond his desires. He becomes tutor to the royesse Iselle and her lady in waiting Betriz, to whom Cazaril is attracted. Unfortunately this position beings him to Chalion’s royal court, and to the notice of old and powerful enemies who believed him dead.

Cazaril was a sympathetic protagonist, weary but also wise and, despite a great deal of fear, courageous.

I still agree with this description of Cazaril, but I’ll now add that he is perhaps too wise for his years. Though only in his thirties, he comes across as more mature than most people I know. In addition, the description of his gray beard made it difficult for me to picture him as a man still in his thirties, and every time his age was mentioned I got a jolt. I think this may have been intended.

I also think that Cazaril was almost too good and too fortunate. What spares him from the Marty Stu label is that he suffers, and that he has moments of wanting to be selfish, though he always ends up putting his duty to the royesse (princess) Iselle ahead of his personal wants.

The side characters were likewise interesting and appealing, and the writing lovely.

With regard to the side characters, I like most of them, especially Iselle and Betriz, but also Cazaril’s friend Palli, Iselle’s brother Teidez’s tutor Dy Sanda, and the mysterious Umegat, keeper of the royal menagerie.

Iselle’s brother Teidez was a character I wanted to see show more growth than he did. I also wanted to see the king (“roya”) Orico display a sign of backbone, but by the end of the book I understood why he as he was.

One of the villains, Lord Dondo Jironal, was a bit too repugnant. His brother, Chancellor Martou Jironal, was a more interesting villain in terms of his personality. I loved the way a character from Cazaril’s past reappears but felt this person was a little too conveniently perfect. For the most part though, the characterization in this book was superior.

While the mythology of the world was not as fascinating as some I’ve come across, it was fresh.

I have to take the first part of this sentence back, because the mythology became a lot more fascinating in the latter two thirds of the book. I especially liked the idea that sainthood is as much a curse as a blessing, as well as the idea that the gods of this world aren’t above humanity, but amidst it, if only people could look the right way and see them.

I was a bit annoyed by the use of terms like roya and royina where perfectly sound words like king and queen could have served, or provincar in place of duke, but appreciated the promise of political intrigue, which I generally like.

I got used to the made up terms, and there was much more political intrigue in the latter two-thirds of the book than in the section I read a year ago. The plotting was impressive, with several twists and surprises, some of which I saw coming and others of which I did not anticipate at all.

The main problem for me was the pacing. This novel was slow. And when I say slow, I mean really slow. Court life was portrayed in painstaking detail with a lot of ominous goings on but few actual turning point events.

The pace sped up considerably as the novel continued, but the slow pace in the first third is my main issue with this book. We don’t learn what the eponymous curse of Chalion is until the 45% mark and I really wish the first third of the book had given me a better idea of what to expect from the rest of it.

My other issue was the ending. Without giving too much away, I felt that Cazaril had a great deal of good fortune, and I might have found the novel more convincing had he died at the very end, after seeing the curse lifted.

The happy ending made me very happy for Cazaril, who deserved every bit of good that came his way. But I can’t help but feel that an ending in which he sacrificed his life would have been more fitting, if sadder.

The last time I tried to read The Curse of Chalion, my verdict was as follows:

This had all the makings of a good book otherwise, and we may even go back to it at some point, but since we’ve moved on to other books it gets a DNF.

This time, I’m very glad we did go back since I enjoyed and appreciated the rest of The Curse of Chalion so much more. This time it gets a B.