What Janine was Reading in June and July of 2013

With only a few exceptions, 2013 continues to be a disappointing year for me. Here’s what I’ve been reading lately: 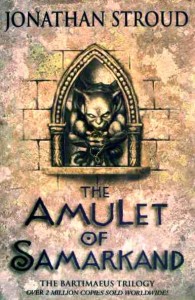 The Amulet of Samarkand by Jonathan Stroud

This novel is narrated in alternating first and third person. The first person sections are in the POV of Bartimaeus, a djinni whom twelve year old Nathaniel has summoned and tasked with stealing the amulet of Samarkand from Simon Lovelace, a powerful magician who stole it himself. The third person sections let us into Nathaniel’s head – it turns out that he wants revenge on Lovelace for an injury to his pride.

I can’t decide whether this book is middle grade or young-ish YA. On the one hand of the two main characters is a djinni and the other is twelve years old. On the other hand, the world this novel is set in is quite dark. Some parts of the novel are riveting, while others drag. There was very little appreciative growth in either Baritmaeus or Nathaniel, but this is only the first installment in a trilogy.

Although the characters themselves didn’t change much, what did change was my perception of them. I began the novel thinking Baritmaeus wasn’t that nice and Nathaniel a lot more sympathetic. By the end of the novel I saw this in the reverse. That impressed me. But though the book was written competently, and there were some funny jokes and amusing footnotes, some of the humor struck me as mean spirited and much of the book felt grim. C-/C. 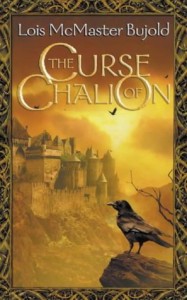 The Curse of Chalion by Lois McMaster Bujold

My husband and I started reading The Curse of Chalion to each other (something we do from time to time) but only got through a hundred and seventy pages. The novel begins with its protagonist, Cazaril, wandering the countryside of Chalion homeless and wearing rags. Charity and the death of a well-dressed stranger bring Cazaril a bit of coin and good clothing, and he uses these to make himself presentable to the provincara, a noblewoman whose household he once served, in the hope of earning a position with her and thus, some food and shelter.

Eventually Cazaril, himself a member of the nobility but also a war veteran fallen on hard times, succeeds beyond his wildest imaginings—and also beyond his desires. He becomes tutor to the royesse Iselle and her lady in waiting Betriz, to whom Cazaril is attracted. Unfortunately this position beings him to Chalion’s royal court, and to the notice of old and powerful enemies who believed him dead.

Cazaril was a sympathetic protagonist, weary but also wise and, despite a great deal of fear, courageous. The side characters were likewise interesting and appealing, and the writing lovely. While the mythology of the world was not as fascinating as some I’ve come across, it was fresh. I was a bit annoyed by the use of terms like roya and royina where perfectly sound words like king and queen could have served, or provincar in place of duke, but appreciated the promise of political intrigue, which I generally like.

The main problem for me was the pacing. This novel was slow. And when I say slow, I mean really slow. Court life was portrayed in painstaking detail with a lot of ominous goings on but few actual turning point events. I’m sure it didn’t help that my husband and I read this book aloud to each other, which of course, made the process of reading slower than it would otherwise be. This had all the makings of a good book otherwise, and we may even go back to it at some point, but since we’ve moved on to other books it gets a DNF. 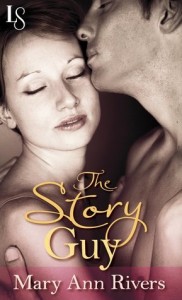 In this novella, Carrie, the heroine, meets Brian through an online personals ad. The ad stipulates that they will meet for an hour once during lunch a week to kiss and he will not touch her below the shoulders. If one of them wants to break it off they will simply not show up the following week. Carrie, who cries when her best friend exhibits married bliss, agrees to this, and when they meet it turns out Brian is a great kisser and the chemistry between them is remarkable. So it’s not surprising that she soon begins to want more.

Jayne and Dabney graded The Story Guy in the A range and I can see why. The author has a strong voice and the dialogue is especially charming. The kisses are hot and Brian at first comes off like a quirky and mysterious character. The novella kept me turning the pages and I wanted to like it too, but the more I thought about The Story Guy, the more it fell apart.

The characters did not feel fleshed out to me. Carrie seemed to exist in the vacuum of this story, and not to have lived much outside of it, despite being in her thirties. Brian’s life was even more circumscribed, though in his case there was a better reason for that.

A lot of my problems with this novella boil down to the way Brian’s secret was handled, and how a third character came across to me as more of an obstacle to the HEA than a person. I was annoyed with Carrie for pushing at Brian’s boundaries early on, and annoyed with Brian for deciding not to “burden” Carrie with his life, without letting her make her own decision, later on. Still, because of the pretty writing and the hot kisses, this gets a C/C+. 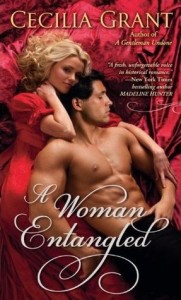 I loved Grant’s first two books so much that it hurts to write this mini-review. But well, everything about the first half of A Woman Entangled was so careful.

The heroine was careful—careful not to set a foot wrong by paying attention to any unsuitable man’s suit, including the hero’s, careful not to miss an opportunity to curry with her aristocratic relatives who had cast out her father for marrying her mother, an actress. Careful to cultivate her beauty and exploit every opportunity that could bring her into the social circle of a titled man who would consider marrying her and by doing so, improve her family’s circumstances.

The hero was careful—careful not to put a nose out of joint by reminding anyone he was the brother of the hero from the previous book, who’d married a courtesan, careful not to miss an opportunity to work, as he, though trained as a barrister, had so few of those now. Careful to cultivate his connections and exploit every opportunity to further his political ambitions, which certainly meant refraining from taking advantage of the heroine, his mentor’s lovely daughter.

The writing too, seemed careful, as though bringing a bull into this china shop would be the literary equivalent of stepping on a landmine, when it was just exactly for what I thought the story needed. Even the settings, mostly interior in the first half, seemed as confining, as stifling, as the characters’ circumstances were to this reader.

I heaved a sigh of relief when these two finally shared a dangerous kiss halfway through. I gulped a breath of fresh air when the hero’s brazen former lover appeared, and though I wished the book had been about her, I was still grateful, because her entry into the story provided the narrative engine the novel had needed and that felt like all the windows had suddenly opened in a stuffy room. From that point on, the book found its bright spots and fresh angles, and became a hell of a lot more sexy and satisfying. Ultimately, I was glad to have read this story. C+/B- 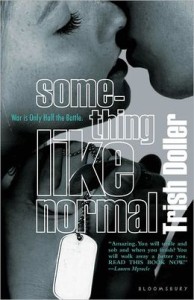 I picked this up this –NA? YA?– story of a young marine on leave, grappling with PTSD and messed up relationship and family dynamics on an ebook sale a while back, and finally got around to reading it. Travis comes home to a brother who stole his girlfriend while Travis was in Afghanistan, a father who is cheating on his mother, and a mom who wants to mother him when he doesn’t know how to allow himself to be mothered anymore.

At first I wasn’t sure if I would like this short novel. Travis, the main character, wasn’t always such a nice guy and didn’t seem able to keep his hand off Paige, the ex-girlfriend who had hooked up with Travis’ brother Ryan in the hopes that Travis would want her back. Travis’ narration wasn’t always persuasively male to my ear, especially in the beginning. Some of the side characters, like Travis’ father and brother, even his mother, weren’t fully convincing to me either.

I did find the military details very believable, although that’s not a subject I know much about. And I really liked Harper, the girl with whom Travis gradually develops what may be his first meaningful relationship, and the backstory they shared. When Travis’ marine friends came to visit him, the story found its footing, becoming a lot more real and engrossing. Its ultimate conclusion packed a serious emotional punch that felt true and honest. I cried a lot, without feeling emotionally manipulated. This one rates a B- from me.

Also read and reviewed during this time period:

And what about you, readers? Have you read anything exciting lately? Let me know.