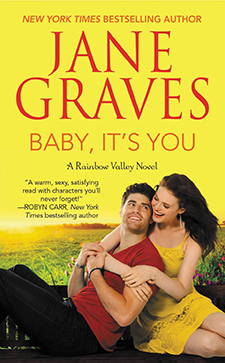 With only the wedding dress on her back and her honeymoon luggage in the car, Kari Worthington is running away. Determined to put her controlling father, her rigidly structured life, and the uptight groom she left at the altar in her rearview mirror, she escapes to the Texas Hill country . . . and lands on a tall, dark, and gorgeous winery owner’s doorstep. All she needs is a job and a place to live until she can get back on her feet. So why is she fantasizing about losing herself in his powerful arms?

For Marc Cordero, freedom is so close he can taste it. He’s devoted his life to managing the family business and being a single dad. Now with his daughter away at college and his brother taking over the winery, Marc is ready to hop on his Harley for parts unknown-until a runaway bride bursts onto the scene. Free-spirited and tantalizingly sexy, Kari excites him like no other woman has before. But when irresistible passion turns into something more, will Marc give up his future to take a chance on love?

The blurb and what it brought to mind grabbed my attention when this book was offered to us for possible review. The idea of a runaway bride in her wedding dress made me think of “Smoky and the Bandit” with Sally Fields ending up in a car with Burt Reynolds while peeling off her wedding dress as they roar down the back roads of 4 southern states with Sheriff Buford T. Justice hot in pursuit. Okay so the book ended up having almost nothing more in common with the film but it did make me want to read it.

Well the actual book starts off great. I loved the humor, I loved the heroine, I loved the hero’s laconic way of speaking and acting which brings Kari up short – when pressed to help her out of her mud caked wedding dress with its millions of small buttons down the back Marc thinks a second and then replies that no …, no he really doesn’t have to. I loved the pet themed B&B Marc leaves Kari at and I adored Gus, the proprietor who is obviously storing up the whole encounter for the next day’s gossip sessions in this small town. I was floating on a happy cloud.

Then the cloud started raining just a little as things slow down a mite. Two one note villains appear – and really all the bad guys in the story are fairly one dimensional – but thankfully disappear soon after and never bother us again. Kari struggles to fit into a job she’s not suited for and while Marc begins to show more of his responsible side in helping her out, getting a plan for her life and dealing with her blistered feet, he’s not quite as funny to me as he goes about it. Then comes a scene that should clue in advanced Romance readers of a plot point to come. There’s a lot of talking going on among these people but not much listening.

Things then get really messy with everyone coming home to roost at various times which makes for life altering changes and seeing dreams/promises in a new light. I got mad at some of these characters. Well, I got mad at most of them but then I realized that the emotions and reactions are so realistic that my reaction is belief in what’s happening on the page rather than eye rolling. Real, strong emotions can get messy. Life is messy. Not everyone behaves well when things don’t go as they’d like, expect or think they want. So, this is good. Exasperating at times but still good.

The plot snarls get untangled quickly with the page count running out but it’s done in believable ways – Angela’s junior college plan, Daniel’s happiness at Marc finally acknowledging faith and pride in his IT accomplishments, Marc figuring out that the open road can be lonely and it’s nice to live around friendly faces who know him and whom he knows and that he’s excited about the future because he’s good at what’s about to come. Kari realizing she doesn’t want to leave Rainbow Valley – well, she’d kind of already realized that earlier. It’s a good lesson in what we think we want may not always be what we need or – even what we really want. After the book took a turn from the fantastic opening, I wasn’t sure I’d like the change but the story ended up being deeper and more realistic than it would have otherwise been. B

→ Jayne
Previous article: REVIEW: Son of a Gun by A.M.Riley
Next Post: Daily Deals: Mystical things and a box set