Divorced, middle-aged Rachel Brinkerhoff, a Jewish matchmaker from New York who hopes to remarry, moved to Toronto for a fresh new start with her business and her love life. But no one told her that female-aversive Toronto was BYOB – Bring Your Own Boy. She partners with an Indian and a Muslim lady who want to help Canadians arrange marriages for their often-recalcitrant children and who secretly wonder over the beautiful matchmaker’s datelessness. But then an earthquake shakes up Toronto in more ways than one, and the next thing you know, a public fountain turns into the Fountain of Youth, an army of misfits turn up to stake the world’s weirdest Native land claim, and worst of all, a beautiful sensuous baby-hating woman is stalking Toronto’s virgin males and seducing them with horrifying consequences.

Can a drop-dead gorgeous, highly neurotic American and her friends save Toronto’s babies and virgins from certain destruction, or will they have to call in a cure that’s worse than the curse?

We get all kinds of author submissions to our DA site. Most are romances with the occasional odd ball pitch thrown in – which sometimes makes me wonder if people actually read our submission guidelines. When I read the blurb of your book SUMER LOVIN’ I thought, “Hmmm, that’s different. Let’s look at the excerpt.” When I’d finished reading that – and caught my breath from laughing – I knew I had to try this book. This one is certainly odd ball, but in a wonderfully weird way.

I will admit to enjoying humorous, wacky books. Not a steady diet of them but one every now and then spices up my reading list. Humor is definitely a YMMV aspect of writing but this book had me laughing out loud.

“Dave the Tarantula Guy wasn’t at all convinced speed dating was a good idea, but Dave the Beowulf Freak wanted to try it and had bribed him with a pitcher of Labatt’s Blue. It seemed a bit false to spend eight minutes talking to someone and trying to make a snap decision on whether you wanted to date her or not. Without question, neither of these two nerds had the foggiest clue what they really wanted in a woman. Dave the Tarantula Guy was from Alberta, where men were men and so were the women, and Dave the Beowulf Freak was from Newfoundland, where men were men and the sheep were nervous. The tarantula was from Brazil.”

There is lots of stereotyping going on in the story but since just about every group mentioned has shots taken at it, I’m okay with it. A city with IT guys who are often named Dave? Why not – and when I thought about it, I realized my company’s own IT department has its fare share of them. A former NYC Jewish matchmaker? Sure but then she also looks like Elizabeth Taylor and her New Yawk accent only gets pronounced when she’s stressed. Rachel’s matchmaking/marriage arranging partners are Indian and Pakistani? Yes, but here are Amita and Mahliqa starting up their own business and very much their own women, thank you. The U.S. as a nation of whack jobs? I’ve got to agree with the Toronto DJs comment “Yeah, man, who needs TV when we’ve got Americans?” And you certainly avoid the usual typecast villain by featuring a Sumerian demonic demigoddess who is beautiful enough to stop traffic and reduce men to mush. I’ll just hope that Toronto isn’t as devoid of men who are interested in women as the book suggests. 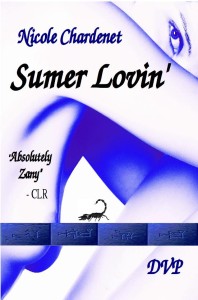 The fantasy element of the book is distinct. If readers are tired of vampires, shifters, angels or zombies – and for the life of me, I still don’t “get” zombies – they need look no further than the Sumerian pantheon presented here, a Fountain of Youth, ancient warriors from the Underworld and ley lines. After researching a little bit about Lamashtu and Pazuzu I have to say, “Holy shit, what were those Sumerians smoking?” Or maybe they came up with those two beings after a weekend bender which resulted in the Mother of All Hangovers. Readers who are very religious might want to think twice about trying the book as Christianity, Islam and Judaism all come under the gun but then its not as if you single one out for any worse treatment then another.

There is a lot going on in the story. Lots of characters, lots of plot threads, lots of evilness that will need to be vanquished and I think you juggle all these balls pretty well. Toronto is faced with near utter destruction at the hands of an extremely vengeful, demonic demigoddess and then further threatened by the “almost as bad” cure. It’s kind of a toss up as to which god and exactly what kind of destruction they promise to unleash is worse. The characters who provide salvation are, thank goodness, not entirely deus ex machina, having been introduced early in the book. I hate one type of them as much as the next person but after her stunning triumph, I enjoyed her celebratory victory dance and (theoretical) taunting “I so kicked the skanky scorpion bitch’s ass! I rule, I rule, lalalalala!” Not enough to “high pedipalp” her but I’d certainly buy her dinner. The actions of the second set of little saviors fall under the description of “Who knew they would do that but, boy, wasn’t it handy for the story?” Thanks, but I think I’ll stick to cats as pets.

But where’s the romance? Will Dave the Virgin find a woman who doesn’t run screaming? Can Rachel get past her predilection for big, strong, manly men who ultimately turn out to be losers? Will the women of “Love Comes Later” be able to find mates for Alexis, Dave the Tarantula Guy and Dave the Beowulf Freak? Ah, it all arrives near the end but is foreshadowed from early on. Since this isn’t strictly a romance book (ya think?), I’ll accept the romantic element instead of insisting on lotsa romance. The manic hysteria and humor of the rest of the book more than made up for any lack. B